Young adults vs. credit cards: Why it’s a struggle to pay bills on time
By Joshua Eferighe May 17, 2019

In the middle of everything else that seems to be going wrong in America, Bloomberg decided to inform everyone that more than half of the U.S. millennials that own a credit card are having trouble meeting payments.

In a report published yesterday, the finance publication reported that the charge-off rate or the amount of debt a creditor has decided is unlikely to be collected divided by the average outstanding credit card balances owed. Additionally, the first quarter increased to the highest level in almost seven years.

The culprit is arguably the last group of individuals we need in debt: the generation that’s got next.

Furthermore, 8.05 percent of outstanding credit card debt among Americans between the ages of 18 and 29 was delinquent by at least 90 days. Those are the highest level since early 2011, according to data released this week by the Federal Reserve Bank of New York. 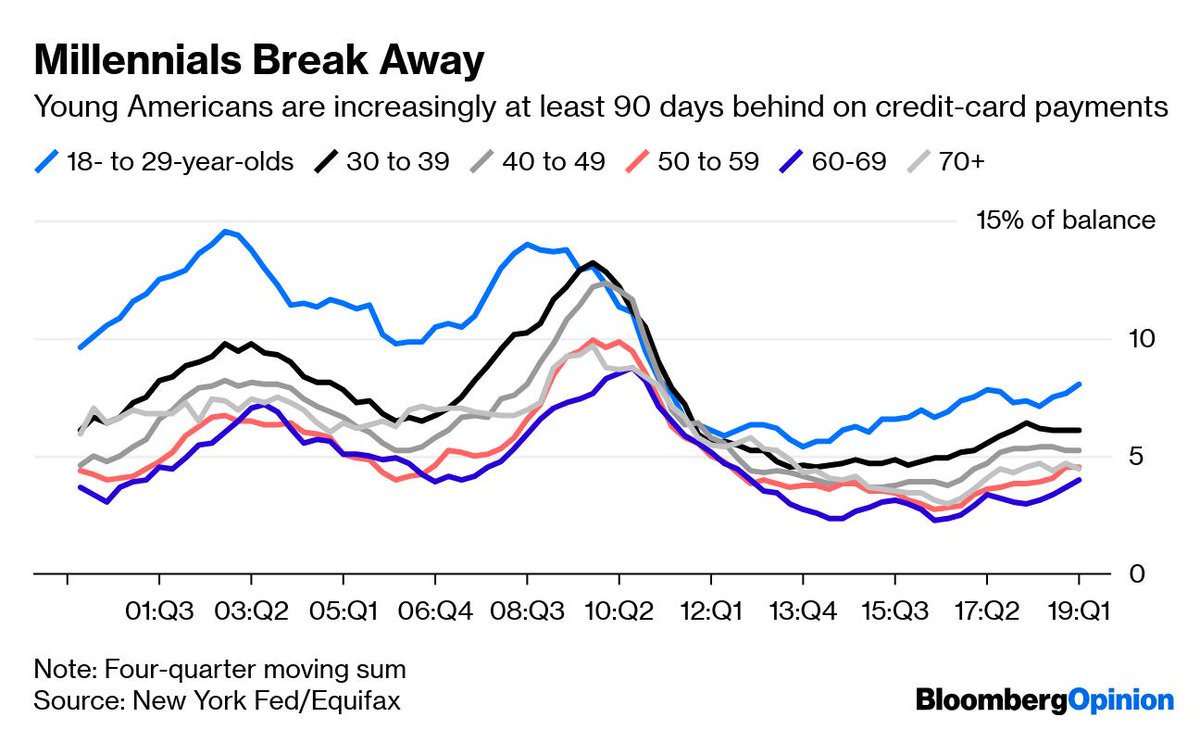 According to a report by CNBC, four in 10 millennials say day-to-day expenses such as groceries, child care and utilities are their biggest reasons for carrying a credit card balance. And about 20 percent cite emergency situations like medical bills and car repairs.

“The inability to get over that debt hurdle can be a pervasive problem,” Rossman says. That’s because millennials tend to have other debts, such as student loans, as well as high housing costs. About three out of four millennials say they’re juggling some type of debt, according to a recent LightStream Survey conducted by the Harris Poll.

The danger of these late and failed payments is not immediate per se but lies in the future. The average credit card APR is at a record-breaking 17.57 percent, thanks to creditors using compound interest, which works against you in a hurry.

Not to mention, other debts, like student loans and high housing costs, make payments even tougher. When you realize that repayment takes the majority of you to check and you still have other responsibilities, a tricky game of priorities ensues.

About three out of four millennials say they’re juggling some type of debt, according to a recent LightStream Survey conducted by the Harris Poll.

It’s why politicians like Representative Alexandria Ocasio-Cortez and Senator Bernie Sanders are calling for new legislation that caps credit card interest rates at 15% and it’s why millennials, as opposed to Gen-Xers, are fretting.

So what can and should millennials do?

Well, most experts advise having an emergency savings fund equivalent to three-to-six months of living expenses set aside in an account. This creates a buffer between credit card users and high-cost credit card debt. Other ways are to consistently save a small percentage of your paycheck by setting up automatic transfers.

As we enter shakier financial times, credit card holders have to be intentional about methods of slowing down, making a dent or some kind of action to help themselves in the very near future.

It’s tough, but trust, you’re not the only one.