Why Trump’s Nazi-style propaganda is only the tip of the iceberg
PHOTO CRED: Project Trumpmore
By Sloan Varunok July 3, 2020

From Trump’s Nazi-style propaganda to PePe memes, everywhere you look, you’re being called to do something.

Most of these postings are ads, but they’re not far from propaganda. They use the same techniques, pulling at your emotions, appealing to your reason, and moral high-grounding.

However, you may observe propaganda more often than you may think.

The history of propaganda?

Propaganda is any information presented in a way meant to sway you toward a particular opinion. Often, when we agree with the message, we will see it as truth rather than a rallying cry.

Much of the time, it intentionally misleads or contains misinformation.

Propaganda uses the same techniques as do advertisers. If they’re proven to work, why wouldn’t they?

The above picture is a piece of propaganda from possibly the most disastrous enacted event in America’s history. Made to incite celebration across the country this poster for the Thirteenth Naval District, United States Navy, shows a snake representing Japan being bombed by an eagle.

With a message so simple, it just worked.

This piece plays on the American sense of patriotism and duty to country. If you don’t join, you’re no patriot (read not a man). By tugging at the manhood of America, James Montgomery Flagg’s poster was printed over four million times. 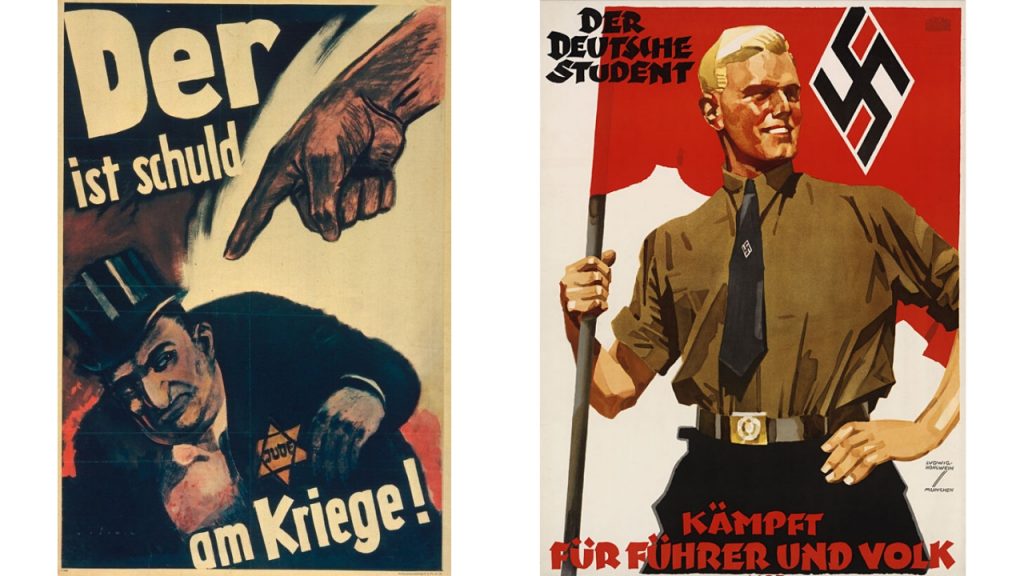 Just as often as it’s used to inspire, propaganda stokes fear. Above are Nazi propaganda posters, the left demonizing Jews. By scapegoating the Jews for Germany’s economic depression, Hitler was able to rally the people behind fear.

The Nazis were skilled at both kinds of sentiment stirring, however. The right poster shows a handsome, fit, blonde-haired, blue-eyed, and smiling Hitler loving youth. By appealing to the Aryan sense of superiority, the poster essentially says “this could be you.”

While these posters weren’t common in our lifetimes, propaganda never went away. It has only taken new forms. In its present form, they’re memes, weaponized for an agenda. It should be noted that this happens on both ends of the political spectrum. 4chan’s Politically Incorrect board (/pol/) was instrumental in the 2016 Presidential Election. By weaponizing memes, which are used to spread humor, users in /pol/ made themselves heard and seen. While many can enjoy them in an ironic sense, right-wing trolls worked on several fronts.

Being that the SJW crowd is notoriously easy to offend, people who may not have even believed the message still shared the memes. Perhaps some of these people didn’t realize what that would really do.

By being the most offensive memes, the Trump-supporting kind got the most shares from right-wingers and trolls alike. By appealing to fans of offensive comedy, ironic support turned unironic in many cases.

The campaigns by the left did not have the same effect. Being that the memes shared were all focused on Trump, he got the most coverage.

An important part to remember is who exactly creates these pro-Trump memes. It was found in 2016 that Russia was behind a great deal of these. It was done in the same spirit as propaganda of old: prop up Trump and attack Hillary Clinton.

By pairing the strong sentiment America has for the troops with misleading information, you got a propaganda salad.

All agendas built on fear need an enemy to scapegoat. In recent years, immigrants and Muslims have carried the brunt of this. The Trump administration is trying to add Antifa to the terrorist organization list… with a Nazi symbol.

The President of the United States is campaigning for reelection using a Nazi concentration camp symbol.

Trump & the RNC are using it to smear millions of protestors.

Their masks are off. pic.twitter.com/UzmzDaRBup

Trump, himself, has engaged in quite a bit of propagandizing in his campaign. We all know he tends not to fact check himself before speaking, and speaks in generals.

His campaign platform of “Make America Great Again” harkens to that of the Ku Klux Klan in the 1920s. In an interview with NPR, Jonathan Greenblatt, CEO of the Anti-Defamation League, said,

“Intentionally or otherwise, using symbols that were once used by the Nazis is not a good look for someone running for the White House. It isn’t difficult for one to criticize a political opponent without using Nazi-era imagery.”

Amid the state GOP county chairmen’s flap over the “Jihad Squad” faux-movie poster, there’s this from the Kankakee County Illinois Democrats. (h/t @GregHinz at @CrainsChicago) pic.twitter.com/fw3UHImhQE

Trump’s platform was built on anti-immigrant and xenophobic language. Even with his denouncement of them, he speaks their language.

He benefits from their support. With an emphasis on patriotism and returning to a “better time,” the slogan romanticizes America’s racist past.

And while I've taken screenshots, here's the link to see it for yourself.https://t.co/hMMiNEdqqh

Literally every week Trump has a new Nazi propaganda promotion. Am I the only one seeing this? pic.twitter.com/gv8KiRUvsj

This official t-shirt from the Trump campaign knew who they were appealing to. The resemblance is striking.

The left-wing attempt at propaganda was to spin, spin, spin. Anything bad about Trump shared on Facebook was taken as fact, while anything Hillary did “wasn’t that bad.”

This only fueled the fires of right-wing trolls.

Being that we live in an age of misinformation, the truth can be hard to find. When you read a catchy headline online, ask yourself: what am I being made to feel? Is someone made out to be the enemy?

These articles get so many clicks because of our emotional investment. We’re committed to the idea often before reading, let alone verifying. We’ve all been guilty of this.

It’s paramount to look at multiple sources. One way to do this is to paste the headline into Google and compare results. If there are several sources writing about it, there is a bit more credence to it, but not enough. The source is key itself.

Previous ArticleWhy we must teach the youth resilience and determination through sports
Next ArticleWhat the white couple in St. Louis brandishing guns says about society
MOST POPPIN’