This is (Gambino’s) America: How Donald Glover can do no wrong
FacebookTwitterLinkedinReddit
X

Donald Glover is having himself one hell of    career. The dude has officially reached a place where he can do no wrong.

Since last Friday he dropped a new single “This Is America,” hosted SNL, debuted two new tracks, then dropped the craziest music video of the year. Not to mention, the season finale of his hit show Atlanta aired last night, but more on that later.

Although we didn’t need much more convincing, “This Is America” has solidified Gambino as THE definitive artistic influencer of our generation. The song and video have become an instant cultural phenomenon. Also, the song itself is fire.

The video is full of hidden messages, metaphors, and symbols. They reference a range of topics from gun violence, the country’s history of racism, and the role of social media.

Twitter, Reddit and other corners of the internet have taken the past view days dissecting the shit out of the video.

Glover’s series of successes has been a refreshing diversion from the Kanye West sunken circus that we were getting hit within the previous weeks. As a reminder, dude basically told us he supported Donald Trump, gave some crazy-ass interviews, and released an absolute trash “scoop-di poop” song (maybe as a joke).

The last couple of weeks are pretty much summed up by this Tweet.

Kanye poked his head out after not being in the public eye for a while and tried to shake things up and change the way we think just by saying some outlandish things. Instead, he got brushed off as just being a nut and completely losing his shit.

Meanwhile, while Kanye was making headlines for being a babbling lunatic, Gambino was plotting his latest conquest. A well thought out, extremely layered and well-crafted song and music video.

These recent events mark a seismic change in the way the general public views both artists. Kanye was once one of our most beloved figures in hip-hop, making classic albums and over time becoming a household name.

Kanye first burst out on to the scene with his timeless track “Through the Wire” and debut album The College Dropout. He became an instant success and spent the next decade or so taking over the rap game.

On the other hand, Gambino was never really taken seriously as a rapper. He first emerged with fun and goofy songs like “Freaks and Geeks” and “Bonfire.” His reputation as a jokester was just reinforced by his acting career, which included his role on NBC’s Community as Troy Barnes.

Somewhere along the line, Glover decided that he needed to take his acting, writing, and musical careers into a more serious direction. After leaving Community he released 2013’s Because of the Internet which solidified him as one of rap’s next rising stars.

At the same time, Kanye was continuing his dominance over the game and transforming himself into a pop culture superstar.  He married Kim Kardashian, started work on his clothing lines and continued to put out great music.

Then in 2016, West released The Life of Pablo, a good album, even by Kanye standards. But we all started to see the writing on the wall. This guy was losing his f*cking mind.

He was constantly reworking and releasing the album until it finally matched his ultimate vision. He even raps about his struggles with mental health on a few tracks.

As we all witnessed Kanye’s very troubling and all too real public meltdown, Gambino shocked the world with his 2016 release Awaken My Love. Wait, that corny dude that made “Freaks and Geeks” and “3005” is the same dude that made “Redbone”? Yup.

And it didn’t stop there. Glover has been riding high ever since — 5 Grammy nominations, 2 spectacular seasons of Atlanta, a Star Wars movie, endless amounts of praise, and now “This is America.”

Glover’s ability to create thought-provoking art, while keeping it fun is a true gift that the rest of us can only marvel at. Hopefully, Kanye can observe what Glover is doing and draw some inspiration from that.

It’d be nice for all of to see both of these at the top of their games at the same time. 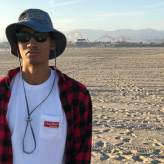 Raf is an SU grad and UES resident who's convinced Migos is the greatest rap group of all time. When he's not doing it for the Kulture, Raf can be found taking bar trivia way too seriously.

Previous ArticleRyan Coogler could bless 'Black Panther' fans with a female spinoff
Next ArticlePrince to drop album with TIDAL in 2019 and we should all be hype AF!
MOST POPPIN’