On July 22, the Instagram account Diet Prada, an account that reports mainly on the fashion industry, posted the screenshots of a direct message sequence between the photographer Marcus Hyde and the model Sunnaya Nash.

Hyde, who has shot for the likes of Kim Kardashian West and Ariana Grande, posted an Instagram story with a photo of a woman showering, writing: “Who wants to shoot?” over her naked torso.

Nash, a long time fan of Hyde’s work, responded to the story. However, Hyde made it clear to Nash that if she didn’t send him nudes he would charge her $2,000 for the shoot.

Understandably outraged, Nash posted screenshots of their interaction on her own Instagram story to expose the predatory behavior. After being re-posted to the Diet Prada account, the story quickly blew up.

Ariana Grande responded to the accusations, writing in an Instagram story:

“Please do not shoot with photographers who make you uncomfortable or make you feel like you need to take your clothing off if you don’t want to.”

“If they tell you you have to pay more money to be clothed that’s f****d and I’m so sorry that’s happened” pic.twitter.com/6wuNdRRlPe

Kim Kardashian West, who donated nearly $25,000 to the photographer’s recovery fund after an accident he had last October, also responded to the accusations on her story, writing:

“My own experiences have always been professional, and I am deeply shocked, saddened and disappointed to learn that other women have had very different experiences.”

Once one takes into account the cultural privilege of Kardashian West as one of the biggest stars of our generation, of course, her own experiences would be professional.

Predators only prey upon those they believe won’t be able to fight back.

Makeup artist Cindy Bowie told Buzzfeed News that Nash was well known in the industry for his predatory behavior towards models.

Art dealer and creative director Walter W. Brady has also become incredibly outspoken in supporting Nash and fellow models who have been targeted by predatory photographers. 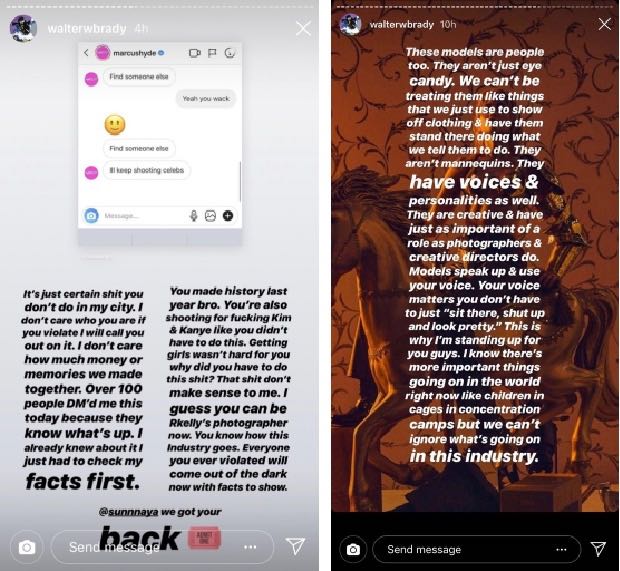 On her Twitter, Nash has been continuously posting screenshots of fellow models who have messaged her with their alleged experiences with Hyde.