Redefining the American dream: ‘The Starfish’ tells a story of perseverance
PHOTO CRED: The Starfish
By Conrad Hoyt May 25, 2020

“One day a man was walking along the beach. He noticed a figure in the distance. Approaching the boy, he asked, ‘What are you doing?’

The youth replied, ‘Throwing starfish back into the ocean.’”

This story is told by Herb Gildin, our film’s focus, and he reads it aloud to a room of loved ones in older, early-2000s footage.

“Don’t you realize there are miles and miles of beach, and hundreds of starfish?” said Herb as the man in the story. ‘You can’t possibly make a difference.’”

The Starfish opens with a delicate, nostalgic piano melody playing over old photographs, the current video of Herb in his warehouse, and footage and narration of Herb telling the story to a room in Sweden in 2001.

Past and present, the visual and visceral understanding of where Herb came from, what shaped his journey, and how he ended up where he did are all present in this doc.

Herb Gildin was a father, he was a grandfather, and he was a survivor of the Holocaust. But his survival and ultimate prosperity could not have been achieved alone. The Starfish, directed, written, and produced by his grandson, Tyler Gildin, is a story of benevolence, altruism, and family, either by blood or by bond.

“It’s a story about perseverance, and I think it can hopefully connect with a larger audience on a human level,” passionately expressed Tyler. 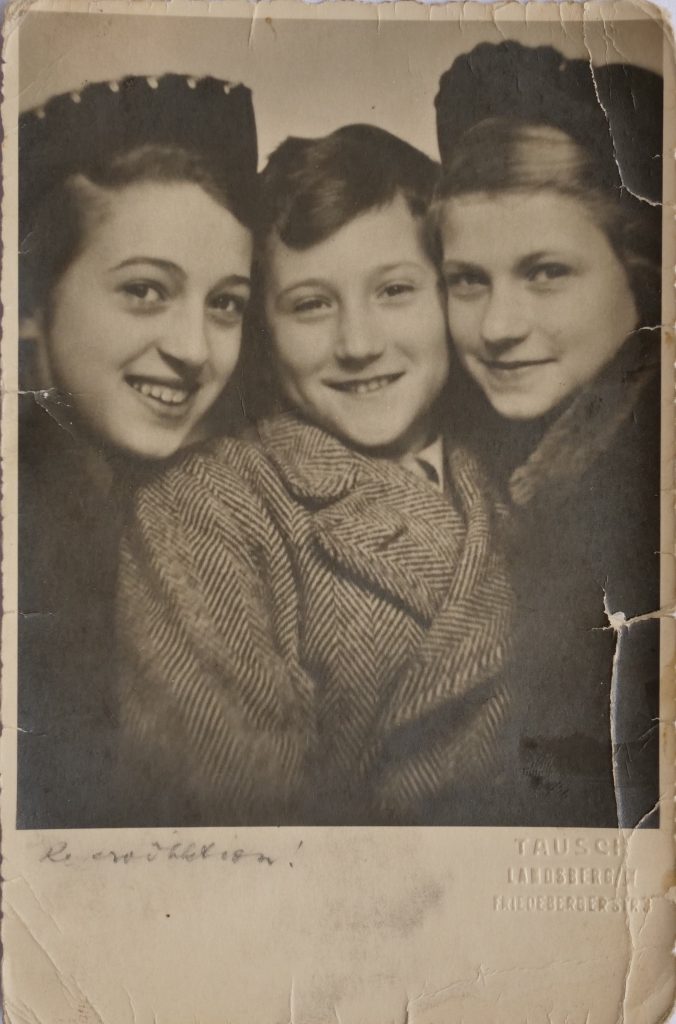 Herb lived a happy early-childhood in Landsberg, Germany, with his parents and two older sisters Cele and Margaret. He expressed how he did not realize being Jewish meant anything to him, or that it defined him at all.

“Everything was very normal until Kristallnacht,” said Herb.

Nazi Germany was largely transformed after the Night of Broken Glass. It was a dark event that left Jewish businesses, families, and temples destroyed and desecrated, and many people killed.

Eventually, through an organization called HIAS, Herb’s parents were able to send their three children to safety in Sweden, albeit in separate homes.

“The sad thing is, there weren’t too many places that were willing to take Jewish children,” Herb bluntly put it. Herb and his two sisters (Cele being the oldest at just 14) made it to Sweden, where they were forced to lead new lives. 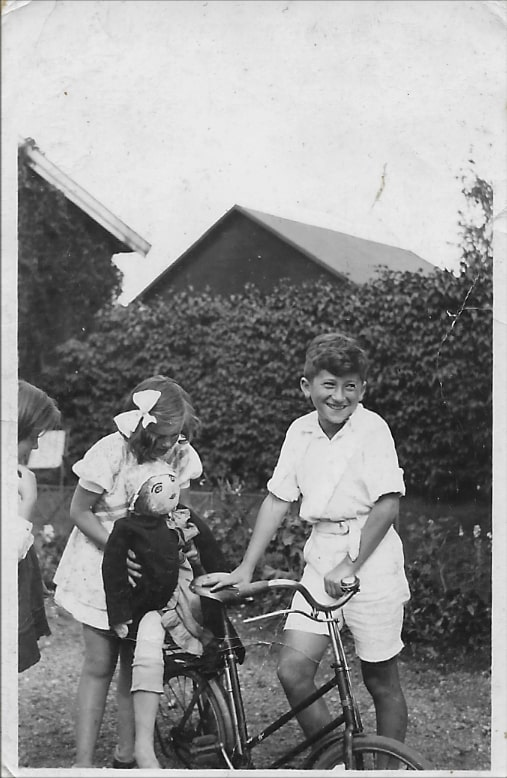 Tyler, and predominantly the rest of his family too, knew some details of Herb’s life. But the finer details of the life and experiences of the patriarch of the Gildin family was missing.

“It wasn’t until my grandfather, at his sister’s funeral in 2017, where he first started to give first-hand accounts of that experience and what that was like. That was really the first time I had heard him open up. And that’s what really inspired me to want to pursue filming with him,” said Tyler.

When I was a junior at Cuse my grandparents came to visit me. It happened to also be Halloween weekend. That year I dressed as Larry David so I decided for some reason to take a picture of my grandfather with my wig on. I’m posting it today, on the one year anniversary of his passing, because it makes me smile. As serious of a man as he was, I always found a way to make him laugh. To everyone who has reached out with some of the most thoughtful messages after watching #TheStarfish, you have no idea how much I appreciate it. Im glad so many more people can see that my grandfather was a pretty, pretty, pretty, pretty special guy.

Cele, Herb’s older sister and surrogate mother for part of his life, passed away three years ago, may she rest in peace. Herb, Margaret, and Cele arrived in the same town, Falun, Sweden, in October 1939, but were to live with three separate non-Jewish families.

Herb, after a brief and rather uncomfortable stay with an older couple, settled with the Silow family, who had children such as Agneta, for Herb to play with.

“They were a great, great family,” Herb said. “It was an interesting life.” 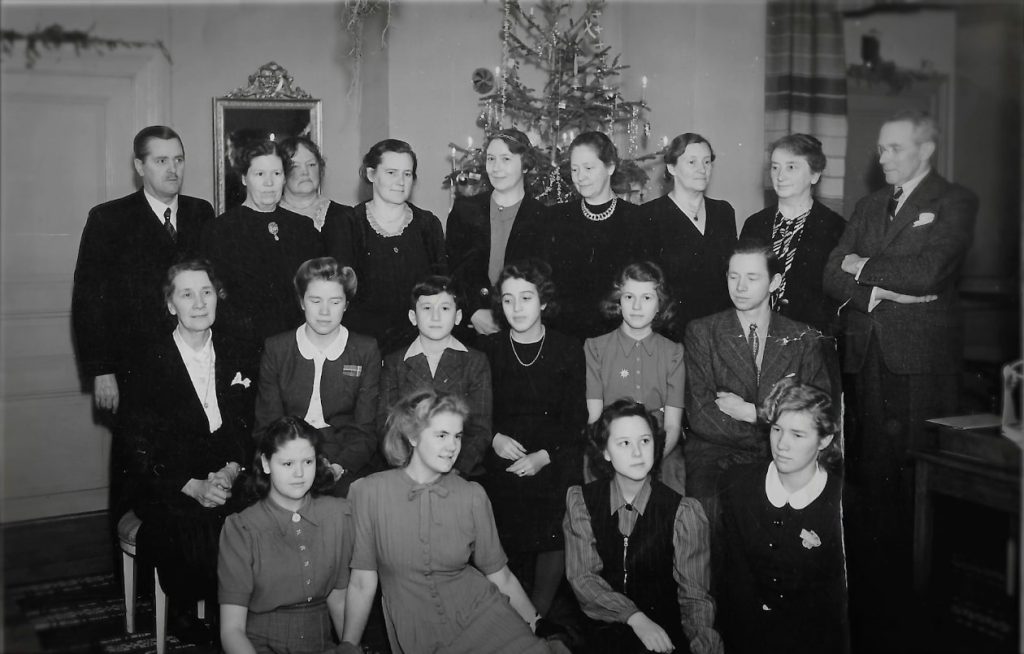 This is where the tale of the boy throwing the starfish into the ocean comes into play. Doing one good deed, throwing that one starfish back into the water; some may say as the man in the story does, ‘It’s just one. What’s the point?’”

Herb, retelling the story as the boy: “Smiling at the man, he said, ‘I made a difference for that one.’”

And such is how the story concludes, as we find out later in the film. The Silow family took Herb in, kept him safe and as happy as one could be without their parents. Herb lived a long and happy life largely because of them.

Today marks the 81 year anniversary of the night of #Kristallnacht. Here’s a clip from #TheStarfish where my grandpa describes what that night was like for him.

Tyler was familiar with the story of ‘The Starfish’ before he even saw the old footage of his grandfather telling the story in Sweden.

“It’s a story my summer camp would tell. It’s a story that has so much in it about giving back and giving an opportunity to people. It’s a nice story that was part of a summer camp tradition for me.  So I had been hearing that story for 12 or 13 years.”

Tyler, ironically at summer camp at the time, finally saw the footage of his grandfather telling the story. He got goosebumps. It was a wild coincidence. Both of them knew the same story and felt a deep connection to it, without ever having spoken it to each other.

Herb explained in the footage, in 2001, how the Silow family was the young boy, and he was the starfish. They made a difference for him, and in his long and prosperous life from then on, he made a difference in countless other individuals’ lives. The old man walking the beach, who could be labeled as pessimistic, was the world as it was.

From the moment he was a boy, Tyler felt a natural interest in filmmaking. “I had my first VHS camera and I would walk around interviewing people or making up little sketches. So, I was always into producing videos.” 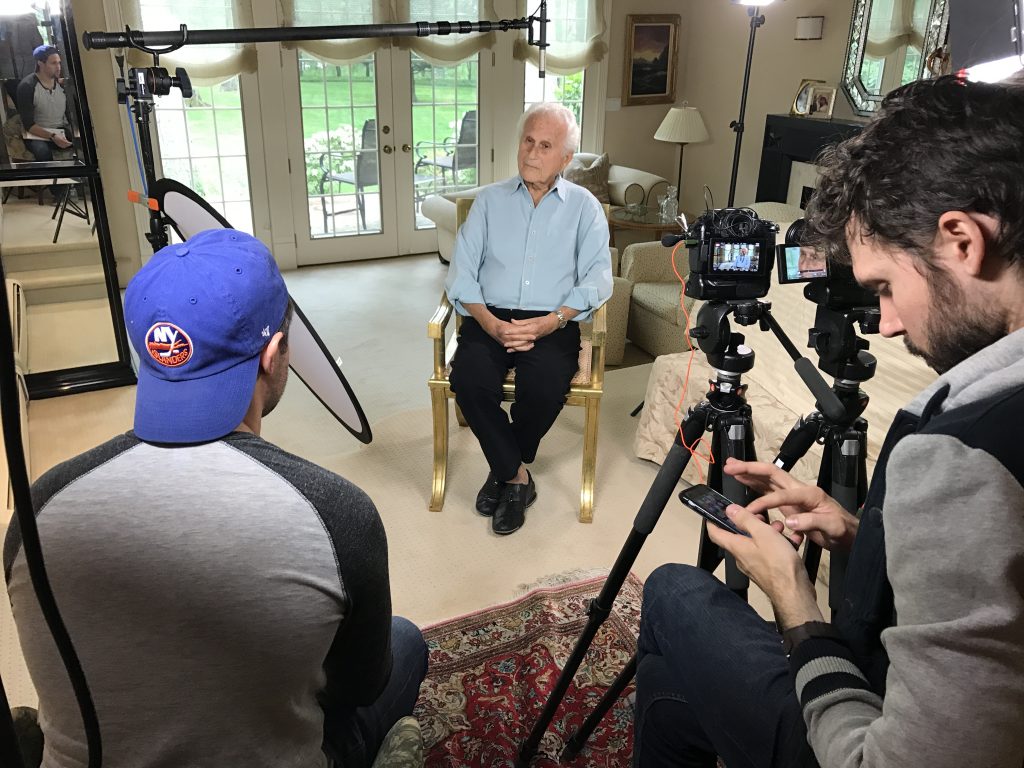 He formed Gildin Media in 2017, around the same time he started working on The Starfish. Gildin Media works on creating content for a portfolio of brands, while also creating personal projects such as this documentary.

“The media landscape is always changing, and I want to be as innovative as possible and come up with different ways to tell stories. So, I don’t know what that next big project is, but I have a few ideas…”

Today would be my grandfather’s 91st birthday. It’s been almost a year since he passed and there hasn’t been a day that I haven’t thought about him, his wisdom and our almost daily phone calls. I took this photo of him when we brought Brody down to Florida so they could meet for the first and only time. For a fairly serious person, this is probably the biggest smile that he’s ever had in a photo. Harlow is named after him and one day will know the great man he was. Ive been fortunate enough to be able to continue to tell his story over this past year and I’m excited to share some exciting news on #TheStarfish very soon. Happy birthday grandpa, we miss you.

Tyler went to the communication school at Syracuse, Newhouse, and was a television and film major. An affinity was always there for content creation, whether that was film or TV, or what ended up ultimately being digital video first.

“A bulk of my experience has been creating video online. So I had always been interested in storytelling, since I was a child.”

The Starfish was a chance for Tyler to work on a personal project, one set aside from his content creation for outside companies. But with the film centered on his grandfather, which would be lovely and captivating for his family, Tyler still had to figure out a way to make it appeal to a larger audience.

If you’re a Long Islander, you grew up reading @newsday. This one is really special. Appreciate the continued support for #TheStarfish. Check out the article, and yes I chose an @ny_islanders hat over my quarantine hair. It’s Long Island’s paper! Link in my bio.

“The big challenge for me was ‘how do I tell this story, in a way, that the average person who doesn’t know my grandfather would find interest in the story?’” explained Tyler.

With that in mind, the editing of the doc took a lot of time. Tyler told me how there were only a handful of shooting days, but the post-production needed to be carefully crafted and conducted. With poignant and intimate anecdotes told, Tyler needed to find a way for visual accompaniment.

“It was using some archival footage, I was very fortunate that my family had so many photos and some 8-millimeter footage that I could use.” 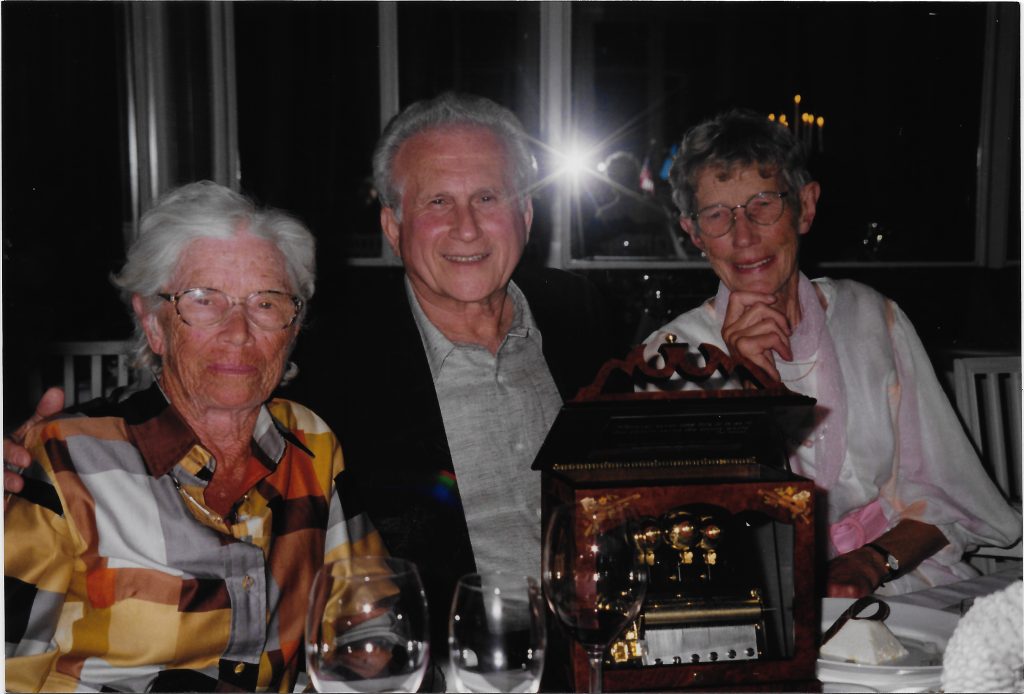 It was also adding in animations, sensitive to the topic, of course, that added a visual experience for the viewer such as a black-and-white silhouette.

The Starfish was a chance for Tyler to tell a personal story that has affected him, and one that contains a larger theme of helping others. More than that, it was a chance for him to explore much of his family history that was otherwise kept in the dark.

Either out of willful preference or sheer necessity, people lose track of their pasts; sometimes for so long that it feels like another lifetime. 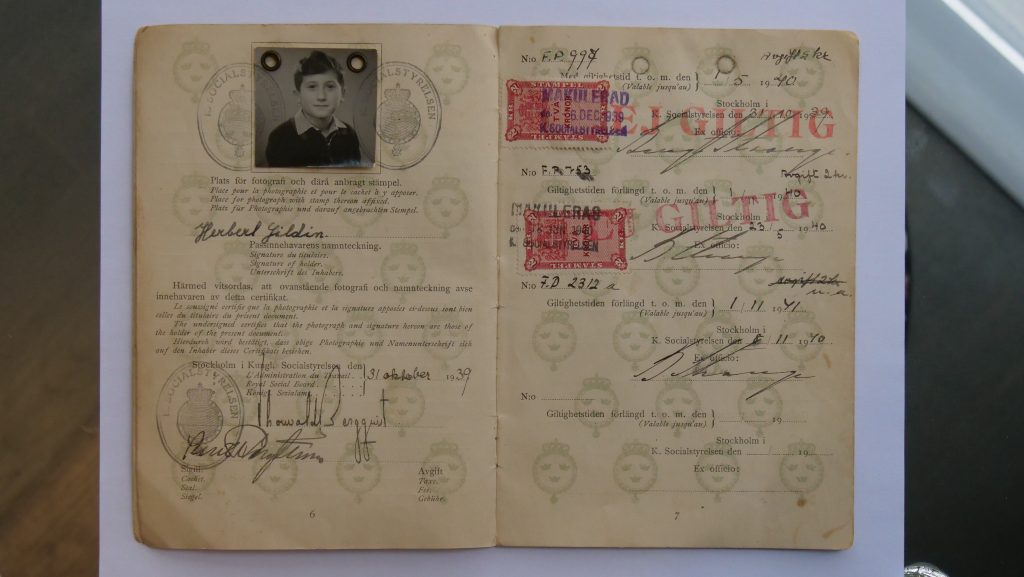 It can be extremely harrowing to reopen old wounds, to revisit long-forgotten past experiences. But Herb told his life story to his grandson, and that story speaks to a generation of people who were children during the Holocaust, to anyone who has fled persecution and been forced to rely on the benevolence of others. To anyone who acts with or has been the benefit of altruism.

“I mean it’s just the idea of generosity and taking a chance on people. And that even if you could just help one person, to that one person, you’re making a world of difference…” passionately explained Tyler. 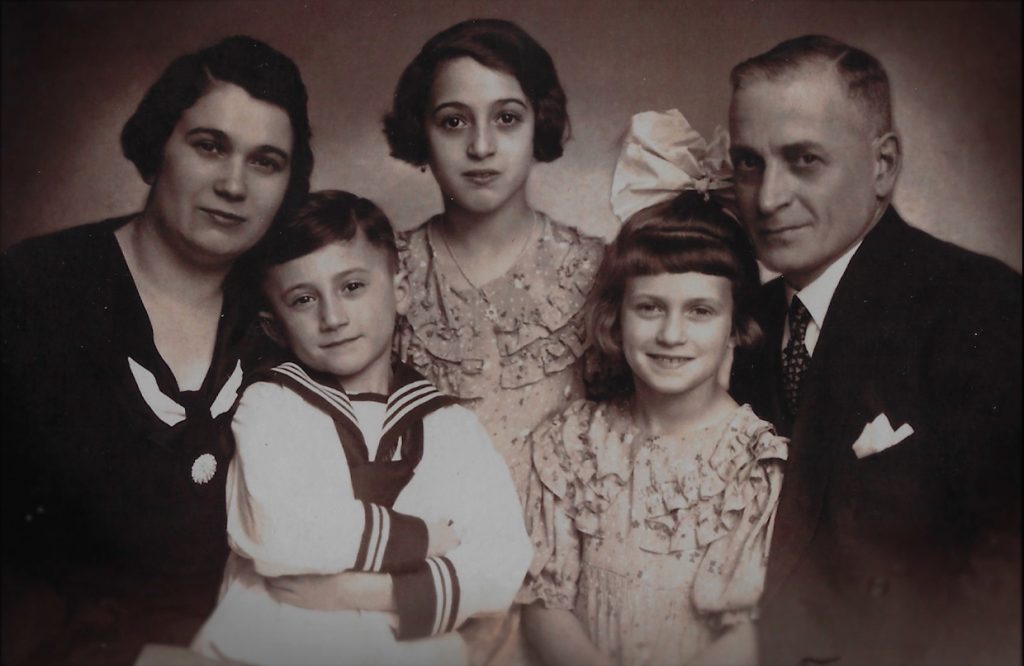 Herb passed away on May 14, 2019, as the last living member of his generation from both his German and Swedish families. The Gildin and Silow families remain in close contact to this day.

Previous ArticleMusic vs. The World: These Verzuz battles will get you BIG mad
Next ArticleProud to Pay: Donate and pre-order your copy of PAGE Magazine
MOST POPPIN’