How paying my dues in NYC kitchens made me the chef I am today
By Chef Harold Villarosa June 24, 2020

One of the best ways to move up the ladder in the restaurant business is by being a stagiaire.

A stagiaire is a trainee, working in an unpaid internship where a cook or chef works briefly, for free, in another chef’s kitchen to learn and be exposed to new techniques and cuisines. It has been like this for decades; it’s one of the fundamental pillars of becoming a chef.

I learned the term and process first from Anthony Bourdain’s book Kitchen Confidential. I figured if I’m gonna be in it to win it I might as well go all in. So I made a list of places I wanted to work at and tried it out.

An award-winning American restaurant on the Upper West Side, a fine-dining vegetarian focused restaurant in Midtown, and an Eastern European food spot in Tribeca; here was where my eyes, big as saucers, were planted. I did the research on the chefs, his or her food philosophy, and what it meant for them to do what they do.

Naturally, I thought it would be easy and I could just say “hi” and they’d let me in.

My thought process and aspirations for my stagiaire experience was that it was going to be this beautiful time where the chef is working one on one with me, teaching me all he/she knows about the industry. Sipping champagne and drinking espressos by the fire.

No one told me what it really was going to be: plucking duck feathers and shucking crates and crates of fucking peas. You ever shucked a fresh pea before? That shit is not right. 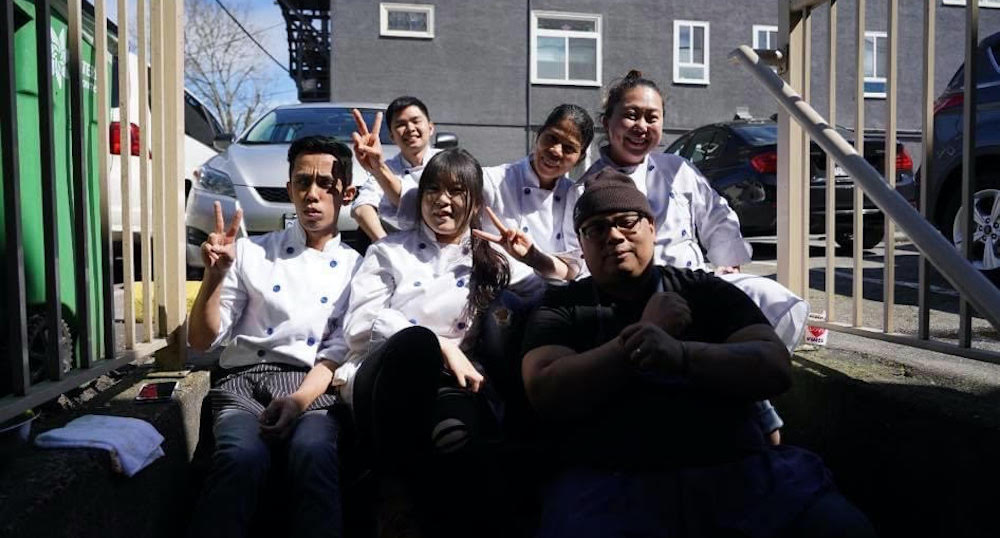 Every single restaurant I went to with my resume of experience from McDonald’s and White Castle was laughed at by every chef/maître d’/general manager/dishwasher I could talk to in these places.

Then one day I got lucky and I sent an email to a restaurant that had a leader who believed in the words hustle and hard work, and he let me in.

Damn, what a beautiful kitchen. Spanning over 1200 square feet, this place housed 35 cooks, four sous chefs, and the chef demanded loyalty. It was a sight to see. I was placed in a section with the rest of the interns, wide-eyed kids from culinary schools whose knives weren’t even sharp yet.

They all seemed out of sorts and tense at the table, picking at herbs for garnish, chopping super fine fried shallots, or brunoise of pickled cornichons (omg).

So I introduced myself to the bunch, “Hi my name is Harold and I’m an alcoholic,” I said as an ice breaker.

Not a single person looked up and to make matters worse I got a stare down from a girl with multiple bandaids on her hand. Fuck me.

These guys are hardcore and probably have gotten their ass kicked a few times. The head chef came by the table and said, “Okay, who knows what’s in Chinese five-spice?” No one answered.

I thought myself, “I have no clue. I don’t even know what’s in sazon.”

“You from $&@ school? You don’t know? You’re paying 100,000 dollars for your education and you don’t know?” he bellowed at three interns wearing their bright green-lettered uniforms. I felt sorry for those guys. $100,000 for a school? Where is he going, fucking Harvard for culinary? Dumbasses. 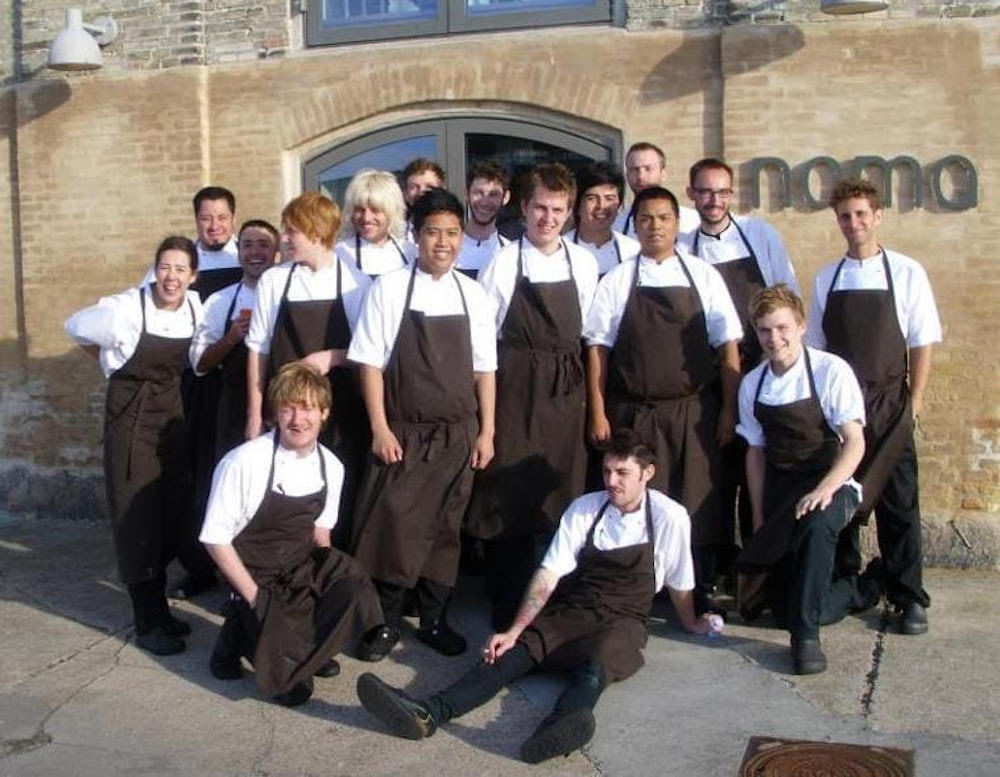 The chef walks away and in seconds I see cookbooks and textbooks pop up from a secret compartment and these animals were looking that shit up. Murmurs of “turmeric?” and “allspice?” “cinnamon, yeah cinnamon.”

I thought ‘oh hell nah, what did I get myself into?’ The chef returns, books rapidly discarded. “So, geniuses what is in the mix?”

Leaving that restaurant that day, my head hurt, and my hand and arms were full of burn marks from sticking them in hot ovens. Not to mention random splatters of duck fat. I was exhausted. But, it was amazing.

Not only did I see techniques and beautiful food plated, but I got to recognize the organization and patterns of training each chef would do.

One thing that they demanded was professionalism and cleanliness. I was hooked, not only to the smells and dangers of the kitchen but to the intensity of a Michelin-starred restaurant.

I vowed to myself that day I was going to work at as many Michelin-starred kitchens as I could and be the first Filipino-American with a Michelin star. Fast forward 10 years later, I worked in a combined 11 stars and I hated my life.

The next place I staged at was a beautiful European restaurant with a hotshot young chef, doing crazy molecular, newer techniques with food. One thing that gave him that leverage was a busy lunch-business crowd, which was also amazing to see.

My lesson learned was use cheap cuts and scraps to make the lunch menu and the expensive products during dinner. It made a perfect holistic approach to food.

One of my duties was to ball-up meatballs for lunch, using an 18-scoop and my bare hands. Grinding the meat from its primal cut to weighing out the spice mix and then rolling the balls and resting them up to be baked. I lived in the production kitchen and having already spent a month with them, I was trusted with making the meatballs, which was the signature dish at the restaurant.

I was on one. I just had two shots of espresso – this was on my list that day and I had to bang it out before service started upstairs.

I was working so efficiently, grinding the meat, making sure it stayed cold and had enough fat. I had to clean up the meat grinder, return pieces back, weigh the spice mix. Boom – mix the meat. Boom – right into meatball production.

Per day, we had to make 1,200 meatballs, as they sell four pieces per order. Business guys love eating meatballs in a fancy restaurant. There’s something about meatballs and having a power lunch meeting, especially in this area near the banks and Grand Central.

How many business deals with their thousand-dollar suits and gold cuff links got done over these luxurious meatballs, and the idea that this is something that they do every day, is mind-boggling.

The sous chef comes downstairs, let’s call him Harry,  he checks on me and taps his watch. This indirectly means I’ve got one hour. I’m a fucking meatball making machine, scoop, plop, mold, scoop, plop. I was on one. This restaurant had a particular elevator in it to go up to the main kitchen, super dope.

I head upstairs and they have a fancy oven called a rational and roll a whole speed rack of meatballs right in the oven. It sears them perfectly for 15 min and I bring the whole thing downstairs.

I was so proud of myself, like out of this world ecstatic. This was a month in the making and I was bodying it. But, what happened next still pains me to this day.

I don’t know why, but I was sure and hard-pressed to put this whole speed rack of fresh/hot meatballs in the walk-in. Knowing it now, putting it in first is a hazard. You need to let it cool down before going into the fridge. It will lower the temp of the fridge and that’s a violation.

But without thinking I was determined to put it in the walk-in. Mind you there’s a 3-4 inch lip to step up into this walk in and I was tilting this speed rack full of meatballs into the fridge.

Stop. Pull it back and look at it from the third person point of view. Tilted speed rack with trays full of meatballs and a 5’9” nothing trying to push it up into the walk-in. Fast-forward a few seconds, disaster happens.

All of the top five trays spillover, meat juice, and meatballs come showering down on me. My hard work, sweat, and tears spilled all over me like blood in that movie Carrie. It was so heavy and I got overwhelmed. I just let it go and all of the 1,200 meatballs fall to the ground and all over me.

I fall to my knees surrounded by meatballs, grasping the few I can catch and just crying my eyes out. It looked like a massacre and I was the murderer. It probably looked so bad because one of the front of the house people came and said, “fuck,” and hurried upstairs to get a chef.

While I was there surrounded by meatballs and meat juice, I felt two hands grab me under my armpits and lift me up. It was chef Harry, he had a huge grin on his face and gave me a big hug.

“Sometimes in life, shit happens. What you have to remember is the next steps, what are you gonna do when life knocks you down? You gotta get up man,” he tells me.

He proceeded to clean up everything, and throw it in the garbage. I tried to help but he just shushed me away and told me to change and get ready for service.

I cringe while writing this and thinking about it right now. I didn’t know better back then, and still, I’m trying to process life a bit differently. One thing I know for sure: the restaurant industry has given me the strength and the mental toughness to work through a problem. 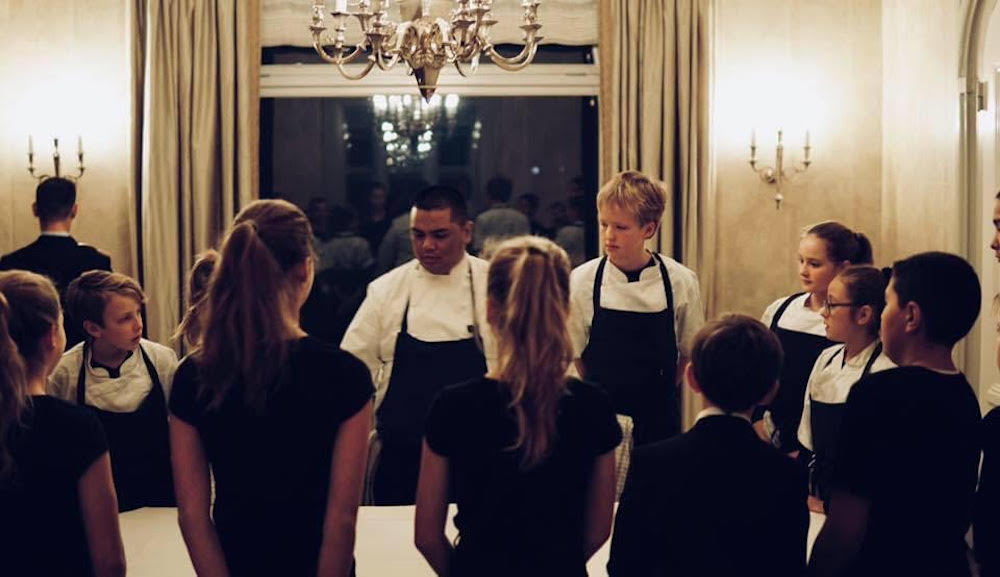 It has always been a parallel to life. Working in the industry gave me a lot but it also took a lot. I’m glad I had the chance to live it, to be part of it, and put in the work to get where I am today.

Hard work is a requirement, never forget that.

Previous ArticleWhen it comes to cannabis hardware, Cloudious9's founder is a pioneer
Next ArticleTurn the page on fashion and help fund these publications on Indiegogo
MOST POPPIN’