With consumers becoming more conscious in their pursuits of purchasing products from companies that make conscious beneficial decisions toward social, political, and environmental issues, comes a wave of young entrepreneurs looking to combine their love for the arts, and their concern for the world.

Nadir Jackson, who is based out of South Orange, New Jersey, is one of the brilliant minds who identified an issue in the fashion industry and chose to target it through his craft. Amongst other issues, material and textile waste are a huge threat to the environment.

Nadir saw this issue and to promote a waste-less fashion industry, he combined his new found passion for creating jackets with his love for maintaining an ecological balance. His adoration for travel and embarking new cultures has pushed the theme of sustainability within his brand.

I had the chance to speak with Nadir who explained how he fell into the fashion industry amongst his many talents, how traveling has groomed his designing, and his desire to promote sustainability in the cut-throat industry.

Queens-native and Jersey groomed, Nadir mostly focused on sports and music during his high school years. His love for music landed him many jobs producing whole albums for close friends and local artists.

In the midst of completing a few projects, a friend mentioned an opportunity during Paris Fashion Week. Nadir’s eyes lit up like Charlie’s when he got his golden ticket. Without any formal training or even prior attempts, Nadir began plotting on a collection under his own brand. He said,

“I love rolling the dice and taking risks, so I was like ‘yeah, f*ck it. I’ll drop a line, I’ll drop a collection.”

He started off hand stitching his jacket designs and took control of his creativity. After his friend donated a sewing machine to him, he was able to accelerate his production line in time to have his very first collection ready for Paris Fashion Week.

Thank You to everyone who came out to the @foreignexchange.co pop up for Paris fashion week last Saturday. Thank you to all the international designers. Thank you to In-Dialog for displaying their groundbreaking technology. This was an amazing experience. Can’t wait to create the next steps. 🤞🏿🖤🤞🏿

Traveling between Paris, Spain, and other European countries, Nadir has accumulated quite a few stamps in his passport.

His wanderlust has become a driving influence in his clothing brand. The name of the brand — Foreign Exchange Global — alone, embodies the theme of internationality and travel.

Many of his most notable jackets are named after locations he has visited, like the Matador jacket, based on the famous running of the bulls in Spain, and the spectacular sights of tulip gardens in France are embodied in the Les Tuileries jacket.

My Unisex Custom Denim Jackets for @foreignexchange.co These Jackets Will drop in Paris June 23rd at the Pop Up American Release To Be Announced. Thank You To all the models! Photographer : @wadekilledjohann Edits : @horton94_ Casting Director/ Assistant Director: @catdaddylenny Special Thanks To Edwin & Sebastian 🤞🏿🤞🏿🤞🏿

His acquired traveler’s miles don’t serve as the lone influence within the brand; Nadir is a common advocate for sustainability.

Textile waste is a growing issue as fast fashion becomes more prominent. Nadir identifies that textile waste — amongst other wastes produced by the multi-billion dollar fashion industry — calls for an ill-fitted environment.

As a twenty-something-year-old growing up in Trump’s America and a chaotic world, Foreign Exchange Global feels that its duty is to promote sustainability through their clothing.

His distinct design style manifests his claim that innovation plays a huge part in not only his design but his life. In talking about how his designs came to light, Jackson said,

“Innovation is really key for me, too. No matter what I’m doing, anything I put out- innovation is definitely a key component.”

The decision to design clothing, aside from a huge environmental crisis standpoint, also derives from Nadir’s disdain for the current fashion industry’s use of denim. Nadir said,

“I felt like nobody was doing it right. I was really underwhelmed and unimpressed by a lot of designer denim, so I figured ‘let me play with it, let me experiment.”

Paris Pop-Up Recap. Thank you to everybody who showed love. This wouldn’t be possible without you. The collection release is ON THE WAY!! 📽: @celia.blum x @horton94_ Thanks: @sliceparis 🎼: Unreleased music from @givemosesgive 🗡🗡🗡

His unique and unconventional designs have left an everlasting impression on his peers and [flee] clients alike.

Through this young creative’s fusion of visions of design and sustainability, we gain a unique and stylistic melange of reused textiles and a loophole within the environmental crisis that the fashion industry participates in. 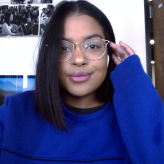 Newark native Nelsy Baro is a young, public relations representative for clothing and lifestyle brand Brownmill Company. Through her works with the company, being the executive director at Scarlet Magazine, and running her own lifestyle blog “Coffee With Nels”, she is able to express her opinions on all topics ranging from up and coming local entrepreneurs, to the very common and prevalent mental health issues that she and many people struggle with for most of their lives. She uses her passion for art, writing, helping others, and unique conflations of her different passions to ensure her peers are aware of the embracing community that she cultivates.