De’Andre Arnold, the high school student who was ordered to cut his natural hair or face not walking at graduation, is moving the topic of hair discrimination forward with his poise and driven disposition amidst adversity.

Arnold is a senior at Barber Hill High School in Mont Belvieu, Texas, a town just outside of Houston. His circumstance of being discriminated against is dispiriting, and it is not an irregularity for people of color, specifically black people, in this country.

How can we forget the case of 6-year-old C.J. Stanley in 2018, who was barred from entering his kindergarten classroom because of his dreadlocks? What about high school wrestler Andrew Johnson who was forced to have his dreadlocks cut or else forfeit his match?

The issue principally comes down to people of color who are denied access, opportunities, and privileges that white people are afforded, for the simple reason that they are wearing their hairstyle naturally.

In some cases, it stretches beyond opportunity, when people like Arnold and Johnson are forced to sacrifice integral parts of their identity for arbitrary “rules.” These instances of exclusion and discrimination are gross injustices and inherently racist.

The NAACP Legal Defense and Educational Fund (LDF) represents De’Andre Arnold and his family. The LDF has pushed forward their efforts to sign into legislation the CROWN Act, a law that “ensures protection against discrimination based on hairstyles.”

We had the immense pleasure of speaking with LDF attorney Patricia Okonta about the CROWN Act, her work representing the Arnold family, and discrimination people of color face in this country.

The CROWN Act stands for “Creating a Respectful and Open World for Natural Hair,” and is the first legislation passed at the state level prohibiting hair discrimination.

California first passed the CROWN Act in January 2019, and the law went into effect on Jan. 1, 2020. New York followed suit, introducing the law in July 2019, followed by New Jersey in December. Now, 22 additional states are considering the CROWN Act or introducing their own anti-hair discrimination bills.

“CROWN Act measures generally prohibit discrimination against hairstyles commonly worn by black people, and so that would be both natural hair and protective hairstyles,” said Okonta.

Did you guys hear our #HairLove shout out at the 51st annual @naacpimageaward’s last night hosted by @anthonyanderson?

After watching make sure to go to https://t.co/WxDrZeCsMv and sign and share the petition so we can help end hair discrimination in all 50 states. pic.twitter.com/nKhIFqwb1M

In their acceptance speech, Cherry and Toliver made sure to reference the CROWN Act.

Additionally, they mentioned how important it is for people of color, especially children, to love themselves and their natural hair unabashedly.

Hair Love’s message is intrinsically related to the CROWN Act, and the short film did a magnificent job of promoting awareness for this issue and highlighting the love between black families.

De’Andre was Cherry and Toliver’s special guest at the Oscars. 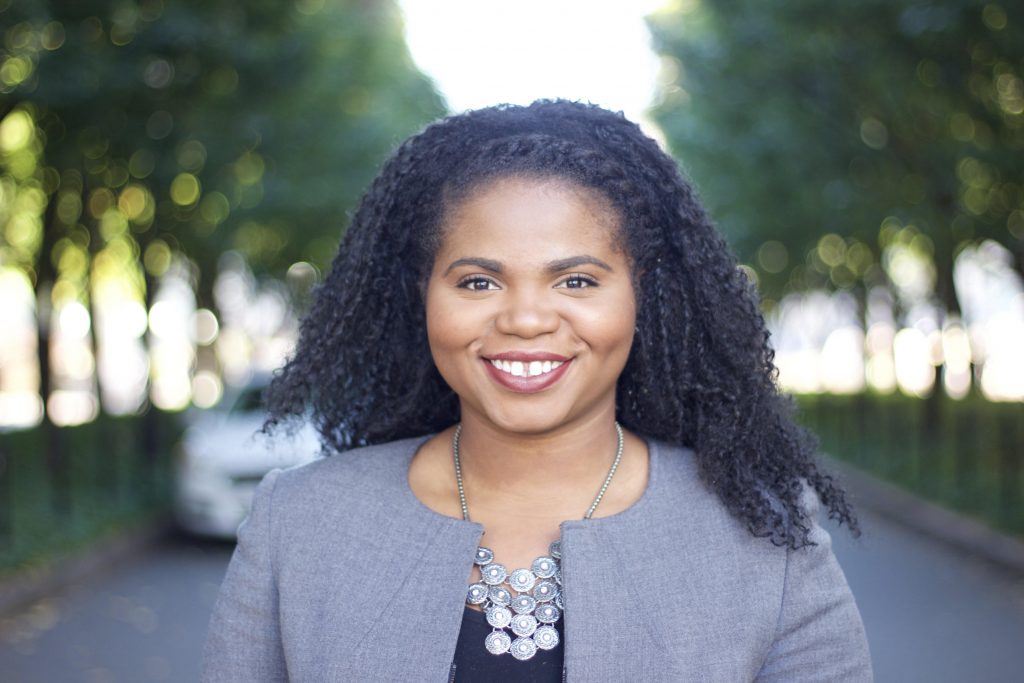 Okonta interned with the LDF during law school because she wanted to do civil rights work, particularly focused through a racial justice lens. “I started working at the NAACP LDF immediately after law school,” said Okonta.

The history of the soon-to-be-80-year-old organization captured Okonta’s admiration and interest right away. The LDF was created under the vision of Thurgood Marshall, who later became the first black Supreme Court Justice.

“I already knew that they had this really prestigious and tremendous record. Being in their office and seeing the work that they do, how really vigorously they advocate for their clients and are really about pushing this needle of justice forward, I did everything I could to work towards getting here after law school,” she said.

Okonta received a fellowship to start her law career at the LDF.

The LDF learned of Arnold’s situation at the end of January, after a school board meeting where the issue was brought up and plenty of activists attended. The story then gained national attention.

“We took particular interest in this case because it is particularly harsh to disrupt a child’s educational opportunities, simply because he’s choosing to wear his hair naturally,” said Okonta.

“So we thought his targeting was really reprehensible and we sought out ways in which we could help and assist,” she continued.

Okonta spoke beamingly of Arnold and his parents, a family in a situation of increased media attention and sometimes, scrutiny. Neither Arnold nor his parents wanted this situation.

Yet they understand that, now, their efforts and resolve can have a far broader impact than just on their own lives.

“It has been tremendous to get to know De’Andre and his family. I can say from personal experience and personal interaction, De’Andre is just so poised and intelligent and thoughtful and caring,” passionately expressed Okonta.

“He really understands that this issue is not only terrible and harmful to himself, but has an impact on other children that look like him and other students.”

Okonta continued, “so his ability to really stand up and push back against unfair policies has truly been inspirational. He has held himself to such an incredible standard despite all of this public attention, some of it is not always positive. He has held his head up, and he has really pushed this movement forward in a way that I think is incredible.”

Okonta was adamant about how strong and poised De’Andre’s parents have also been during this process. “I’m so grateful to have the opportunity to work with them.”

“I think hair is important to everyone, particularly black hair,” said Okonta.

What comes to mind when you think of #NaturalHair? 👑

Okonta further explained that for so long, the people of color’s hair has been unnecessarily controlled.

Especially black people were forced to assimilate to the standards of “professionalism” or what is popular at the time. “Often these standards really have an undercurrent of white supremacy and assimilating to white culture.”

“Black people embracing their natural hair, and really leaning into protective hairstyles, is something that is not only really intimately linked to the black identity but is the showing of power,” said Okonta.

Okonta explained that ideas and bills involved with hair discrimination were pursued a while.

She expressed that outside of legislation, LDF has worked with students and individuals to fight for their right to wear their natural hair.

“But this legislation is just an indication that the public is now more aware and more accepting of this notion that everyone, regardless of their hair texture, should be given the equal access to opportunities,” voiced Okonta.

How Can One Protect Themselves?

“I think the most important thing is that individuals should look at the laws that affect their jurisdiction,” said Okonta.

Representation matters! We can’t quantify the impact that seeing people who look like you in traditionally inaccessible spaces has. 👑 The #BlackHairStory campaign is here to amplify the fact that your natural hair should never close the door to career or educational opportunity. And the #CROWNAct can ensure that it never will.

Okonta made clear that so many different places have different laws, so the best thing an individual can do is to inform themselves on their rights and what kinds of protections exist where they live.

“I think it’s really important to share stories. The Arnold family shared their story about  the harm of this policy and how it impacted them and how it made them feel, and so sharing information with others can always be helpful.”

As hard as it is to share troubling and personal stories, organizations like the LDF are equipped and motivated to help.

Okonta explained that despite state-level solutions, “these racist stereotypes about natural hair still exist and persist through all areas of our country.”

Everyday we are dealt with the fact of knowing oneself. One thing to know is that as long as we work on ourselves daily then we will know the true meaning of self worth Art & Creative direction by @stevenonoja Hair by @hairbysusy #hairbysusy Model @mominatu & @stevenonoja

Advocating for state-level laws is a good first step, but advocating for federal legislation to create a respectful and open workplace for natural hair is the larger goal.

The initiative serves as “an important bill that LDF supports, and it has the potential to prohibit natural hair discrimination on a federal level, which would impact a lot of people at once… and ensure long term protection.”

“[LDF] was founded in 1940 by Thurgood Marshall… and we are almost to our 80th anniversary, and since then, our mission, our goal, really has been to promote full and equal citizenship for Black Americans,” said Okonta.

The NAACP Legal Defense and Educational Fund (LDF) is the nation’s first civil and human rights law organization. Since 1957, the LDF has been a separate organization from the NAACP.

“Our mission, whether it’s through natural hair discrimination work, criminal justice reform work, through economic justice or educational equality work, is to ensure that black people can enjoy the same rights and liberties of citizenship as their white counterparts.”