Artists only made 12% of the $43 billion the music industry produced in 2017
PHOTO CRED: ShotByMF
By Joshua Eferighe August 9, 2018

Recording artists received only 12% of the $43 billion generated in the music industry last year according to a Citigroup report published on Monday, led by analyst Jason B. Bazinet.

The $43 billion spent matches a 12-year peak that the industry hasn’t hit since 2006, the report said. However, despite newfound consumer trust, artists are breaking away with fractions of what they attract.

Labels, publishers, marketing, etc. took almost $10 billion while artists received just $5.1 billion, of which the “bulk” was from touring. And while artists are taking away 12% today as opposed to the 7% they pocketed in 2000, it shows a disparity that’s far too glaring to ignore. 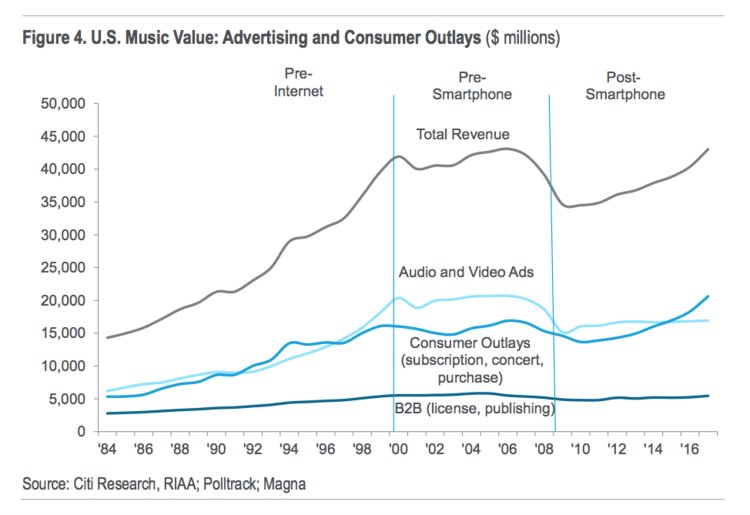 The report projects “organic forms of vertical integration” in the industry, where music providers like Spotify and Apple Music could “organically morph into music labels,” allowing artists to capture more of their music’s value by releasing their work directly with the services.

If anything, the report gives artist bargaining points for when meeting with major labels and shows an area of opportunity for the industry as a whole.

The group who compiled the report together also included commentary from Bjorn Niclas, co-founder of Choon, a cryptocurrency-based music streaming service, who added:

“Currently artists are at the end of the line. They get the smallest piece of the pie even though they are the ones creating the content. In any other industry, you typically see much better returns and margins.”

There are many who will say “there are too many artists” or “everyone wants to be a rapper” and that hip-hop is oversaturated, but the amount of money that artists are barely scratching the surface of what they can possibly make.

There is a need for a new model, and until more rappers like Tech N9ne and Chance The Rapper continues to push the boundaries of what the industry looks like, the labels will keep walking away with most of the pie.