Messi’s decision to leave Barcelona exposes the dark side of soccer
By Bernarda Chiriboga September 15, 2020

Only a few weeks ago, it was announced that Messi was leaving Barcelona for good. After a few days of panic for all Barca fans, Messi released a statement clearing things up; the soccer star won’t be leaving his team (for a while).

What really happened speaks more about the soccer industry than of the player himself. And perhaps it is the clearest example of soccer’s most guarded secret.

For years now, Lionel Messi has been vocal about his desire to leave Barcelona. But on August 25th the soccer star informed the team with a burofax message that he intends to leave the club in immediate effect.

Contrary to popular belief, this had nothing to do with the humiliating defeat against Bayern Munich during the Champion League’s quarterfinals (although it may have been one of the straws that broke the camel’s back).

It all started earlier this year when the club sacked its former coach Ernesto Valverde.  Back then Eric Abidal, sporting director, and former teammate accused the team of collusion against Valverde.

Messi, who has been very outspoken about his strained relationship with Bartomeu and Barcelona’s hierarchy, responded furiously on Instagram to such allegations.

In June, the club decided to part ways with Luis Suarez a year before his contract with Barcelona even expired. Close links to the club have said that Koeman, the team’s coach, phoned Suarez to informed him about his dismissal – something that made Messi even more disappointed with the club.

Ever since the retirement of the club’s previous generation of soccer stars — Xavi, Iniesta, Puyol –, Barcelona has struggled to maintain their profile as one of Europe’s best teams. And the seeming scattergun approach to planning and recruitment plus the lack of progress has resulted not only in angry fans but irritated team members.

Thus, after almost two decades, Messi felt it was the right moment to leave.

“I always wanted to grow the club’s impact and history. It’s been long since the last time we saw a project going on. All they do is and plug holes when all I want to do is compete. Something the club hasn’t done in the last few years,” said the legend.

Trapped in the club

But Messi is going nowhere.

He intended to activate a clause in his contract that should have allowed him to leave the club at any time for free. But the directory had cards up their sleeve; they said that the clause was only valid before June 10th, which is when they were still competing in the league.

If Messi is to leave @FCBarcelona by activating a release clause, then I hope the club try to help, not hinder him. He’s been fiercely loyal and their greatest ever player. It would be terribly sad if it finished with a fight between the player and the club.

The only way out for the soccer star is either to pay the 700 million euro clause or go to courts. “I would never go to courts against the club that I love and the club that made me what I am today,” assured Messi. Making it clear that the issues he has with management have nothing to do with his love and passion for the club.

“I have given it all for Barcelona and I would never go against it. The club is my life.”

His, however, has been a premeditated decision that has been talked about with the club’s president more than once. Messi’s desire to leave Barça does not come unprecedented. Nor is it the first time that the star tried to set himself free and focus on his personal growth. Apparently, being the best soccer player in the club, if not the world, comes with burdens of its own.

Is Messi sentenced to life imprisonment in a place that is not longer making him happy?

Messi was only 12-years-old when destiny wrote his name in Camp Nou’s walls. Carles Rexach was a Barcelona executive when he discovered Messi playing at some soccer tryouts in Argentina. So caught up with Leo’s talent, Rexach made a 12-year-old Messi sign a contract on a paper napkin.

“I decided to sign him on a paper napkin that a waiter gave me because I couldn’t let him get away,” Rexach told Business Insider. 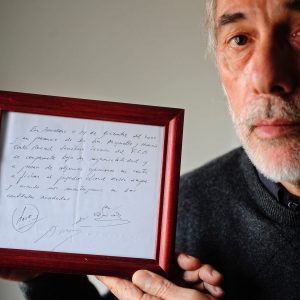 After several talks, the club granted Messi the opportunity to train at soccer powerhouse FC Barcelona’s youth academy, La Masia. They had also offered him to pay for his medical bills; being of short height his family had been following a hormonal treatment they no longer could afford. Thus, the family moved from Argentina to Spain when Messi was only 13-years-old.

By the age of 16, Messi was already making headlines for Barcelona. He was the youngest player to ever score a goal for the franchise. Meanwhile, he was also leading Argentina to the title in the under-20 World Cup.

In 2009 he steered Barcelona to a wealth of success. For the first time, the team had won the Champions League, La Liga, and Spanish Super Cup titles. And Messi himself took home his first FIFA “World Player of the Year” honor/Ballon d’Or award.

By 2012 he had become Barcelona’s all-time leading scorer, surpassing Cesar Rodriguez’s club-record of 232 goals. And in January 2013 he broke another record when he was named the FIFA Ballon d’Or winner for the fourth time.

You get the idea. pic.twitter.com/lXqxwuqMqf

Needless to say, Messi’s loyalty to FC Barcelona has been proven over the years; but Barcelona’s loyalty to him hasn’t. Ever since 2011, when the team’s legendary line-up of Iniesta, Puyol, and Xavi retired, all the blame and burden has been handed over to the 5’ 7 Messi.

Why else would he be having all the support from his previous teammates?

Like him, many others have been caught in the trap of FIFA’s image, incubated since youth academies, bound to play for a team under their agreements. Many, if not most, of the players come from complicated economic backgrounds. They learn from the schooling that their youth academies offer.

Shouldn’t this count as child labor? Clubs literally “own” the players. They trade them and they use them to then manipulate them.

Have you ever wondered what happened with Kaka?

For years, FIFA’s reality has been covered by million-dollar contracts.

But now, as one of the best players faces the frustrating situation of possible career stagnation, the reality is uncovered: for years FIFA’s clubs have been depriving players (young and old) of their freedom for their own financial benefit.