Do memes really make you happy or low key depressed? An investigation
By Julia Sarantis October 23, 2018

As a recent college graduate, I can easily recall the days leading up to and during the final exam period when my Facebook feed would transform into a ceaseless stream of memes.

Whether people went on Facebook during their self-awarded study breaks or to simply procrastinate, my student peers (myself included), would tag each other in posts that depicted the struggle of being a sleep-deprived, over-whelmed, over-stressed, and over-caffeinated student.

It was a way to communicate that we were all in the same boat — scrambling to write up six essays, a lab report and study for three exams in the timeline of five days — a set of circumstances that caused each of us to momentarily weigh up the pros and cons of dropping out of school, and prompted a level of uncertainty over whether we could make it through the week without having a mental breakdown.

If reading this was at all relatable, this exaggerated rhetoric is emblematic of a larger phenomenon on social media; the meme.

Memes are a kind of digital canvas that (re)use images and videos to parody and satirize feelings and attitudes that characterize every day, and/or arise in certain situations.

I know that description is vague. But the array of topics that memes cover ultimately accounts for my generalized definition, while also their continual presence online.

I mean, there are meme pages dedicated to focusing on existential angst and nihilism. 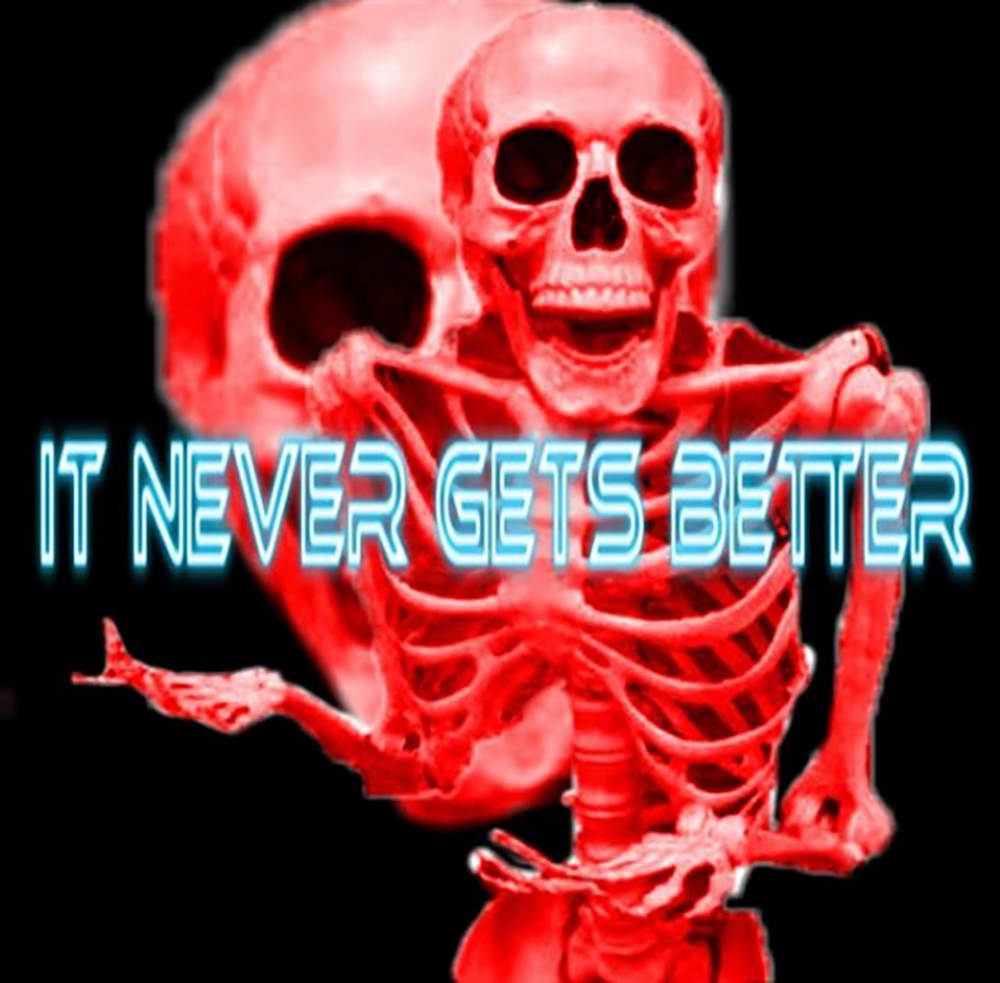 There are memes with content orientated around the perils and absurdity that come with working in retail and hospitality, and the inevitable encounters with members of the public.

There are memes that explore the weekly internal standoff between your knowledge of how much is your bank account and the invitation of going out for drinks, dinner or clubbing with your friends on the weekend. 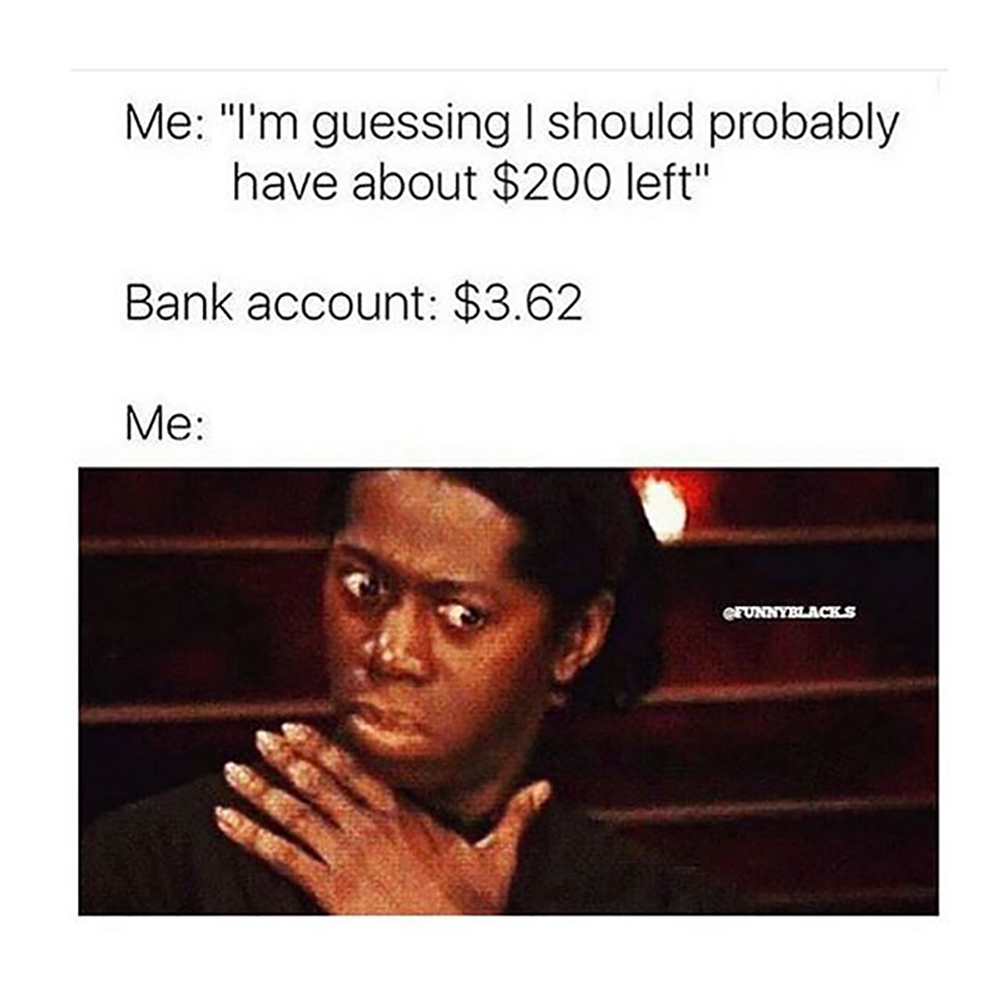 Memes also have their own life cycles. There is even a classification for memes that are considered ‘dead’ or are so overused that they are now empty of any comedic value.

Nonetheless, the fact of the matter is, memes remain visible on every major social media platform and Millennials and Generation Z are still constantly laughing at, and sharing memes.

But, why? Well, memes are highly accessible, intelligible and shareable.

Interestingly, the term ‘meme’ comes from the Greek word ‘mimeme’, meaning “something which is imitated.” The term was later employed in the world of academia by renowned evolutionary biologist and scholar, Richard Dawkins in his book, The Selfish Gene, that was published in 1976.

Dawkin’s coined the term, ‘meme’ as part of his intellectual project of investigating the cultural transmission of human ideas and behaviors as comparable, from an evolutionary standpoint, to the transmission of genes. In other words, Dawkins was evaluating and speculating why some ideas and behaviors survive and others don’t, in the same way, some genes survive and others don’t.

Yet, no one could anticipate that his use of the term ‘meme’ would manifest into the phenomenon it is now.

His comparison, however, is notable given that the way we classify something trending online is by describing it as going “viral.” And when you think about it, a meme only becomes a meme once it is so widespread and is continually shared. I mean, if the image doesn’t spread like some sort of online contagion, it would simply be a funny image you created on Memegenerator.com and share between a network of friends and followers.

It’s funny how we employ scientific language when discussing things that are embedded in culture, human relations, and behaviors, simply because it is mediated and delivered via communicative technologies.

Yet, despite the interconnectedness that the internet provides, our experiences online are fundamentally spatial and relational.

I have heard a saying thrown around recently that “technology has allowed us to be more connected than ever, yet we have never felt more alone”?

That is one of the many fascinating things that have come with evaluating meme culture, as memes, like most things related to technology, have its benefits and its costs.

On the one hand, memes use humor and irony to connect online users and friends to each other. Memes often use self-deprecating humor in which we make fun of ourselves and/or the situations we find ourselves in.

By sharing content that is highly relatable, people feel that they are not alone in whatever they are experiencing.

At the same time, memes that connect people to one another often address and tap into feelings of anxiety, our insecurities, low-self esteem and are topics that are not simply popular, but rather when considered more thoughtfully, are issues that are troublingly characteristic of younger generations.

In fact, a survey published by the American Psychiatry Association found that millennials are the most anxious generation in comparison history. Women reported higher in suffering from anxiety disorders than men, and people of color scored 11 points higher on the anxiety scale than Caucasians. 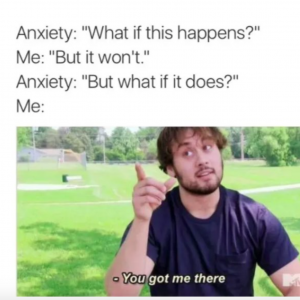 Though its deliver is often exaggerated and often taps into the absurd, memes are highly consumable because they probe into shared feelings that crucially, are underlying.

In other words, memes reveal something about ourselves we do not want to express openly and vocally in conversation.

At the same time, because of the very fact this online interaction is delivered from a distance, it inadvertently fosters a dialogue on mental health and sense of community between people.

Plus, as the advent of social media has developed a culture in which we seek to perfectly curate our lives and present a version of ourselves and our lives through filters, memes serve as a radical counter to this superficial way of engaging online.

Instead, via irony, satire, and exaggeration, some memes elevate and advocate for a level of authenticity by highlighting the common and not so glamorous characteristics that make up our common humanity.

Memes have also contributed to the formulation of social identities and communities on social media. In recent times, memes have been a source of comfort and a way to foster community and solidarity amongst marginalized groups, which has become particularly visible with life under the current administration. 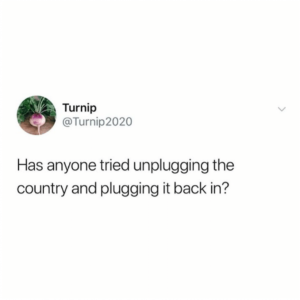 So, what do we take away from this?

Memes are a vehicle to understand ourselves and to relate to others.

Yet, like most things to do with technology and social media, memes come with their own pros and cons and are ultimately a part of the endless discussion on the implications that come with our engagements with technology.

In short, keep scrolling through your Facebook and IG feeds to have a laugh at the memes that are sure to pop up on your devices.

But remember to have those important conversations your friend’s (and your own) well-being in person, because not every interaction and conversation has to happen online.