A figure stands heavy on a floor patterned with swirling lava. Behind him floats a white, unclear formation of soft pillowy textures.

As the camera zooms in on his face, specks of burning ember circle up around him. Shots later, a blue and red title screen; ‘Taemin – Criminal – Never Gonna Dance Again, Act 1.’

A week ago, on September 7, South Korean idol Lee Taemin, simply known as Taemin, released his fourth solo album. Titled ‘Never Gonna Dance Again, Act 1’, it is the first of a two-part musical narrative. The release date for Act 2 hasn’t been announced just yet.

Taemin, who has been in the K-pop industry for over ten years, debuted at age 15 as the youngest member of the group SHINee. In an interview with W Korea, Taemin said,

“I’ve been a singer for almost half my life. I’ve been on this road for a long time.”

While he is now a highly respected solo artist, Taemin wasn’t always a well-rounded performer. At his debut, he was perceived as a dancer and given few possibilities to sing.

His vocals weren’t featured on SHINee’s debut track ‘Replay’. When he was given solo lines, other SHINee members would sing with him to support his voice.

“I thought I had to work much harder to improve,” Taemin says in a video by Sellev.

“I sacrificed my sleep to practice more at the studio.”

He had daily nosebleeds because of this sleep deprivation. Now, 12 years later and just having released his fourth solo album Never Gonna Dance Again, Act 1, the hard work has certainly paid off.

Opposite to what the album title might suggest, Taemin is not planning to stop dancing anytime soon. Instead, the title signifies him expanding his horizons.

“Through my music, I want to deliver a different catharsis, something that’s very refreshing,” he told TMRW Magazine in an interview. “For example, you can feel catharsis through very upbeat music or by falling in love, but this is a different, unique style of catharsis.”

In the song, he sings “it’s painful as much as I can’t breathe but also magnificent” as his hands are tied together by silk and he’s surrounded by red-clad dancers.

Later, Taemin looks into the camera, a restless gloved hand travels through his blue-gray hair as he whispers a demanding “destroy me more” before dropping into the chorus a final time.

The chorus sings of more destruction, leashes, and pain. All supporting his “unique style of catharsis.”

Moving through the album there is a slow, subtle slide from the spicy first track into the very last song, ‘2 Kids’. At first listen, these first and last songs can be considered polar opposites. However, on closer listen, it becomes clear that the songs complement each other.

Taemin goes against the current

Taemin explained to TeenVogue that “Act 1 is about rebelling against the ordinary and the process of finding a new ego.”

Where “Criminal” was a rebellion, “2 Kids” feels like putting yourself back together after a rough night or rougher break-up and rediscovering the self.

The MV for “2 Kids” was released in August and filmed in Paris earlier this year. The video opens with Taemin’s face down on the street as unbothered cars pass behind him.

He rises, as if awakening from a long, tumultuous night, his lip bruised. Where Taemin always surrounded himself with dancers in the “Criminal” MV, in “2 Kids” he is alone.

“Leave me alone, let me be alone” he sings while walking down the Parisian street, dance erupting from his body.

The ending of the MV shows Taemin sitting on the ground as the camera zooms out and away. It’s an ending but not a conclusion as Act 2 will continue the story.

“In the next album, I wanted to show myself rising up,” he said in his ‘Criminal’ MV commentary video. “The current state is when I’m having difficulties and later it’s a happy ending.”

Taemin is known for his duality; his face a 6v6 emoticon when smiling and soft-spoken voice are a sharp contrast to the edgy and often carnal persona in his music.

Taemin has no regrets

Despite this new album and accompanying MVs feeling different from Taemin’s previous work, there are still many familiar elements.

Taemin is dressed in high fashion, including but not limited to pieces by Martin Margiela, Gucci, Dior. He can once again be seen with a smudged brown shadow around his eyes, a continuation of the exploration of androgyny in his hits ‘”Move” and “Want.”

Plus, his well-known (and loved) T-pose makes a short appearance in the ‘Criminal’ MV.

“I have no regrets about taking risks to express and differentiate myself from others as an artist,” Taemin said in a 2019 interview with Allure. 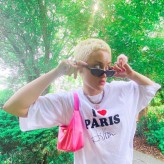 Yaroslava Bondar (pronouns she/her) is a Russian-born, Holland-raised, US-based writer and theater maker. She's a senior at NYU, double majoring in drama and journalism. Her interests include, in no particular order: climate change, kpop, constellations, and green tea.