Hustle like Chris Hall, the NYC entrepreneur behind the Kickster app

Right now, somewhere in NYC, 24-year-old entrepreneur, Chris Hall is plotting his next move. Over a short time span, he has already proved himself a worthy hustler.

At 16, he was Carmelo Anthony’s photographer and six years later he would become co-founder of Kickster, a mobile and desktop platform designed to keep users on top of all the latest sneaker release dates and sneaker news.

He fits the part of the modern “jack of all trades,”  because his repertoire of creative talents proves it and his swagger shows it, but, right now, Hall is betwixt ideas.

The full-time entrepreneur has put Kickster on hold (prob developing that A.I. into its interface) and has turned his focus towards a new project called Showroom, his podcast BEYOND, and helping creatives link up.

We caught up with Hall at our offices in NYC, where we discussed his entrepreneurial skills, the stresses that come with success, and staying on top of the game.

Hall’s come up story is one for the books. He attended an NYC film high school where he obtained the skills to become a pro-lensman and besides shooting flicks of Carmelo Anthony at 16 he would also go on to work with Netflix, AXE, DJ Khaled, and The Young People’s Chorus of NYC (YPC).

At YPC, he would begin to harness the digital marketing skills he has today. During his travels to various countries with “the best youth chorus in America,” he would have the opportunity to not only sing with them but also operate YPC’s in-house photo/video production and social media.

It’s obvious that Hall was “spending time backwards”  at a young age and, trust, his shine wouldn’t go unnoticed. Bright people always link up and a friend from high school would introduce Hall to Mohammed Mosayed, future fellow founder of Kickster.

Little did the two know that their creative minds were a match made in heaven. At the time Mosayed was working on iSwapp, “a hyperlocal better version of Craigslist,”  or a “modern-day version of LetGo.”

During the development of iSwapp, Hall and Mosayed would strike gold and think of taking the iSwapp concept to the growing market of sneakerheads. To lure them into the buying/selling platform they thought of, Mosayed would then build the sneaker release calendar app, Kickster, within a few days.

ME: “HOLD UP HOLD UP I HAVEN’T EVEN STARTED YET!! JUST WAIT ‘TILL WHAT I’M DROPPING 2018!!” After half a Million downloads of Kickster I’m about to launch a new company under our @mosayed_ and I’s management team before Summer: it’s a new website and NEW BRAND, a sister product to Kickster which is relaunching late summer. Details to come! Pic from 1 Year Ago at Snapchat IPO. Let’s goo

Twenty-four hours later, after its launch, Kickster had been downloaded at least 30,000 times and cracked the top 30 sports apps in Apple’s application store. In just under a year Kickster was also able to rack up 150,000 downloads. Sheesh, imagine putting those numbers on the board at 22.

Now, he and his team have decided to rework the platform and plan on re-releasing it at the end of this year. Hall spoke about the decision to pull the platform that acquired 400,000 users over three years and the goals he plans to achieve for Kickster. He said,

Sometimes it’s important to take a step back in order to progress forward and that’s exactly what Hall has done with Kickster. Still, that doesn’t mean that the ideas stop flowing.

Currently, the NYC native is working on the next big thing for creatives everywhere that want to produce their own fashionable clothing.

Still, under construction, Showroom.me hopes to become an affordable online marketplace for future designers that want to create their own fashion brand.

Hall discussed what the final product will be once Showroom hits the web. He said,

“Anyone will be able to make their own fashion brand. It’s literally like you come with your design, you upload it, you choose your product line that’s tailored to the products that are already popular in streetwear, like literally what Kanye uses, what Supreme uses, and what Anti-Social Social Club uses. So, you can’t really go wrong. Then once you do that you’re done and get a site automatically generated for you that looks really professional. Then you can send it out, make a sale, you get paid, we make it for you, and ship it…”

Showroom has already raised $150,000 in investment money, but Hall is not stopping there because of another fire project in his back pocket. Still, in its early stages, the platform he plans to launch very soon will help people who want to become influencers.

Already, within five weeks, Hall has managed to snag some pretty popular clout specialists whose followers range from 350 thousand to 9 million. Thus far he’s worked with his homie Sara Dietschy to throw events like #HustleNY.

Realistically, all Hall hopes to do is push the culture forward. His “technology-driven merchandising company that’s for everyone,” will inspire people who are the biggest influencers on earth with 10 to 20 million followers down to a 16-year-old kid with no money that was inspired by Kanye.”

Another one for the history books. #HustleNY

Trust that to get to where Hall has arrived today was no easy task. He has had to sacrifice financial stability and a normal social life for the past four years. How else do you think the young OG has come so far?

Besides sacrificing himself to the culture, Hall has been able to keep a certain energy around him that keeps him from tapping out. His team is a support system. Hall touched on how crucial it is to surround yourself with those who are like-minded. He said,

Of course, with all this hustling you can best believe the pressure is always on, but that doesn’t matter, Hall, knows that the messed up thing about business is that “everything results in more stress, even success.”

Getting through the close calls for meeting rent requirements, losing founders, and societal pressures have proven that Hall can handle his psyche. The NYC entrepreneur spoke on staying level headed in this game. He said,

“In the end, I actually believe in myself because I know I can do it.” 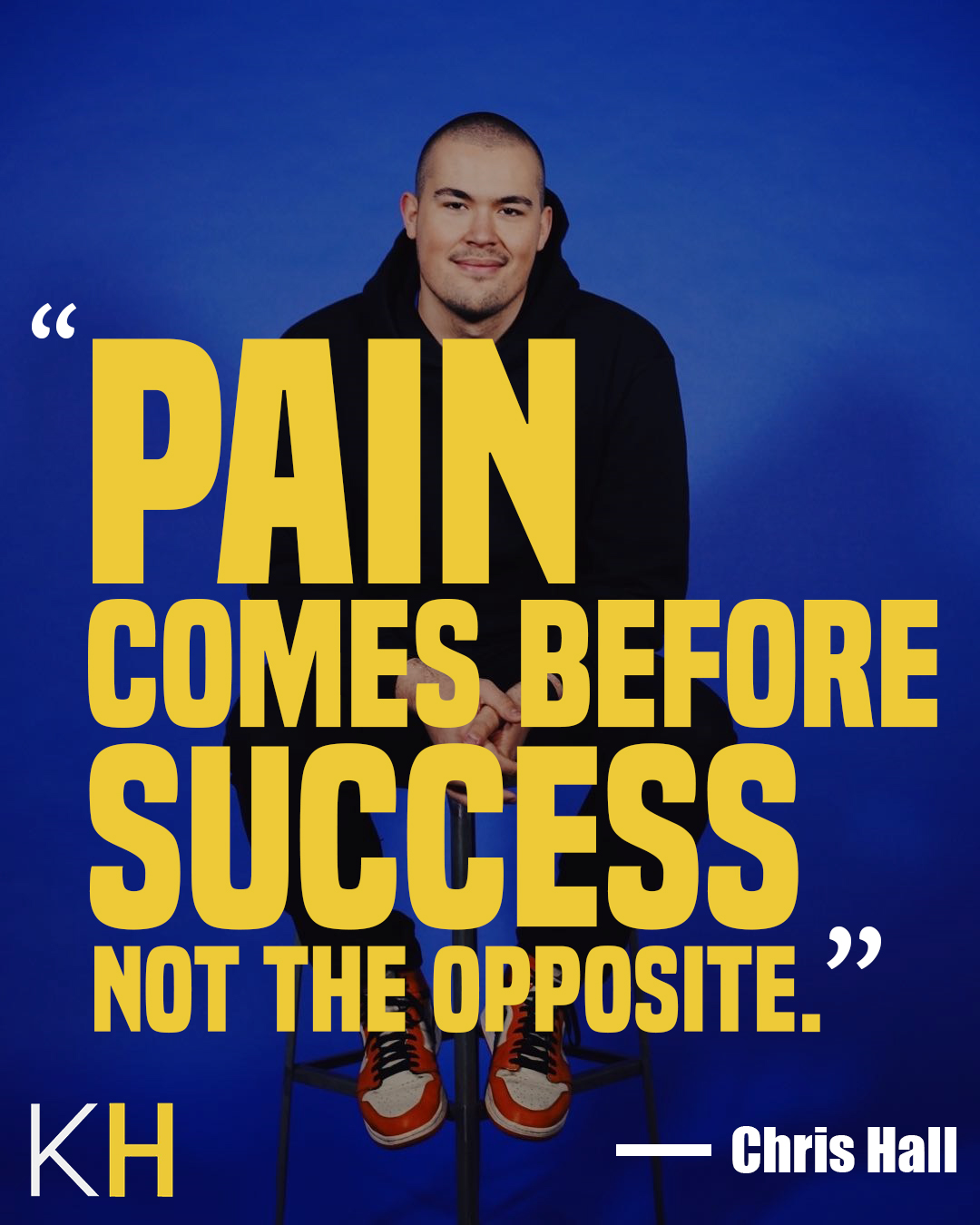 Hall for sure is on his way to the top and is worth learning from. Ending our conversation, Hall left advice for the young bloods on their own entrepreneurial come ups. He said,

“If you’re sacrificing a lot, especially young people that don’t have the financial freedom to stop working for 2-3 years, you should really like what you’re doing so you can feel excited every day to do it… I think another great skill to have is learning to identify people who are faking.”

There’s no space for phony boys in the kingdom of creativity, culture, and success. To get in, you have to work hard and sacrifice. Trust that without that combination you might as well just stop what you’re doing right now and kick rocks.

If you need to get back on track take a page out of Hall’s book, look at his journey, and apply it to your vision.

Even he takes inspiration from his peeps every day. Checkout his podcast series “BEYOND”below. It’s an in depth look inside the minds of accomplished creative and cultural entrepreneurs.

Previous ArticleWhat is FEMA doing for Puerto Rico? An investigation
Next ArticleHouse of Highlights’ Omar Raja gets clips from All Stars — and doesn’t always use them