James Conner’s story is the inspiration we all need to push through right now
By Alessandro Malave June 16, 2020

“You just don’t run across individuals like him very often, whether in football or otherwise. . . his character, his personality, his smile, his courage; this is someone I would want in my locker room,” said Dr. Stanley Marks, Chairman of the University of Pittsburgh MC Cancer Center.

“During the course of his treatments, he would routinely walk around and talk to other patients and try to give them hope and inspiration.”

Dr. Marks was talking about James Conner, the Pittsburgh Steelers’ running back with a tremendously emotional story. Conner has faced an immense amount of adversity in his young life, much of which has been revealed to the public. His autobiographical book, Fear is a Choice, releases today, and chronicles the journey from his perspective.

I’m thrilled to announce my autobiography, Fear is a Choice with @HarperCollins – available for preorder now!! Link in my Bio. Can’t wait to share my story with everyone. Appreciate all the love and support.

James Conner has become a household name in Pittsburgh, but his story should be known everywhere. He has encountered some of the tallest hurdles that life can throw, and time and time again he has prevailed.

Sports are such an important part of culture but the athletes that play them vary in such great ways. Some athletes milk their talent without breaking a sweat, while others work for years to get an opportunity.

Some sail smoothly straight to the pros, and others can’t seem to catch a break. James Conner’s story is an emotional demonstration of the power of human life; he is an inspiring figure whose name should signify perseverance in every household.

James Earl Conner was raised by his parents, Kelly Patterson and Glen Conner Sr., in Erie, Pennsylvania. He attended McDowell High School, where he rushed for 1,680 yards and 26 touchdowns his senior year. He committed to play collegiately at the University of Pittsburgh.

Conner rushed for a team-high 799 yards and 8 touchdowns his freshman year and broke Tony Dorsett’s school record for most rushing yards in a bowl game with 229 against Bowling Green.

His sophomore year Conner’s success continued as he rushed for 1,765 yards and set an ACC record with 26 rushing touchdowns. He was named ACC player of the year and earned AFCA first-team All American honors.

Tragedy struck the following year. Conner tore his MCL in the Panthers’ season opener, ending the season before it had even begun. “I cried like a baby,” Conner told NFL Network. “You work so hard, and the season is taken from you just like that. It’s tough.”

During his rehab process, Conner was diagnosed with Hodgkin’s Lymphoma, cancer of the lymph nodes. Conner had a 14-centimeter tumor surrounding his heart. “Without treatment, this could have been fatal,” Dr. Marks said.

Conner immediately started aggressive chemotherapy, enduring 12 total sessions. The process was grueling, to say the least. A mix of vomit, painful tubing and red urine were just some of the treatment’s effects. 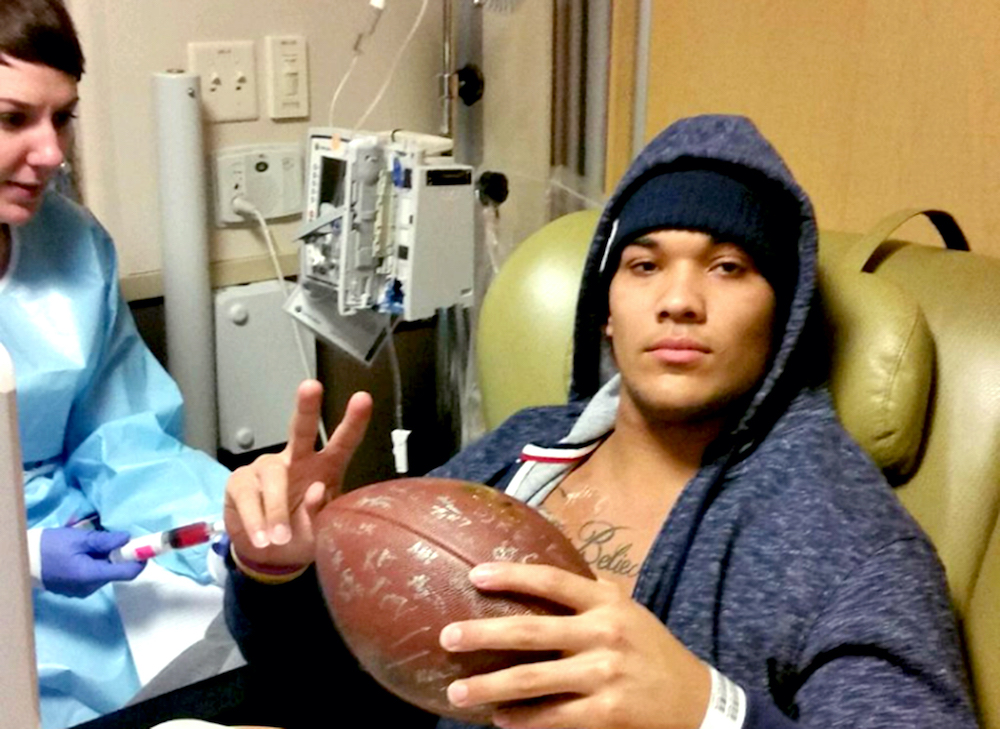 There was an emotional toll on Conner as well. “I’m not going to say that I wanted to die right before receiving treatment six, because I wasn’t ready to leave this earth. But I definitely remember sitting in that green leather hospital chair, waiting for the nurse to mix up the chemo batch, and thinking, I do not want to be here right now. I wanted to get away, away from … everything.”

Throughout the ordeal, Conner’s loved ones never lost faith in him. “I’ve dealt with it and I know how to deal with it,” said Pittsburgh head coach Pat Narduzzi, who lost his own father to Hodgkin’s Lymphoma. “ You know he’s a fighter, he ain’t getting knocked, he’s gonna make it.”

“It’s important for anybody who’s dealing with cancer not to go through it alone,” Conner said of his teammates. “These boys never left my side… 4 in the morning I’ll call any one of them if I needed to, and they’d be knocking at the door… this is family, man.”

Conner’s fortune took a turn for the better on May 23rd, 2016, when he announced that he was cancer-free.

Conner rebounded during the 2016 season, rushing for 1,092 yards and 16 touchdowns. NFL scouts noticed his performance, as he became a hot topic pre-draft.

Just three months after being diagnosed cancer-free, Conner had added another thousand-yard season to his resumé and fortified his future potential on the professional side.

Good things continued to come his way when he was drafted by his hometown Steelers 105th overall in the 2017 NFL draft.

He had been predicted to be a fifth or sixth-round pick pre-draft, with Sports Illustrated even ranking him as the 12th best running back. Conner was drafted in the third round.

“It was the best day ever. It was a hard road to get there. For me to finally accomplish my dream, it was a blessing” Conner told NBC.

Following another MCL injury during his rookie season with Pittsburgh, Conner exploded onto the scene with 973 yards and 13 total touchdowns the following year. He was named the AFC Offensive Player of the Month for October of 2018 and was selected to the 2019 Pro Bowl as a starter.

Conner handed in another solid season in 2019, garnering 715 scrimmage yards and 7 total touchdowns despite a turmoil situation at the quarterback position.

He will never forget his text messages exchanged with Eric Berry, the former Chiefs safety who was diagnosed with Hodgkin’s Lymphoma in December 2014.

“We had like a 30-minute conversation and he just gave me the whole rundown of what to expect, because that was before any treatments,” Connor said of his first conversation with Berry. The two continued to share text messages throughout Conner’s treatment.

“We share stories. We know exactly what it’s like,” Conner continued to ABC. “It just goes to show with a strong mindset you can still achieve your dreams. It’s a mental fight. We have a tough task playing in the NFL. We just try to be an inspiration to others.”

And it is in inspiration to us all to encounter the story of James Conner. The fortitude, resilience, and drive that he showed throughout his MCL injury, cancer treatment, and eventual rebound to his childhood dream-team is awe-inspiring.

It is not every day that the off-field stories of athletes are adamantly displayed. And when they are, it often involves legal issues, media-generated controversy, or financial troubles.

The fact that James Conner’s story is widely shared is a blessing for all. The tribulations that this young man endured represent a source of inspiration for all of us.

Blessing to be a blessing.. Bought my pops a car he was too hype 😂🙏🏽💪🏽

To hear it from the man himself, pick up James Conner’s new book, Fear is a Choice, out now.

Sports are a fascinating and important part of culture, especially the behind-the-scenes aspects.

Previous ArticleNo Kaitlin Bennett, Pride Month is not canceled because of BLM
Next ArticleCheck your privilege: How to approach BLM if you're not Black
MOST POPPIN’