At 17, a young Ghanaian Londoner was lent a camera so that he could take pictures of his brother modeling clothes that he wanted to sell on eBay.

“It was a wrap after that…”

Inspired by the power of film and storytelling, Curtis Essel would then immerse himself in digital photography and literature.

He would further prove his loyalty to his craft after investing in one hell of a camera, a 35mm Nikon F100 with a 50mm 1.4 Nikko lens.

Now, 24, Essel is pushing the boundaries and his works are shifting cultures in ethnic communities. His short film, AGYA, was well received and was one of four projects awarded the Getty Images Array Grant.

Pleased to introduce Curtis Essel @33bound our 2nd Array grant winner 🌟⠀ ⠀ ⠀ “I’ve recently completed a short doc/film titles ‘AGYA’ which means ‘Father’ in Twi (Ghanaian Dialect) with father of four, Yaw. This piece helped me question what is fatherhood? is it financial support? is it emotional support? which one is more valuable?” – Curtis⠀ ⠀ ⠀ #ArrayGrant

Essel’s visuals are raw, a result of consumed culture, and are focused around what the viewer feels instead of what they see.

Delving deeper into his aesthetic, his thought process behind AGYA, and his camaraderie with fellow Getty Images ARRAY Grant winner Shawn Theodore, Kulture Hub caught up with the visual artist to find out what has gotten the Londoner thus far in his career. He told us the inspiration behind his beautiful visuals. Essel said,

“Growing up in New Cross, South East London in a Ghanaian household creates a synergy of two cultures that constantly informs the way I capture. I am also inspired by the content I consume; whether that be podcasts or short films, I gravitate towards what will essentially inform my product. Despite all the above, I always aim to create content that has the same effect and impact with just the audio and no visual. The focus is centered more on how the viewer feels as opposed to what they see.”

Simply put, Essel was created to create. To prove it, his short film AGYA and it’s thought process were inspired by serendipitous events. He knew that there was a special reason why he missed a flight back home to the UK from Ghana.

Especially because he met Acquah the second eldest child of Yaw, a father of four and the main character of the project, that same day.

AGYA which translates to ‘Father’ in Twi (Ghanaian Dialect), was captured and told during the four days Essel had to wait to go home; because of his creative efforts, he brought a new meaning to the value of fatherhood. Essel spoke about the questions he asked himself while editing the film and how Yaw’s story touched his heart. He said,

“During the editing process of the film I began to reassess the relationship I have with my own father and started to ask myself; what is fatherhood? Is it financial support? Is it emotional support? Which one do I place more value towards?”

“Honestly, I still don’t have a concrete answer to these – I’m still questioning myself day by day. Whilst conversing with Yaw and observing his expressions, I never doubted the pain he felt when sharing his inability to sufficiently provide for his family, I had huge admiration for him as despite the hardship he faces – he continues to hope and strive for a brighter future.”

Truly, these are the stories that need to be told and Essel is proving that it can be done. We can only hope that creatives continue the mission of combatting the lack of proper representation in media storytelling of POCs. In a way, Essel was passed the baton when him and Philadelphia based photographer, Shawn Theodore would cross paths.

Theodore who was also a Getty Images ARRAY Grant winner not only shares the same love for visual arts as Essel but also knows that it’s important to create work focused on telling diverse and inclusive stories.

He spoke on his “Church of Broken Pieces” grant submission which was an investigation of the African American and African Diasporic life within disappearing Black American neighborhoods. Theodore said,

“I want to convey to my audience the importance of the ever-changing black neighborhood as the most crucial part of my visual narratives to establish what I call ‘Afromythology’; an existence that is punctuated by the novelty and surprise of mythology while being completely interwoven into the quotidian surroundings of African American life, yet it is also one that conjures narratives that alter histories, alter memories and uplift spiritual resistance to provide metaphorical connections to African Diasporan legacies and traditions.Thus, the goal of my photography is to merge the various ideas of spiritual surrealism and traditional corporeality of the shifting African American neighborhood to create a narrative that conveys the spirit, rich cultures, and histories driving a robust vision of African American experience.”

When Essel and Theodore met it was an instant magnetic connection.

Both shared a common humble ground in inspiring the thousands of creatives who will, now, rise to the challenge of this grant annually, taking on the responsibility of “imparting viewers with insight,” and knowing the importance of supporting other artists. 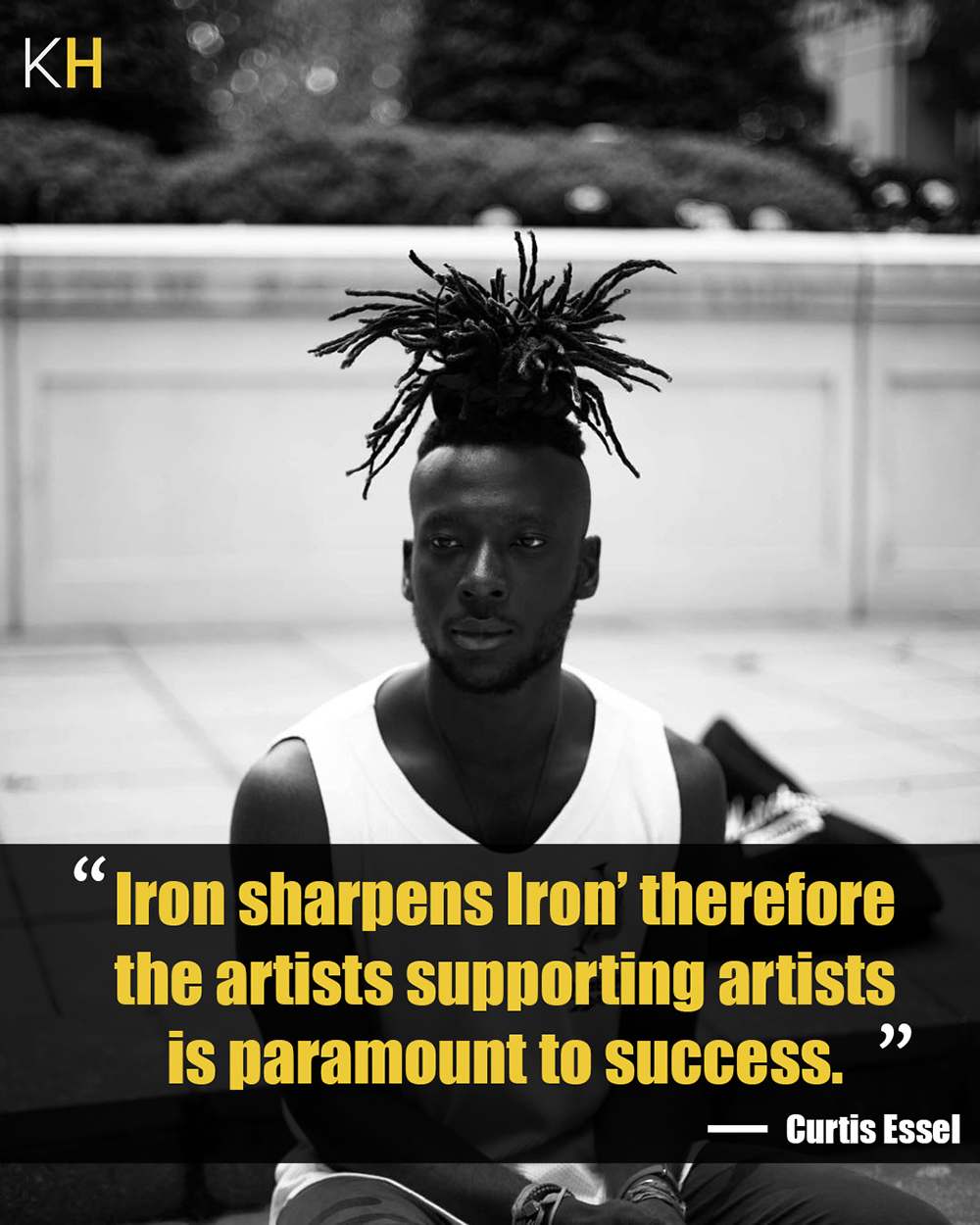 Essel discussed the time his new found mentor invited him to lunch with producer and writer of Everybody Hates Chris, Ali LeRoi.

“Everybody Hates Chris’ aired at such a poignant time in my teenage years, so when Shawn invited me for lunch with the co-creator, producer, and writer of the show Ali LeRoi I was more than grateful. The value of having the ability to ask such an experienced creator in the industry questions I’ve been longing for answers to is something that I can’t quantify and I’m thankful for.”

This mentoring moment was very special to Theodore who added,

“Part of my practice involves mentorship as well, and after seeing his work I made a point to introduce him to television producer, director, writer Ali LeRoi over lunch. Watching Curtis ask pointed questions regarding the entertainment industry and receiving immediate feedback was wholly satisfying. Here’s this amazing and talented filmmaker on his first trip to the US, and I’m able to shrink the distance between the known and unknown factors with regard to the direction of his burgeoning career by introducing him to a seasoned professional. That kind of personal investment in young artists is crucial to their success, and it’s the kind of thing that I wish I had entering my profession.”

Essel and Theodore def have big things in store for their creative careers and perhaps the two might even work on a film together.

Separately with their latest grant winnings, Essel strives to “shed light on the beauty and hope Africa possesses to the world’ and Theodore hopes to crush the several projects he’s currently working on with the brand new lens he can now purchase.

As they both embark on their artistic journeys we can be certain that they will get the perfect shot. Just take a page out of Essel’s book. He left some words of wisdom for young creatives out there trying to succeed in the same lane. The visionary said,

“Don’t underestimate the power of practice and speak your greatness into existence.”

Previous ArticleHow 'Dangerous' Donnie Marshall defied odds to pave his own lane as a pro boxer
Next ArticleNicki Minaj vs The World: Why her bankability outweighs her likability
MOST POPPIN’