All bets are on LeSean Thomas, Stanfield, and FlyLo for Netflix’s ‘Yasuke’
PHOTO CRED: sam.hadley.illustration, zdjeciabezuzyteczne.pl
By Ethan Seidenberg June 25, 2020

Any anime involving mechs, magic, or samurai already has an insanely intriguing factor to it, but what about a show that combines all three?

That’s exactly what the upcoming Netflix original anime Yasuke, starring LaKeith Stanfield, will be all about. While much of the series is still under wraps, what we do know so far suggests that it’s going to be a truly epic tale.

Here’s what we know so far about Yasuke, the upcoming Netflix anime based on the real historical figure: a famed Black samurai from 16th century Japan.

It’s got magic, mechs, and samurai

We don’t know too many details about the show’s plot, but we do know that it’s going to have these three amazing concepts mixed together. Shows with just one of these things are already interesting, but putting together all three is sure to be an exciting combination that caters to a big audience.

The story will follow the titular character of Yasuke in feudal Japan as he’s charged with the task of protecting a mysterious child who’s threatened by dark forces.

Who this child is, what these dark forces are, and just how you somehow have mechs in feudal Japan will hopefully be answered soon when the anime releases on Netflix.

The cast and crew are brilliant

If the premise of the show isn’t enough to draw you in, it’s also got a diverse and immensely skilled crew that’s making it all happen. In addition to starring Stanfield, it’s being created and directed by animation veteran LeSean Thomas and has Flying Lotus in charge of the music. All three also serve as executive producers for the show. 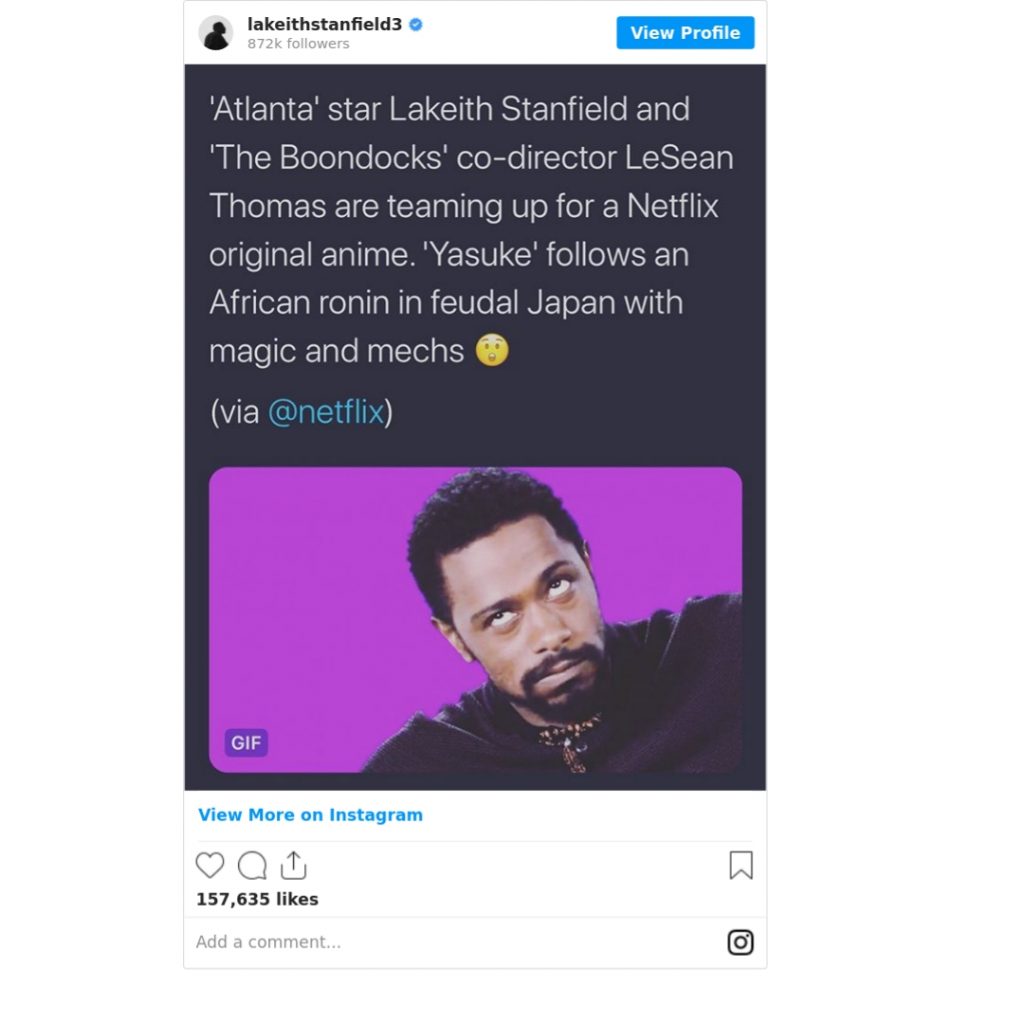 Stanfield is known for his role in the TV series Atlanta, and he’s also featured in films such as Sorry to Bother You and Knives Out. Now, he’s entering a new domain as the voice of the series lead, Yasuke.

The Grammy Award-nominee Flying Lotus has created music for Adult Swim, in addition to working with artists such as Kendrick Lamar and David Lynch.

He’s also no stranger to bringing his music skills to anime, having written the soundtrack for the short film Blade Runner Black Out 2022 in addition to contributing music to Carole and Tuesday.

YASUKE is gonna be great, we are working with one of the top anime studios in the world to bring this crazy story to life. So proud to be part of it and glad to finally share the news thats been brewing for almost a year now @netflix

LeSean Thomas is an artistic legend. A television animation creator, producer, director, writer, as well as comic and artist, he’s the intellect behind a variety of incredible shows.

In addition to Yasuke, he’s also the creator, executive producer, and showrunner of another Netflix original anime known as Cannon Busters.

He’s also worked as a director and lead character designer for the award-winning series The Boondocks, and he was a storyboard artist for shows such as The Legend of Korra.

With these creative powerhouses behind the creation of Yasuke, it’s set up to be an incredible anime.

Yasuke was a real-life samurai

What history books won’t tell you is that the titular protagonist of the anime is also a historical figure from 16th century feudal Japan.

Many historians say Yasuke came from Mozambique and traveled to Japan as a part of a Jesuit missionary entourage.

His legend doesn’t end with that, however. Yasuke quickly gained the interest of the famed daimyo Oda Nobunaga, who was one of feudal Japan’s unifiers.

He swiftly rose through the ranks and eventually became a full-fledged samurai. Not only that, but he also was said to have been a trusted friend of Nobunaga’s.

After Nobunaga’s suicide following the betrayal of his general, Akechi Mitsuhide, the history of Yasuke’s life, unfortunately, appears to fade away. Yasuke’s legacy still lives on, however, and this anime will only help strengthen it as more people learn about this famed samurai.

Ethan Seidenberg is a passionate writer, an avid traveler, and occasional musical nerd from the Chicagoland area. He loves anything related to creativity and the arts! When he's not trying to travel the world, he's usually reading, writing his latest story, or maybe even dabbling in a bit of cooking.

Previous Article#SexWorkIsWork: How can we protect sex workers moving forward?
Next ArticleWhy our American history proves rioting is in our blood
MOST POPPIN’