Fini Shoes is one of the fashion industry’s newest contributors establishing themselves in the game. The innovative new brand comes into the game with the intention to bring comfortability and versatility in ways you have never seen before. But how so? Fini brings you one shoe with three accessories that morph it into five different pairs.

Their site describes itself as “a lifestyle shoe engineered and designed for maximum comfort and durability without forgoing the luxury the aesthetic.” After getting the chance to test out my own pair, I can tell you that they aren’t lying!

Kulture Hub was able to catch up the creator of Fini Shoes, Damilola Adepoju, about his journey so far, the vision behind the brand, and how he plans to make these a household name. 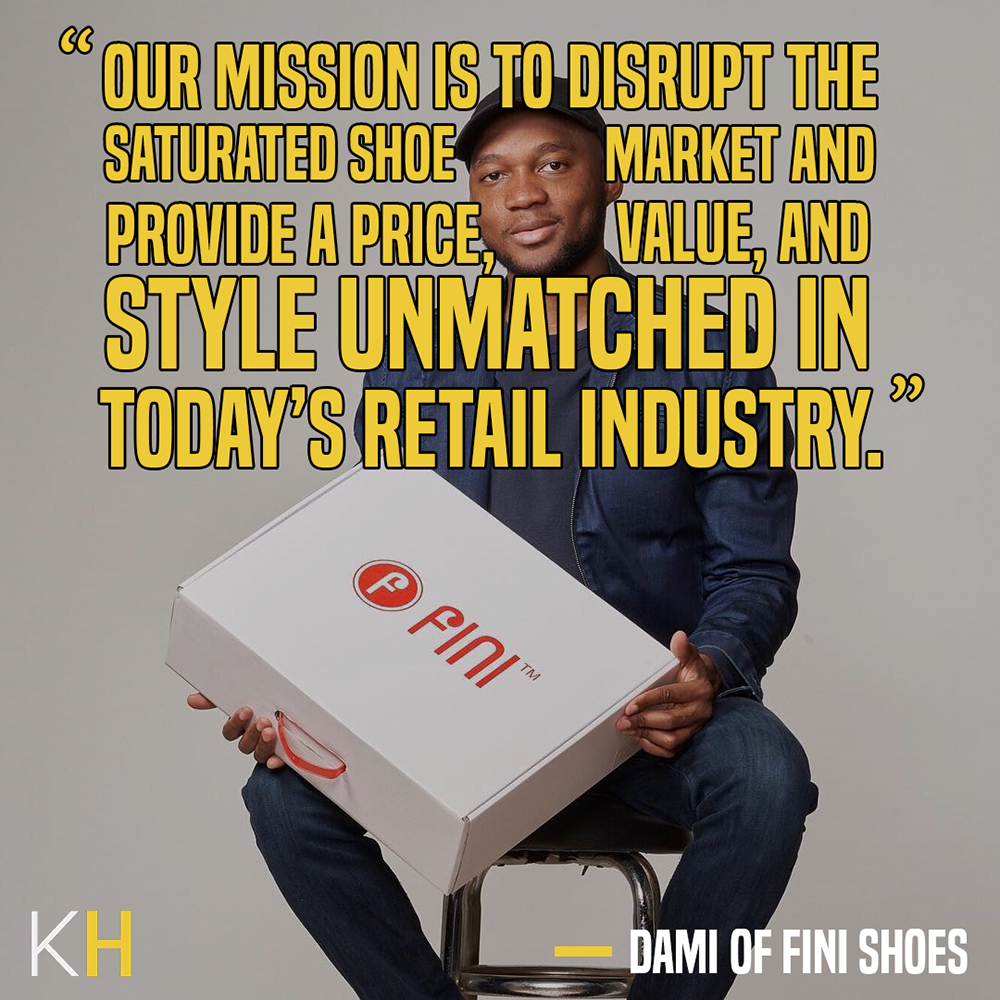 Originally from Nigeria, Adepoju came to the US in 2008 and began going to school at Clarkson University. Despite studying Mechanical Engineering, Dami always had a thing for footwear. He explained to me,

“I always was a shoe collector, but never because how popular the shoe was. I always collected shoe that I liked, no other reasons.”

The idea of Fini came about in 2013 when Adepoju went on a spring break to Jamaica and realized that clothes and shoes, in particular, were not that versatile. Leaving Upstate New York in the heart of winter, and going to Jamaica will get you thinkin’.

From there Adepoju made it his quest to create a shoe with versatility, a shoe that can be worn in the Tropics of Jamaica, and the of New York’s Winter — a shoe that is able to be worn at work, then straight to the club!

The key differentiator that sets Fini shoes apart from all market competitors is the unique, never seen before customization element. According to their site:

“THE SHOE ALLOWS THE WEARER TO ADD MULTIPLE ADD-ONS THROUGH A SEAMLESS AND MINIMAL ZIPPER CONCEPT; THE WEARER HAS THE ABILITY AND CHOICE TO SWITCH OUT PART OF THEIR SHOE TO BECOME A COMPLETELY NEW SHOE. IT CAN BE WORN IN A VARIETY OF WAYS AND CAN ADAPT TO ANY ENVIRONMENT DEPENDING ON THE SHOE ACCESSORIES AVAILABLE.”

For all of the outfit re-wearers out there, Fini will make your life a whole lot easier.

With this new and creative product, owning a pair of Fini’s allows you to switch it up literally whenever you want. Dami credits his love for fashion and attention to detail to his mother, who constantly instilled the value in always looking presentable. He told me,

“From young age, my mother always told me you only get one shot at a first impression, so I always want to dress myself the best I can everytime I leave the house.”

The road to Fini’s 2018 release was not an easy one. Adepoju made over seven prototypes in several different factories even across the world. The manufacturing of Fini originally began in NYC but after securing the international partners is now producing his products in China.

Adepoju describes the process of working with sketch artists, to then making a three-dimensional model, and finally finding a factory to get it right as “daunting.”

“When you are working with a factory, and they tell you ‘Yeah, we can do it give us 3 weeks.’ You give them the time, and then they say they need more time. Then they send you something that is not what you envisioned.”

In addition to factories failing to manufacture the product to Adepoju’s liking initially, they’d often ask for more money to try get it right.

When they still didn’t create the shoe correctly they’d simply tell Dami that they did not want to do business with him any longer. While constantly being told that his vision is not possible to create, he was also feeling the pinch from his parents to find a job within his area of study at Clarkson.

“My parents started to be very vocal letting me know I that I had to get a job, so I did. After only working at my first job for only a month I went on to find a job in which I had flexibility in my hours so that I could still work out Fini ”

Adepoju stuck through, and soon enough, Adepoju was able to able to not have a day job any longer and make Fini his sole focus.

In 2018 Fini Shoes finally debuted. Running at $129, and available in colors wheat, black, and white, he offered a shoe unlike any other product on the market. Fini even held a pop up shop this year at New York Fashion Week.

Regarding Fashion Week, Adepoju also says that something that people don’t realize is how many events are actually going on at once.

There are brands from all of the world here in New York, trying to get as many people as people possible to come to their events. So in reality, these fashion week events are not really that top secret!

Adepoju plans to follow up his 2018 New York Fashion Week appearance by bringing Fini into stores within the next year!

For now, Fini is available to be purchased on FiniShoes.com.