Who is Elise Swopes? The Chicago creative keeping the dream alive
PHOTO CRED: @swopes
By Joshua Eferighe May 16, 2018

The cat is out the bag — the creative life is not as romantic as advertised.

It’s a degree your parents won’t jump out the window to fund, it’s definitely not the most lucrative and the odds are not in your favor.

Whether you’re a musician, writer, graphic designer, etc., the idea of making something out of yourself can be daunting in an era where everyone seems to be dabbling in their creative side.

In my own world ✨

Everyone raps. Everyone’s a photographer. Everyone models.

A smartphone today gives you a camera that would cost you a fortune a decade ago and with social media, it’s never been easier to go viral or get content out to the masses. The barrier of entry has diminished in the face of hi-tech’s assessability.

So, you can either blame the saturation of your beloved craft or use the resources that are literally at your fingertips.

Chicago native Elise Swopes is an artist specializing in photography, influencer marketing, and graphic design. She decided early on to take advantage of her skill sets and her life has never been the same.

At the current age of 28, Elise Swopes has managed to make a living out of taking and editing photographs on her iPhone. Yes, you heard me correctly, her iPhone.

What started off as a passion of mashing her playful imagination up against her gorgeous stills of the city ended up turning into a full-fledged career with an ever-growing clientele and fan base demanding more her work.

Swirling through city streets on magical clouds, exploring with an arbitrary giraffe or taking in a beautiful storm that never was, are just some of the concepts that Swopes has ingeniously innovated in her editing. 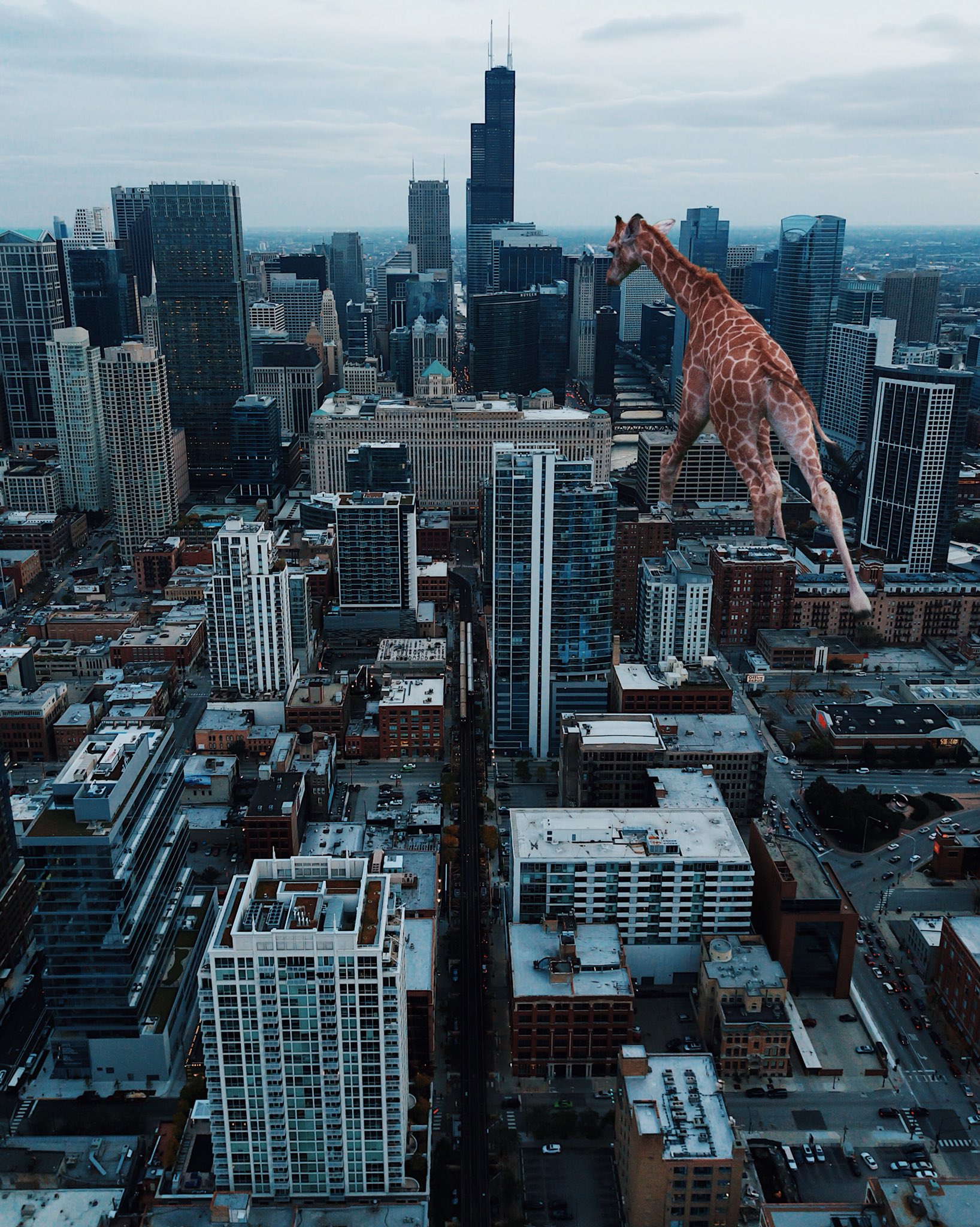 Described as an ‘Instagram influencer’, Swopes has leveraged her IG following of 300,000 to work with brands such as Adidas, Dos Equis, Beats By Dre, Verizon, The Chicago Bulls and many more.

One could say she’s made it. I mean, waking up every day knowing your job is something you’d do regardless in your spare time is the epitome of the creatives’ dream.

The possibility of your art providing the quality of life you want for yourself is what millions of millennials and artists work towards every day, and Swopes is doing it.

This piece is inspired by @jamesdcawley, an @AdobeStock contributor. As you know, each month for this year I’ll be creating something fun using a specific theme from #AdobeStock. James’ style is primarily based in nature and has an amazing Earthy feel. I used an iPhone photo of mine to blend with three others to create this surrealistic city landscape. #AdobePartner

But how? Is it because she got in the game early? She did first try her hand at design in 6th grade. Schooling? She did study design at Columbia College in Chicago.

If you ask her, it’s about being passionate, protecting your energy and actually “putting your work out,” as she stated on Chicago’s local new program Windy City Live in a segment called Chicago Social Media Superstars yesterday.

It really doesn’t matter what the craft is, when you’re a creative, insecurities and doubts come with the territory. Pushback from parents, the starving artist lifestyle and hanging on by the strength of your passion is not for the faint of heart and it’s why many artists let their dreams die.

Swopes had to make difficult decisions too. With one semester left, she was faced with the task of deciding whether she should get her degree or roll the dice on an opportunity in Japan.

You have two options: Step forward into growth or step back into safety. Growth can be uncomfortable but there’s nothing more uncomfortable than being stuck. Take chances this week! You’ll surprise yourself 💜✨

She chose that latter; and when she emailed her teachers to inform them of what she would be doing the response she received from one professor, in particular, confirmed it was the right thing to do.

“While all the responses were encouraging, it was one email response that read, “I am so disappointed you won’t be in class,” that brought me to the moment when I knew it was time to take a break from school,” she writes on her website. No one will want this as much as I do. It’s time to take that step and make my dream full time.”

Swopes is where she is today not only because she’s a gifted photographer and editor, but because she bets on herself and the love she has for her art. Moreso than choosing to pursue her career over finishing college, every day she’s intentional about her purpose and vision, which is why it translates into success.

Swopes has since grown what started off as photography on her phone into a mini business for herself.

Happy 181st to my favorite city in the entire world. Thank you for being the canvas to my imagination for so many, many years. 💕 Here’s a current favorite of mine in celebration 😊 Have a beautiful Sunday!

She has a newsletter called Swopes Note, which is a monthly collection of blogs, tutorials, free wallpaper, artist features and ‘Health is Wealth’ readings.

She gives tutorials where, once a month, she create either a video of how she edits images using just her iPhone. On top of all that, she sells prints from her online store.

Swopes is the perfect example of what it means to double down on yourself, your craft and what you love.