“I don’t really take any day for granted in terms of learning something new about the game,” – David Mark Zenon.

Zenon is an independent basketball trainer, training players ranging from youth leagues all the way up to the NBA. Zenon consistently trains a group including NBA Champ Serge Ibaka, Mason Plumlee, and Mitchell Robinson. His work has also led him to collaborate on an ESPN commercial with Zion Williamson.

“I just look at players and say ‘What’s your system like?  Where are you weakest at? And what are your goals?’”

Then it’s time to get to work.

Zenon’s consistent work ethic, detailed approach to film, and freedom as an independent trainer set him apart from the pack. His story is one of perseverance, and yet while having achieved some of his loftiest objectives, there are still more goals he has in sight.

“I grew up playing ball; my dad played ball with a lot of guys in the city.”

Like his father, Zenon grew up in the Bronx, until he was about 10 when he moved to Westchester. He went to Iona Prep, then moved to Northern Westchester where the elements of community were a lot different than they were further South. Still, a basketball fanatic, he kept playing in various leagues around the city.

“I’ve always been a basketball fan.”

Zenon grew up watching the 90s Bulls, marveling in their excellence and the wonder of His Airness. The thing about that team too, Zenon noted, was they all played within their roles.

Scottie takes the crown! 🏆 You voted @scottiepippen’s nasty poster on Ewing the winner of our All-Time Dunk Bracket!

Dennis Rodman was the rebounder. Pippen was the swiss army knife primary defender. Jordan was the star but could do everything.

“It’s kinda crazy to see how a lot of the same principles that team utilized… Once you stay within your role, anything is possible for your squad.”

From an early age, Zenon studied the guys his dad played with, analyzed their games. Real New Yorkers know how competitive the leagues around NYC are and how much talent the crop of players possess.

A New Yorker through and through, basketball was in Zenon’s blood; it was a passion coursing through his veins. And Zenon’s keen and insightful mind brought him to the world of training.

“When I first started training, it was more or less the fact that I needed to make money. I was out of school. I wanted to immediately go into coaching, but I didn’t really have the resources or the connections to do so.”

Zenon stressed how he needed to make money somehow, “and the same things I grew up learning, I wanted to emphasize and teach other kids how to do it.”

With the last five dollars to his name, $4.75 to be exact, Zenon went to the gas station to fill up his tank so he could head to a workout with a highschool kid. He found a quarter in his car’s change compartment, and with a self-deprecating chuckle asked the attendant if he could just put a quarter in the tank.

“It was just a kid looking to make his varsity team,” Zenon tells me.

Zenon worked the young man out, and his parents watched on. They ended up being so impressed that they told Zenon they wanted him to be their son’s trainer full-time.

“Is this what you do for a living?” they asked him.

Zenon responded yes, but his main goal was to work within the NBA or around NBA players.

It just so happened that that young man’s family was well-connected in the sports world, and introduced him to some very influential people. His foot was in the door, and that was all he needed.

Zenon notes how if he hadn’t taken the chance, if he hadn’t used some of his last quarters to get to the workout, he was giving up on an opportunity. A small opportunity, it seemed, but one that ended up serving as the impetus for his big break: Madison Square Garden.

“If I was gonna make up excuses or was gonna be afraid of the fact that I didn’t wanna do that workout, that was definitely going to be a hindrance, and I don’t think any of this would have come to fruition.”

“I didn’t realize how difficult it was or how good I could be until I started doing pre-draft stuff with guys that were going to go to Europe. It wasn’t even NBA stuff at first,” Zenon tells me.

The young man’s family got Zenon the opportunity to work with Madison Square Garden, and he worked the shot-clock for the Westchester Knicks.

“Any opportunity I had to talk with anybody in the arena, I did so. Whether it was just an official or an executive, it didn’t matter. I wanted to talk to anybody and everybody and just kind of know what they do, and develop that rapport with them.”

When Kristaps Porzingis was drafted by the Knicks, his agent reached out to Zenon, already knowing who he was.

“Listen, you know Serge Ibaka is looking for a trainer, you’re trustworthy, we know your work is good. We’re gonna give you an opportunity to work him out first, and if he likes you, you can stay around,” the agent told him.

Zenon worked out with Ibaka the entire Summer of 2017, and they have been training together ever since.

“Serge is a very particular dude, so if you’re not able to hold up to that standard, he’s not gonna keep you around. He’s a perfectionist, and he liked it,” says Zenon.

He explained how the basketball world is a small one, and meeting and making an impression on one player can carry over to something bigger.

Word spread of Zenon’s care, talent, and craft, and while he was pushing Serge and others to do more, he was also taking notes himself.

Serge is going to make his first All Star ⭐️ Team this season, but while in New York, it’s a Photoshoot.

Zenon ran into Hugo Lopez and other Euroleague trainers and was able to pick their brains and learn more about the game.

“It’s just been really awesome to see how many doors opened because of that.”

“It’s great to have that freedom to network and work with guys throughout the league,” Zenon says.

But he explains how working independently can be difficult because the work you put in is ultimately determined by how well the players perform during the season.

The player development coaches for their respective teams pick up the reigns, but players want to add to their games in the offseason. The onus of responsibility then falls on the shoulders of players’ independent trainers, like Zenon.

“So it’s vital for you to be this sounding board of constructive criticism because a lot of the time I think guys just fall in love with one thing that they do great, and then they kinda plateau,” says Zenon.

The ones that are great are the ones that ask a lot of questions, the guys that want to work on the things they’re not comfortable with.

Zenon likes to identify a player’s system, their weaknesses, and their goals, and then get to work. This work entails long film sessions, detailed on-court work, and many tedious actions. Most really great workouts, Zenon explains, are not overly exciting. Shooting for example, requires devout patience and monotonous activity.

“Great shooters always have a great base, their toes are facing the rim, their shoulders are square, they hold their follow-through, all those little things. But that comes with thousands and thousands of shots, where the player eventually feels comfortable.”

It’s all about the little things, and then perfecting those things each and every day to slowly build up the player’s muscle memory and confidence.

Zenon’s work within the world of basketball has led him to meet many players on and off the court.  Forging relationships outside of a professional setting is one of the benefits of being an independent trainer.

Although he’s not his trainer, Zenon has built a relationship with Obi Toppin, a projected top-10 pick in the upcoming draft, and a high school friend of mine. Zenon met Obi Toppin during a pickup game, prior to Toppin’s first year at Dayton.

History in the making!!! #LAFAMILIA

“It’s great to see another Westchester product be able to make it to the NBA. It’s incredible how much work he’s put in,” Zenon gleefully remarked on the amazement of a kid that went to Ossining High School possibly being a Top-3 pick in the NBA draft.

Zenon likened Toppin to Amare Stoudemire, but noted how Toppin has a better jump shot.

“There’s a lot of work that has to be put in to be able to make the kind of jump that he has. I hope fans recognize that.”

Zenon doesn’t just work with NBA players. He trains collegiate athletes, high school athletes, and younger to instill proper ethics and goals that will carry over when they get older.

“When you form habits, eventually those habits will form you,” says Zenon. “You just have to do the little things, and it’ll add up.” 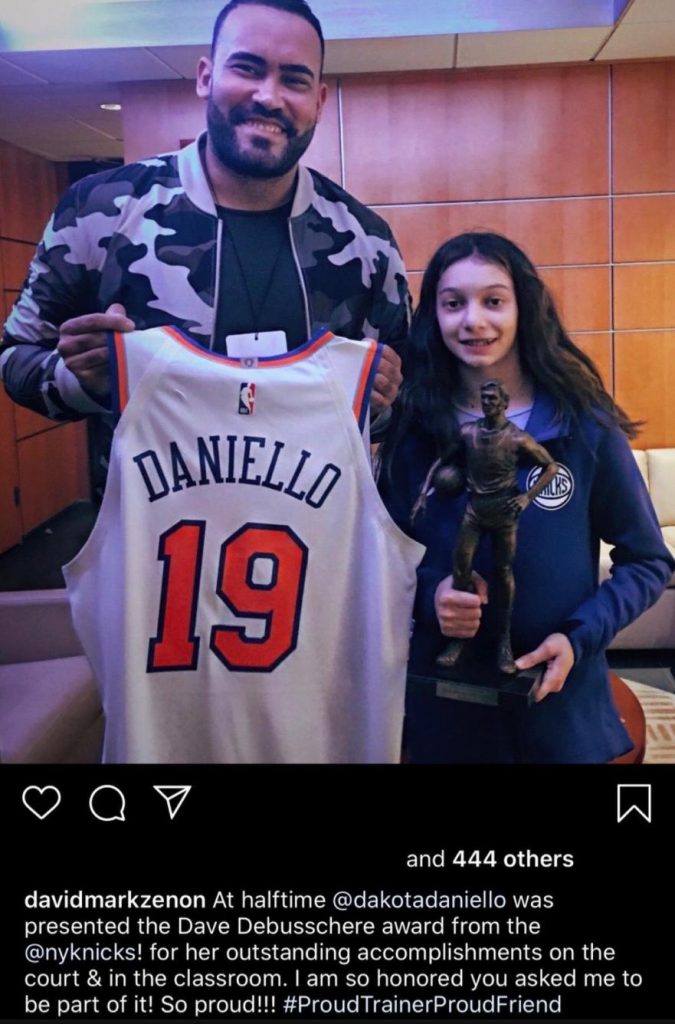 As far as college players, they are in a more rigid system than NBA players are. But on thing is for sure, the fundamentals don’t change.

“Collegiate guys, you kind of have to keep them a little bit more in the box, but it’s not much different than an NBA player.”

Zenon preaches how for whatever field of work you get into, to make sure it is something you love. When you love what you do, you don’t work a day in your life.

You have to consistently do it, but also try to add onto it, even if you’re just getting one percent better each day.

Under quarantine, everyone has been reeling to varying degrees. But now is no time to stop growing. Zenon has been religiously watching film of his players and others, seeing ways he can improve as a trainer and ways his players can better their games.

“It’s something that I can take with me when times become normal again. I do a lot of reading, watching films, things that will help you grow, because that’s the most important thing.”

I asked Zenon what it would mean to be a part of an NBA team in a front-office capacity.

“It would mean everything.” Zenon paused.

“Especially for the hometown team. That’s something that is definitely a goal of mine.”

Zenon is a one-of-a-kind trainer whose consistent work ethic and positive demeanor have propelled him to a position as a staple within the world of basketball training. There is much more he wants to achieve, but sometimes, it is important to also reflect.

Without taking a chance on a high school kid, Zenon most likely would not be in the situation he is in today. Opportunities don’t come around too often. It’s up to us to make the most of them.

What would Zenon tell an aspiring trainer?

“Network like crazy, be transparent, don’t try to do too much at one time. Stay focused on your goal, but do it the right way.”

Previous ArticleWaken Baken: Wiz Khalifa’s 'Kush & OJ' still bumps 10 years later
Next ArticleHow Singer Geneses Bello made it from the sidelines to the limelight
MOST POPPIN’