Chef life before Covid-19: My roots are grounded in community
By Chef Harold Villarosa June 2, 2020

Ever since I was young, I’ve always been attracted to the restaurant business.

Born in the Philippines, I moved to New York City at a young age. I first stepped foot on the concrete pavement of my beloved borough, the South Bronx, on a hot ass summer day in 1994.

The smells carried me as I walked down 3rd Ave. Turning left on Brook Avenue and making a right on St. Anne’s I would land right in front of a restaurant called Caridad.

Smells of oregano, sour orange, and Sazon filled the air while majestic birds rotated on the spit. Their juices jumping from one crispy skin to another and the char from the flames coming out of the rotisserie hissed burned garlic into the window. I was hooked.

From that day on, any time I was able to help my father cook that night’s dinner, I did. We lived in a progressive home where the matriarch of the family brought home the bacon while the patriarch toiled in the kitchen and did the cleaning.

For most of his career, my father was a leader, starting as a humble deck cleaner on a merchant marine boat to becoming the captain after 15 years of climbing through the ranks. I know for a fact that when he retired he received a new Rolex and a thick gold pinky ring that had a ruby red diamond on it.

Coming from a middle class, as good as the middle class gets in the Philippines, my mother was a bonafide badass nurse. When Lebanon was on fire back in the 80s, she met my father. Unfortunately, their marriage was frowned upon at the time with her being a well-off nurse and him hailing from the slums of Iloilo city.

In the end, they made it work and fast forward 20 years later, we lived in the South Bronx as my father ultimately got a job at the hospital folding linens and washing bed sheets for the elderly. Ironically, my mom was the head nurse in that same hospital 10 floors up. Obviously, arguments, frustrations and downright battles came to a head at home.

However, our one place of peace was the kitchen. My father would whip up stuff of magic. He had a trusty cookbook from the motherland that he referred to daily and cooked dishes from his childhood. 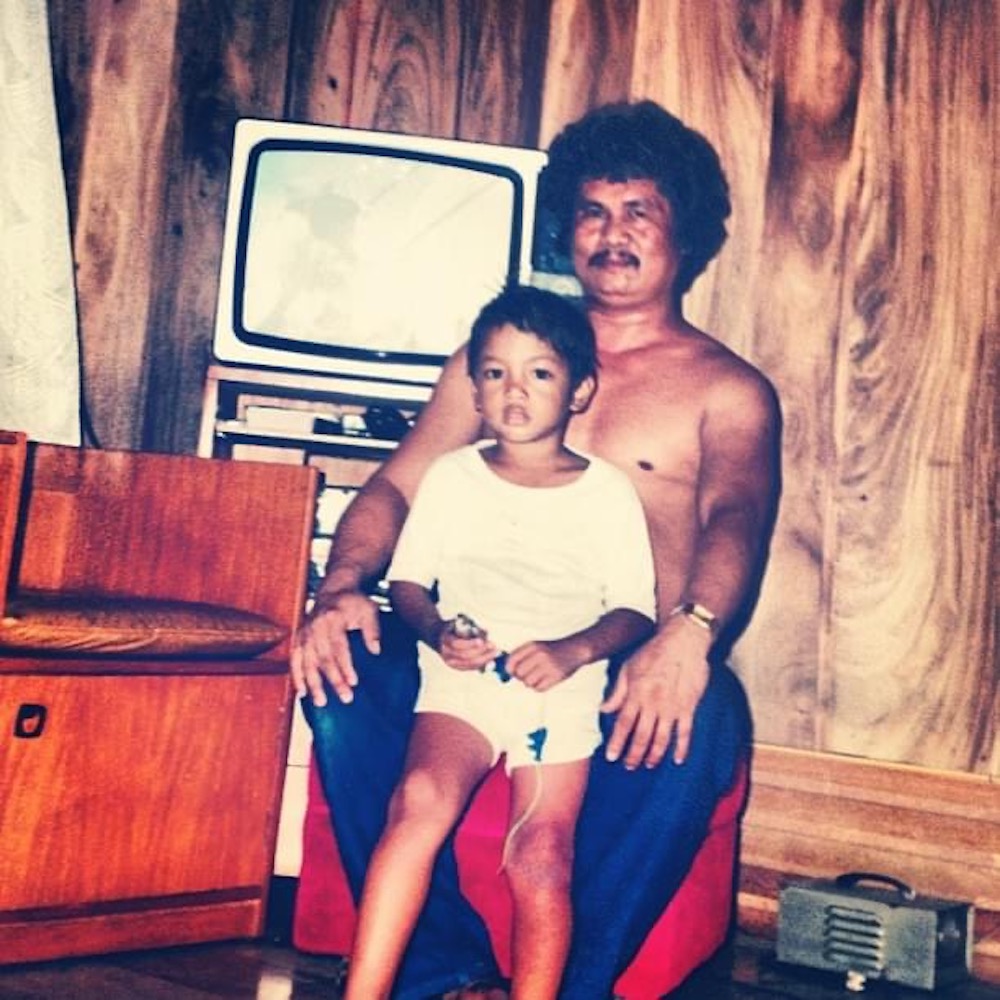 Mongo over rice, chicken adobo, dinuguan, and pinakbet were on regular rotation. And any chance I got to join in and help, he would teach me. My mom on the other hand had a stiff reign on the household as the breadwinner.

So, she dictated what needed to be done. Each of us siblings had to fall in line, from who was on trash duty to who was doing the salad. We were a small kitchen brigade and didn’t even know it.

When I turned 15, I saw a pair of blue Penny Hardaway’s I needed (we called them air foamposites back in the day). I wanted the all blue metallic with the black bottoms but they came at the hefty price of $220. When I asked my mom for some dough she looked at me and said, “McDonald’s is hiring.”

So that’s what I did. I got a job at fucking McDonald’s. I was super happy making $7.25 an hour and just eating as much McDonald’s as possible.

As you know, McDonald’s is not that light but I was experimenting on a few things while I was there. Cheffing it up early on, my signature creations included: the quarter pounder patties in a Big Mac set, hashed browns in between sausage egg and cheese, and my favorite, a supersized milkshake with Oreos and sprinkles.

I also learned one of my most valuable lessons at McDonald’s – the power of food. Each day all types of individuals would be eating McDonald’s. There were people that worked at AMC and TGIFridays on the corner to Jimmy Jazz down the block, everyone needs to eat.

When I saw that, the hustle was created. Each day any one of those customers who were employees at any of those establishments would get free large fries, a burger, soda, or a Happy Meal toy.

And with a simple head nod and a thank you, the deal was in motion. It felt like the Goodfellas when Henry gave his earnings to Pauly after the Lufthansa heist. Each day this would happen and when it was my day off I would cash in.

Just imagine Nas’ “New York State of Mind” blasting in my headphones, as I walked through Penn Station checking in on all my new friends. First, I’ll go check in on my man Dawson, the Haitian homie at Crispy Creme.

“What’s goodie brodie! Let me get a dozen beautiful freshly glazed donuts piping hot, so warm I can feel it through the box,” I’d yell.

Next, I’d walk up to my homegirl Diana at Aunty Anne’s pretzels. She’s a petite Puerto Rican girl from Bed Stuy. We were always flirting but she had a man in the army or some bullshit like that. Whatever. I’d stop for a bit of small talk, then she’d hand over four large pretzels with the sauce warm as fuck too.

As I’d walk up the stairs, skipping a couple of steps to the bass drum, keeping in smooth head bops, and spitting a few bars along the way I’d head to AMC theaters on 34th street.

There I’m treated like royalty skipping the line, like a true VIP and getting my tix. The manager comes out. She and her man are regular customers at McDonald’s and she personally brings me upstairs in the elevator. Approaching the concession stand I shouted out, “large coke and large popcorn please!” My man Kev shouted back “fuuuuuuuck youuuuuuuu,” with a smile.

Now picture this 16-year-old kid in the movie theater with a giant box of crispy cream donuts, four big ass pretzels, a large popcorn, and a large soda. Not a dime spent. As Scarface would say, “The world is yours.”

As I watch Bad Boys 2 on the big screen, I never imagined this same mentality or barter system would catapult me and open doors to some of the best experiences of my life.

I can still hear my headphones blaring out loud now…

“The city never sleeps, full of villians and creeps
That’s where I learned to do my hustle had to scuffle with freaks
I’ma addict for sneakers, twenties of Buddha and bitches with beepers
In the streets I can greet ya, about blunts I teach ya
Inhale deep like the words of my breath
I never sleep, ’cause sleep is the cousin of death
I lay puzzled as I backtrack to earlier times
Nothing’s equivalent, to the New York state of mind”

But, true to form like most hustles it came crashing down in the end. One day the head regional manager called me to the office, and that’s when I knew shit was gonna hit the fan.

Apparently, in the last few months, there was a sting operation with the manager and other members of the team tallying up what food I was giving away. Smiling in my face all day long and ratting me out to the bosses like 6ix9ine.

It got out of hand in one week. Supposedly, I gave away some absurd number like $5,000 worth of McDonald’s food. That’s a lot of Big Macs. Life lesson number one – don’t trust anybody.

Fast-forward to today, and I’m cooking $150 tomahawk steaks and $65 dollar whole branzino in a multimillion-dollar kitchen making more money for the rich and tolling away in the kitchen. I realize it’s time to make a change.

The job description of a chef has changed too. Building a community is the only way. It’s time to take responsibility and accountability. It’s not the individual anymore it’s the whole team that can make that change.

I am and always will be a product of my environment, but I won’t let my environment dictate my future. And I look back at those days with fondness and I smile knowing: New York-bred me, New York made me and that New York fucking city is my home.

Previous ArticleDrop Delivery is creating a lasting shift in cannabis deliveries
Next ArticleBlack and White: The power of one and the fragility of the other
MOST POPPIN’