How Chef Dame Cooks is using his passion for food to help put others on
By Conrad Hoyt September 14, 2020

“My passion came from that frame of… knowing that food is art,” says Chef Damon Ruff. “And at the same time, you could display it as art, and creativity to me at the end of the day has always been [focused] around that.”

Chef Damon is a private chef for, among other clients, former New York Knick Allonzo Trier. What Damon sees right now as a private chef is a market ready to take off, and he has the vision to pair clients together with chefs, ensuring everybody wins. 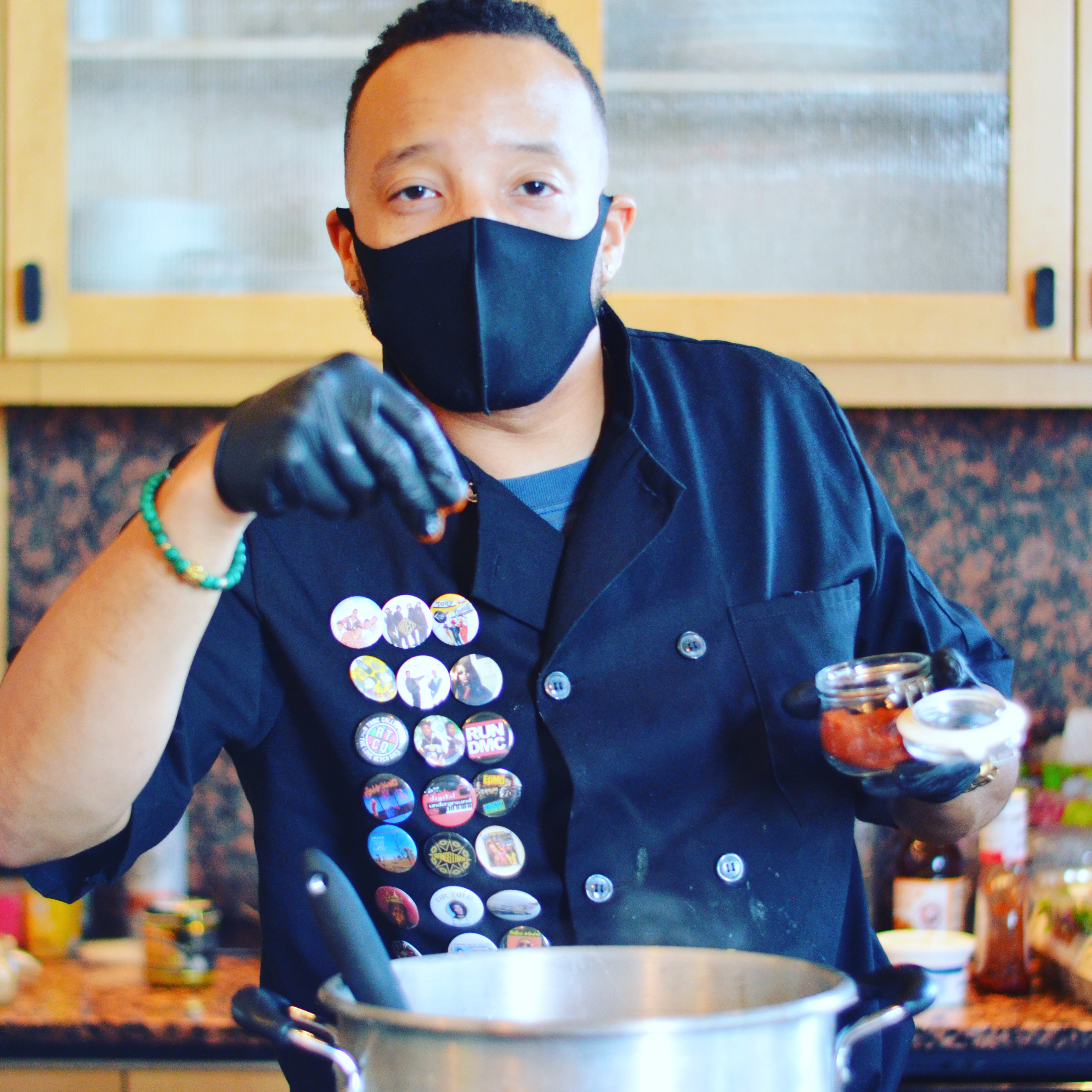 Damon grew up in Columbus, Ohio, and his family’s impact on his culinary aspirations cannot be overstated.

Outside is nice. AND. Football is back tonight I almost can’t believe it 📷 @jqqzxv • #onlyincbus

“It started being younger, growing up in the kitchen with my grandmother. She was a self-taught cook, she was really into recipes, she traveled a lot and just was really into food.”

Damon’s mother would drop him off there, and his grandma would teach him what would be much of his future.

“She was teaching me how to cook all the recipes, showing me food, watching cooking shows… that’s what led me to always have a love for it.”

And Damon wasn’t just a cook growing up. He was an artist and a musician as well, always finding outlets for his brimming creativity. And then sharing his love and innovation with others. 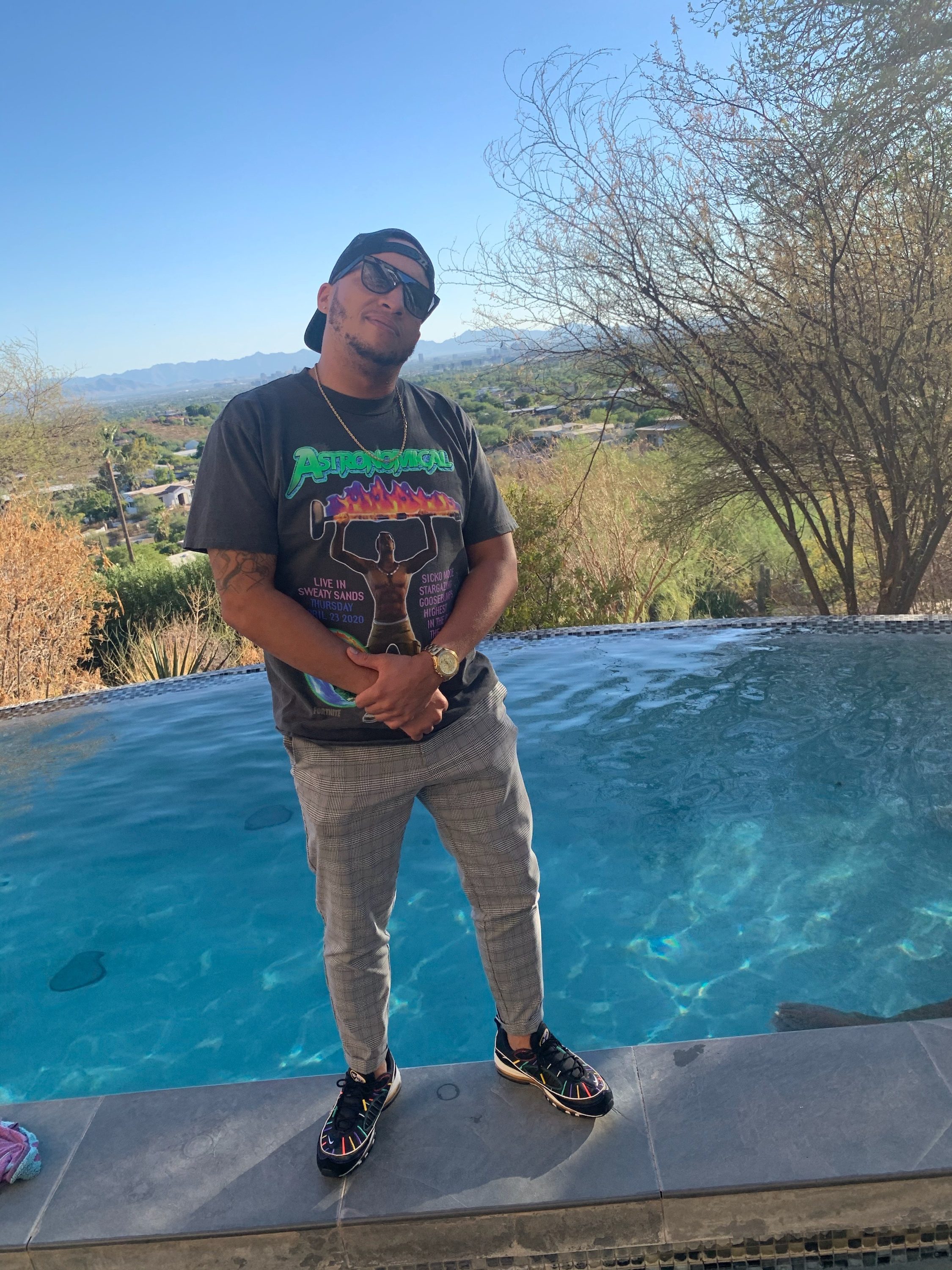 “I used to watch shows all the time, and I would call my friends and be like, ‘hey, man, we gotta try this recipe when we get off the bus.’ Like I was always that guy that just  was all about the hospitality and the ambience.”

Through odd jobs and others more stimulating but ultimately not his passion, Damon ended up where he is today: private chef and full-time single father.

Let’s keep rolling! The best is yet to come.

Damon was clearly weary of dropping names of other athletes he’d cooked for and been around when they were not partnered in any official capacity.

However, it was clear that the verification of other athletes gave him the confidence to move forward in his aspirations, and locking down Trier as an official client was a product of that.

Being a private chef right now

Damon believes right now is the perfect time to be a private chef. With the perils and fears consistent with the pandemic, people rightfully feel weird going out for a meal, and getting food delivered isn’t the same as a meal cooked in your building.

“I feel like this is the time for guys like us to thrive as private chefs. It’s a billion dollar industry because we have the education behind us. We went to school, and we’ve been self taught… we know how to go about our business,” says Damon.

I want to thank all the ones who told me I wasn’t thinking right, working to much for less, takers and manipulators, doubters, clout takers, non responsive individuals. You have made me better than ever, ya’ll have helped me reach a point of knowing my worth from evaluation of others. Always remember what you been through. When your passionate about your craft, amazing at what the results turn into. I’m not perfect, but I’m not oblivious. I vow to be the best, I vow to always be punctual in my delivery of worth. Tapped In.. #privatechef #chefdamecooks #realone #imdifferent

Damon likened it to back in the day when the milkman would deliver milk, or maids and butlers providing a resource to people.

“[It’s about] bringing that hospitality to the client.”

Private chefs provide a vital service. And it’s not just about the delectable food that chefs like Damon cook up commonly… it’s in the relationship private chefs forge with their clients and the comfortability they provide.

“I was in restaurants the past three years, and I was back home in Ohio. When I started to see COVID happening and I saw how it affected a business… people were obviously afraid to come get food. And this is where you see these third party people thriving. Uber eats, Doordash, Postmates.”

Whatever craving you have, you’re gonna want that food, and even in a pandemic, you can get that food.

Often that craving is based off something your grandma used to make, or your mother, or your uncle. And so what a private chef offers, especially in this day and age… you can’t really put a price on it.

“And then at the same time, if you’re creative enough, you tell me, I can make it.” 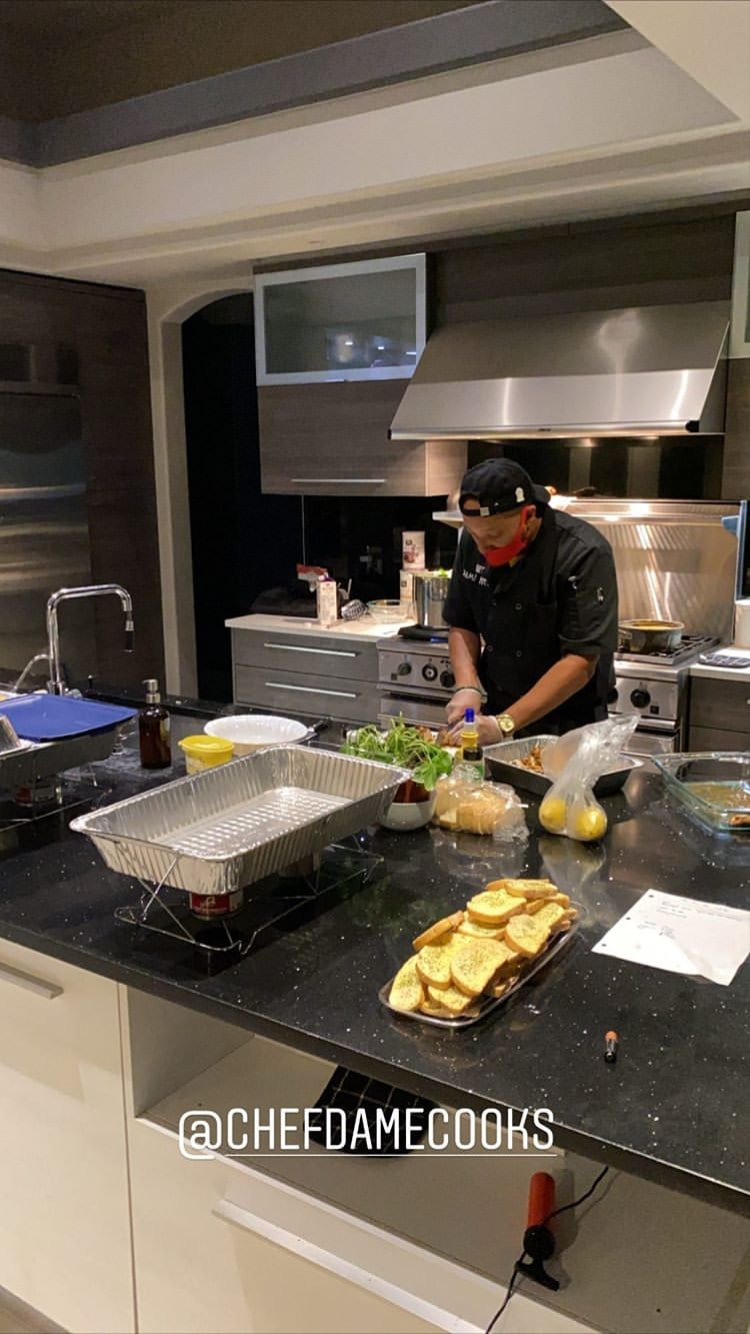 Being a private chef for Damon right now is not just about how he and his clients can prosper… there is a booming service coming that can almost act in a similar manner to home movies.

Years ago no one could have seen home movies becoming more popular than people going out to theaters. Yet they have.

One shouldn’t be surprised if people start to enjoy a private chef making home cooked meals just as much as they do a night out in a restaurant.

Damon has a keen business mindset to where his culinary abilities are not the end game for him. He wants to launch a service that can pair clients with chefs.

Book Me. Nuff Said. Product speaks for itself. 💯👨🏽‍🍳.#privatechef #chefdamecooks @chefboiknox on the 1s and 2s

“For the type of studying that I do, and knowing where these numbers are going and knowing where things are shifting now, this is the best time for anyone to take advantage of still getting what you love to eat, and saving money at the end of the day, because I grocery shop for people too,” explains Damon.

I asked him what it changes when you’re going to a client’s house (especially an athlete) instead of being in neutral territory.

“Just like their life, when they pull out their houses to be able to earn that home, it’s game time. It’s the projection of your voice, being stern about what it is you’re asking, it’s making sure that you’re giving them that experience that they’re going to pay you for.”

It’s also about being yourself, Damon made clear, because at the end of the day, the client, no matter their wealth, is just another person grinding too, with a craft or expertise that has gotten them into that position.

The grind and the vision

Chef Dame’s job isn’t easy, but it is structured. That way he knows he can optimize every day, every minute.

Get the groceries for the week. Sterilize the kitchen. Organize the pantry. Keep the dishes clean.

Be calm and efficient. You’re job is to cook but you’re also in someone else’s temple… it’s important to be comfortable.

Damon asks questions to see what his people like, how they want their food, if they’re willing to try new things.

He has a couple of favorite dishes, one’s that resonate once the platter is licked clean and the table is cleared. 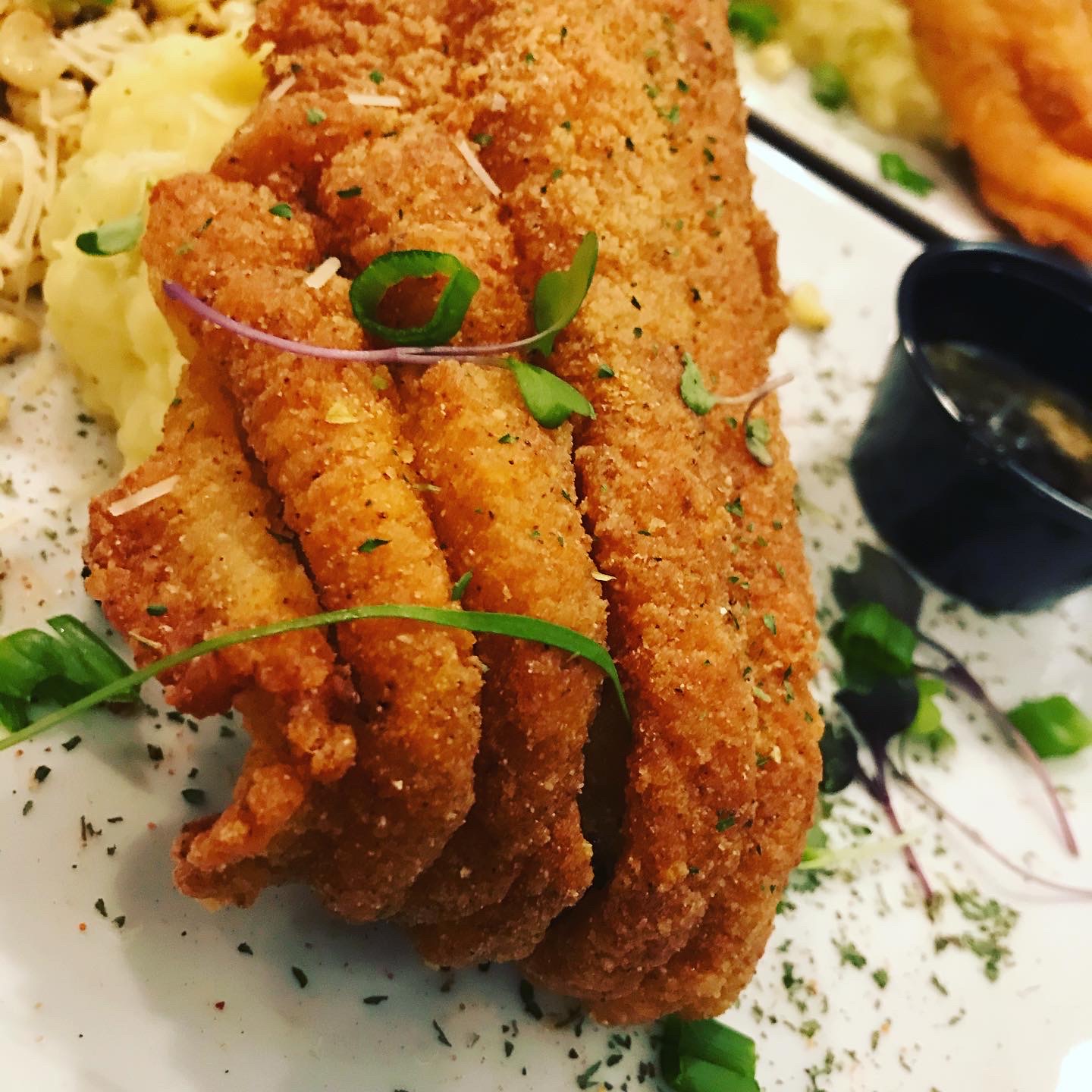 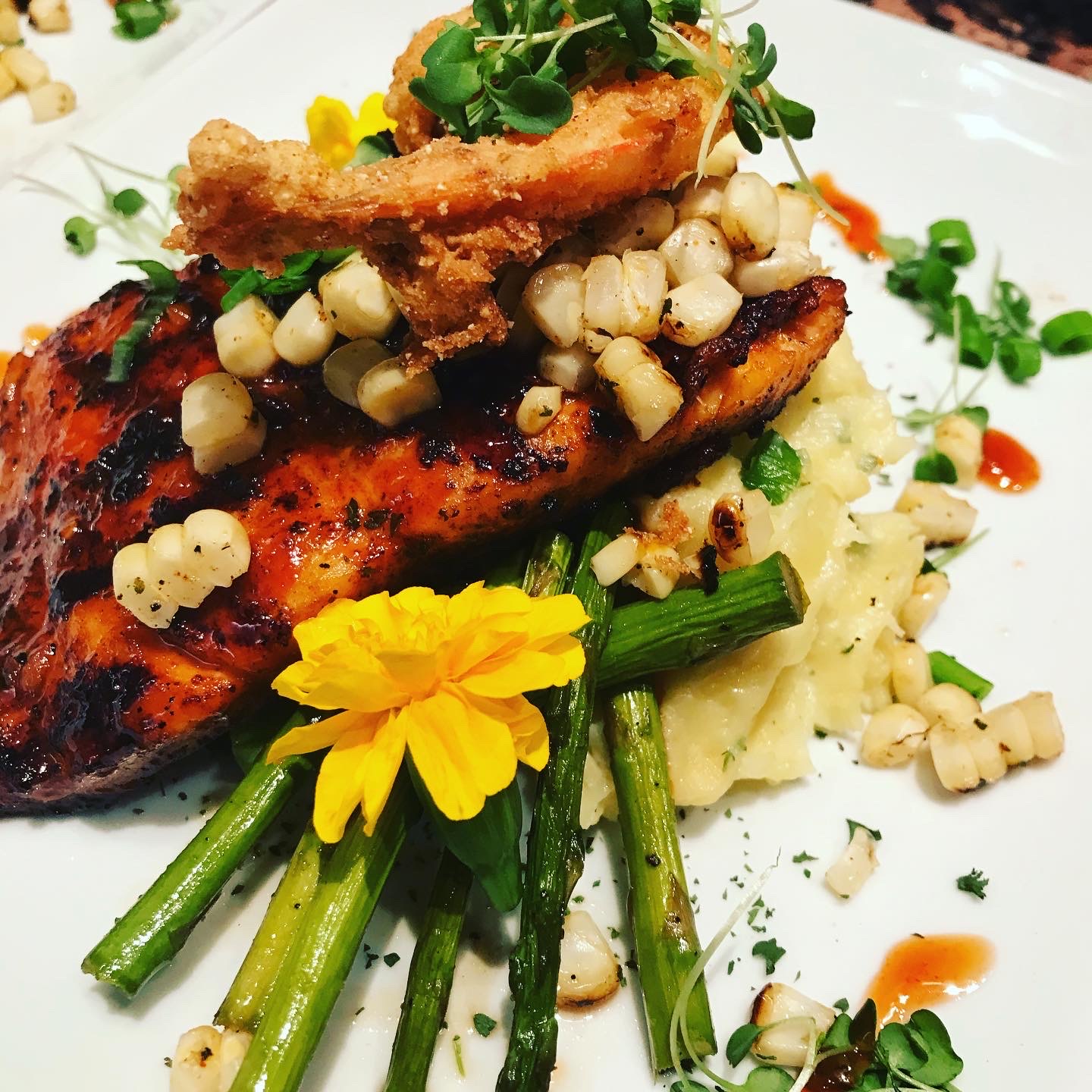 Dame was taught by two vegan chefs in the past three years and both are still around in his life now.

He doesn’t solely cook vegan food, as the meals above indicate, but the knowledge does provide him with an opportunity to tap into a lane all the more common for professional athletes who, rightly, take what they put into their bodies extremely seriously.

Understanding his client’s body type, blood type, their aspirations, is of utmost importance.

“I have two sons, eight and five. I’m a dad. So when I get out of that mode, I’m literally getting 30 minutes to myself… I’m in the car normally listening to music, tryna get hype, get in the locker room mindset,” says Chef Dame. 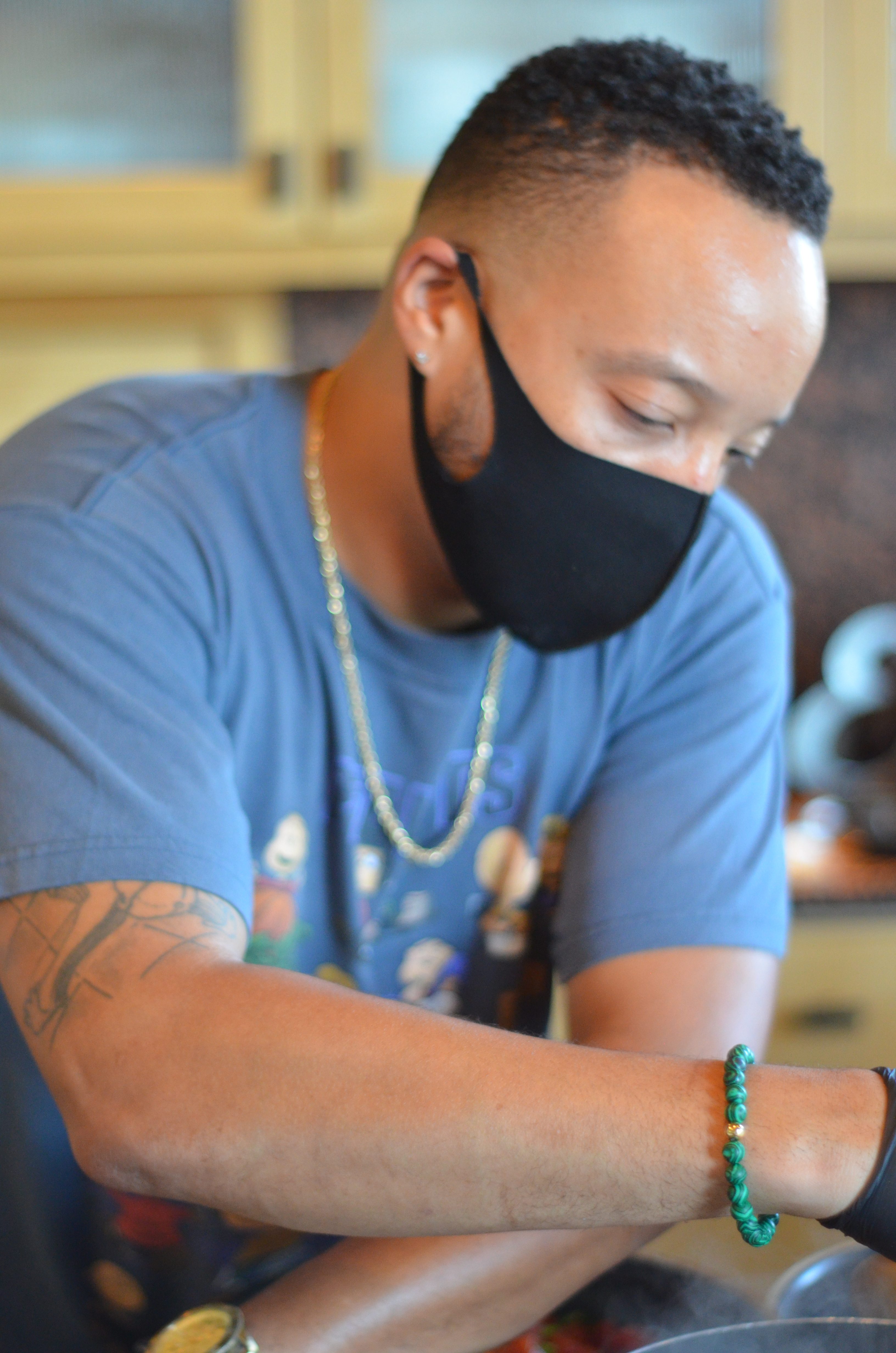 “That’s the cool part about it as well because what they’re trying to do is make sure they get my food out there just as much, so it’s a blessing.”

Damon finds extreme pleasure in watching others try his food. Especially when he’s constantly experimenting and trying to get better.

“I love that I can control the palate. When you taste my food, my flavoring, that’s satisfying to me. I don’t need to eat half the time because my satisfaction is watching someone [else] enjoy.”

I asked Chef Damon what advice he would give to an aspiring private chef.

“Just know that it’s not going to be easy. You have to be able to put yourself in situations to be able to make your craft more effective. Never be afraid to learn from anyone.”

Damon’s goal is to cover various lanes of the chef world. Like Roy Choi, a model example, he wants to open up pathways for other chefs and give them a platform to display their craft and get a bag for it.

Greg and Min are my friends at @finery.la and they asked me to collab on an apron for charity. Finery has designed all my uniforms at our places like POT, Commissary, and Best Friend. They are family who helped bring our vision to life. So, I’ve designed a custom limited edition apron to pay it forward. It will only be on sale for 2 1/2 weeks, starting today, Dec. 3rd (Giving Tuesday) and ending on Dec. 20th. All net proceeds of the sale of this apron will go to A Place Called Home @apch2830 , an organization I have long supported. The apron costs $85 and will be shipped to you late January 2020. If you would like to purchase this apron, please visit www.finery.la/store. You can also visit www.finery.la/collaboration for more detailed information on my apron along with 3 others in the series.

Ultimately Damon loves cooking for athletes because he’s a sports fan. He wants to be the one that athletes call when they need a chef.

In that lane, he’s helping out two different sources and making everybody happy.

The opportunities are blossoming for Chef Damon, and it’s no surprise as to why. He’s putting everything he’s got into the daily grind, while still seeing the bigger picture.

He’s managing clients’ diets and calories, the specific ingredients in their meals. He’s setting up the ambience and making sure there is warm hospitality at play when he is working the room.

And perhaps most importantly, Damon is humble and measured in his approach to the business side of things. He wants to help others, he wants to be the go-between for chefs looking to get a gig and people looking for a private chef.

“I know the man upstairs is leading me because I always get dropped into situations I speak into existence.”

Say that Chef. And watch it manifest.

Previous ArticleSandals: The footwear conundrum sneakerheads know nothing about
Next ArticleMessi's decision to leave Barcelona exposes the dark side of soccer
MOST POPPIN’