With the spread of COVID-19 and social distancing requirements at six feet, plenty of gatherings have been postponed and then canceled. Several of these gatherings are concerts and festivals that were expected to take place in the following several months.

What has taken place for this IRL music venues? Perhaps the digital world can save us.

Slovenia-based music data company Viberate has put together a comprehensive list of postponements and cancelations at www.sickfestivals.com, updated daily. The service monitors around 5,000 festivals worldwide and lets you know which ones are canceled or postponed, so you can plan accordingly. 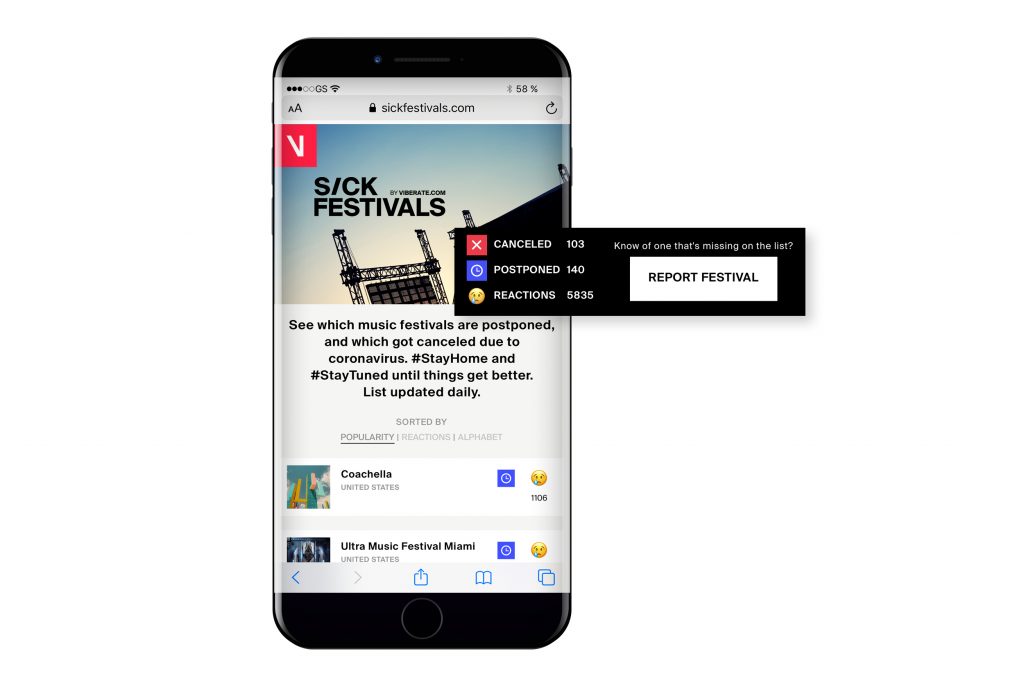 While Vibrate seeks to be the IMDB of music, the data is sourced from Viberate’s massive global database of artists, venues, events, and festivals. They’ve identified 236 canceled and 250 postponed festivals and counting.

The damage will go into billions,” explained Viberate’s founder and CEO Matej Gregorcic.

“The production costs of a mega festival often exceed $100M. Our service monitors around 5,000 festivals and more than 400 have already announced they will cancel or postpone. Festivals that have been canceled in time probably won’t get hit too badly. Fans, however, will. Mostly emotionally, but if they don’t cancel their travel arrangements in time, it can also hit their wallets…”

So how have artists been connecting with their fans? Many have gone digital.

Canceled music festival? Take it to the streams

Dua Lipa and her band recently did a show for Late Late Show with James Corden, separately each from their homes via Zoom. They performed “Future Nostalgia,” quite an accurate choice considering the times we live in.

Sending you all love and healthhh from OUR HOUSE TO YOURS ❤️ #Homefest @j_corden. #FutureNostalgia out nowwww

Cardi B also connected with fans via IG Live last weekend. The Rhythm and Flow host created her own competition and played karaoke with lucky fans and select users.

The Weeknd pulled up to IG Live several times playing snippets of unreleased songs and smokin a quick blunt.

Timbaland and Swizz Beats even had an IG Live Beat battle to settle an old bet.

Other artists like JOJO have remixed their own songs to promote good health practices.

Not to mention Tory Lanez has been going off on his IG Live. Recently, he broke a couple of viewer records when he invited Drake to join in. Mans had over 300k fans watching at once.

Music platforms are also holding it down

Music Platforms have also gotten on the digital plane.

“Just because we’re keeping our distance doesn’t mean the music has to stop. Join us daily for live streams from around the globe — follow artists live from their homes as they share music, stories, and more.”

Tidal is live streaming concerts for free on their site during this COVID lockdown. An At-Home With TIDAL streaming marathon kicked off March 25th and on Saturday, March 28th TIDAL aired hip hop concerts, and on Sunday, March 29 it broadcasted R&B performances. Latin, pop, and electro also aired that Friday.

Several music streaming platforms have playlists created by users from “The Corona Cure” on TIDAL to Corona Playlist to Self-Quarantine and Relax to on Spotify with bops like “Mask Off,” “Self Care,” and “Can’t Feel My Face.”