This past Thursday (April 12th) a video showing two black men being arrested and escorted out of a Philadelphia Starbucks went viral after Melissa DePino, who had the presence of mind to capture the moment, uploaded the video onto Twitter.

According to the store manager, the two gentlemen asked to use the restroom and were told they first had to make a purchase. It was after sitting down and not making one that the local authorities were called, causing the scene you see below.

“The police were called because these men hadn’t ordered anything. They were waiting for a friend to show up, who did as they were taken out in handcuffs for doing nothing.”

@Starbucks The police were called because these men hadn’t ordered anything. They were waiting for a friend to show up, who did as they were taken out in handcuffs for doing nothing. All the other white ppl are wondering why it’s never happened to us when we do the same thing. pic.twitter.com/0U4Pzs55Ci

As you can imagine, the video caught fire on all social media platforms causing major backlash from community activists and ultimately leading for a call to #BoycottStarbucks.

Waiting in a Starbucks while black is a crime? As many people as I see taking up space using their internet/bathroom w/o nary a cup? #NeverAgain @Starbucks https://t.co/lp41iIxrva

My dad sits around Starbucks for hours and nobody says a word to him about it.

He's a 69 year old white man, so that might have something to do with it.#BoycottStarbucks

At first I was reluctant to call Starbucks racist based on the actions of some of their employees. But after seeing the video I can’t believe Starbucks didn’t take a bigger stand for their employees poor actions.

There are plenty of local coffee shops ☕️ #BoycottStarbucks

That following Saturday, in an open letter to Starbucks’ partners and customers, CEO Kevin Johnson responded by calling the incident “reprehensible” and reiterated his culpability in a video the next day, Sunday.

To further express his remorse, Johnson made an appearance on ABC News’ Good Morning America Monday to, again, personally apologize. In the interview with Robin Roberts he said he takes full blame and wants to meet the two men to personally “make it right.” Now, just today, it was announced that on May 29th, 8,000 Starbucks will close for racial-bias training, showing action behind the CEO’s words.

Yet, somehow, a call to #BoycottStarbucks still stands.

Rappers like T.I and actors like The Wire’s Wendell Pierce are just a few that have been at the forefront of boycotting the retail coffee giant, urging their fans to spend their money elsewhere. Even Kevin Hart, who is native to Philadelphia and has a strong online following, also got onboard, tweeting that they must “make this right.”

Under the #BoycottStarbucks hashtag on Twitter, people have been standing in solidarity behind the accused the racially profiled men the men, stating unfair racial bias.

The only problem is that the problem isn’t Starbucks.

It is undeniably true that the two men at the Philadelphia Starbucks we’re racially profiled and embarrassingly arrested for doing absolutely nothing.

It is indeed a fact that the police could have de-escalated the situation in a proper manner; no one isn’t saying repercussions aren’t due. But it’s absolutely asinine to make this isolated incident a general one.

What I’m speaking of is problematic protesting.

Being “woke” is in vogue. The political, racial and ethical activism has gone from a place of genuine concern and hard work for the better good to just another fashion accessory, especially for those under-30. In 2011 it was Occupy Wall Street; in 2014 Black Lives Matter took life. 2017’s Women’s March was huge and in 2018 students showed bravery during National Walk Out Day.

While all these causes valid in their own perspective right, they’ve also ushered in a culture of ‘jumping on the bandwagon’ of causes and made protesting popular. Before processing these incidents and taking them for what they are, there’s a bloodthirsty need to “cancel” the next brand or boycott the next corporation, regardless of how effective it will even be.

During his Good Morning America interview Starbucks CEO Kevin Johnson was flat out asked how and why this could have happened and his response was not only genuine but made common sense.

“With 28,000 stores around the world, different regions put in some slightly different guidelines in how to handle certain situations,” he said. “The guidelines that they had in place indicated a certain set of scenarios in which the police were to be called…Now, there are some scenarios where the police should be called…in this case, none of that occurred. It was completely inappropriate to engage the police. So clearly there’s an opportunity for us to provide clarity and in addition to that training… What happened to those two gentlemen were was wrong.”

He did not hedge, he took full responsibility, said he was going to fix it and had no equivocation. We rarely see a CEO make apologies and own up to what they’ve done and Kevin has done that abundantly so.

I’m no Starbucks loyalist nor do I have stock invested in their company, but if we’re going to hold entire brands and organizations accountable for the actions of their employees, shouldn’t the boycott list be longer? I’ve been followed around at a Ross before but best believe I was back when I heard they were having a sale. 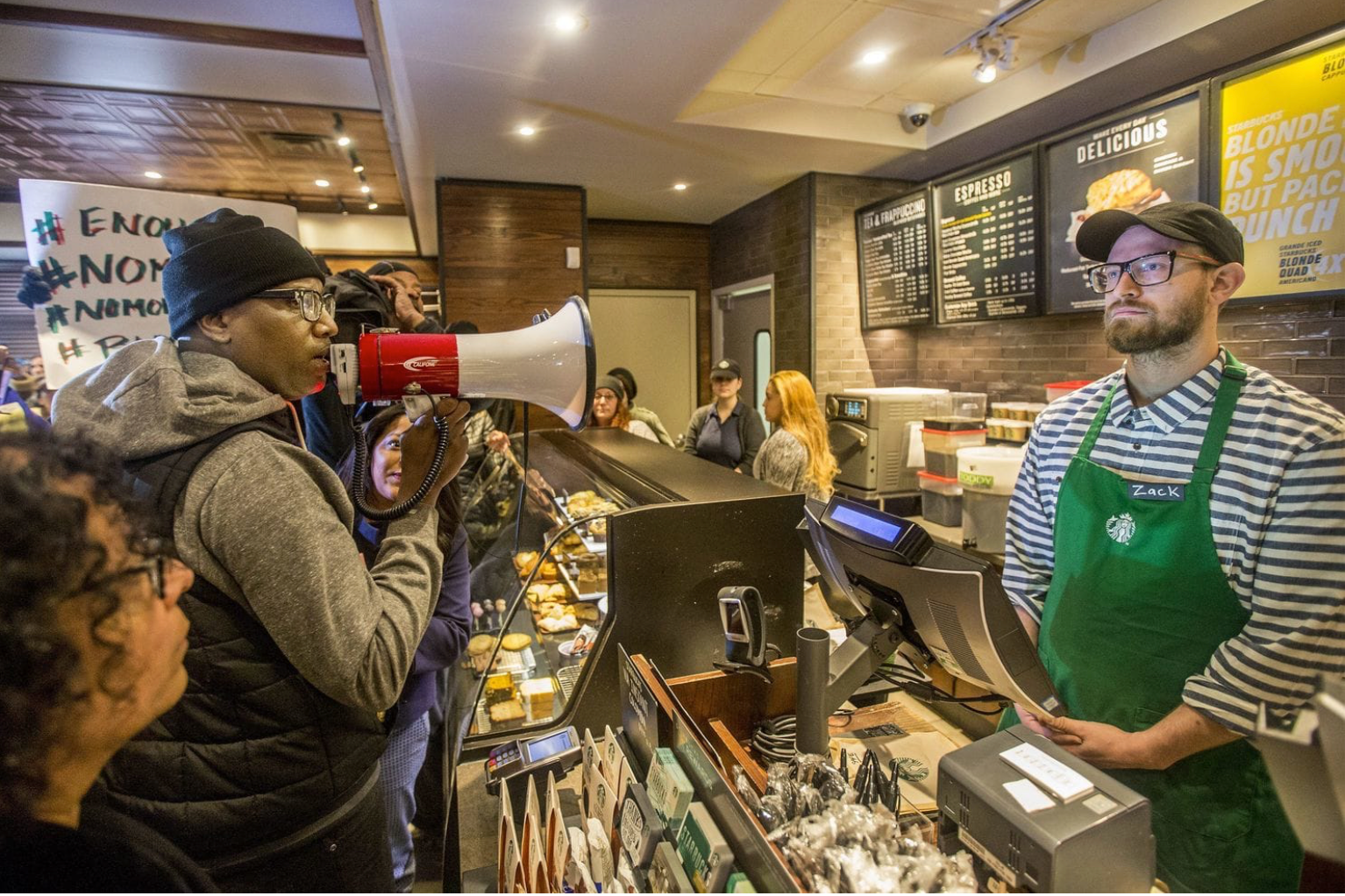 As much as protesting may make you feel good inside, the truth of the matter is that you’re not accomplishing anything not punishing the right people #BoycottingStarbucks.

Protesting is necessary but insufficient. the idea that a workplace must be disrupted to undone injustices is a backwards way of imagining activism. It really starts with what you do every day, individually. You’re fooling yourself if you think you can be a revolutionary for the weekend.

It’s about time we think past movement politics. We don’t need more marchers, we need more mayors. Yelling through a megaphone and raising large obnoxious signs flatters a certain idea of heroism: that the fight starts and ends with authentic people. Yet that’s incredibly one-dimensional.

Protesting becomes problematic when we become lazy. Fighting for rights goes beyond the reach of your finger’s tap for a hashtag and is more than standing in the cold to demonstrate, and it certainly isn’t getting behind any and every perceived issue that may arise.

Starbucks didn’t mess up, their employee did. Don’t protest for the culture, protest to make a difference.

Previous ArticleMaximize your potential: 3 things you need to do to get the most out of life
Next ArticleMeet Alim Smith, the Afro-surrealist painter inspiring through pure artistic expression
MOST POPPIN’