Yes, ‘Black Panther’ is unapologetically black. Get with it or get lost.
PHOTO CRED: Marvel
By Joshua Eferighe February 2, 2018

If you’ve been following the Black Panther film since it was announced three years ago, it’s very possible that you may have perceived a special, unusual even, unification behind its unveiling and pending release.

For starters, it’s already has the record for most advance tickets sold in the Marvel Universe, beating previous titleholder Captain America: Civil War, it’s tracking to open at an eye-popping $100 million-$120 million at the North American box office, and critics who were lucky enough to catch the advance screening have given the film rave reviews.

But far beyond the film’s hype — any superhero movie these days can attract an audience — is the galvanization that’s been building behind it; a rallying and momentum that’s somewhat cultural, that some may even find Black-ish.

If that’s what you’ve been sensing and seeing since the films announcement it’s because you’re right: Black Panther is unapologetically Black.

A king will rise. Get tickets now to see #BlackPanther: [link in bio]

And from top to bottom, inside and out, Marvel clearly was on board with making it that way.

Look at the cast. In an industry where whitewashing has been deeply embedded in the culture’s fabric for years, Black Panther managed to secure a cast that is majority black, making it the first of the Marvel films to do so.

From the director, Ryan Coogler (Creed, Fruitvale Station), to the lead and supporting cast, like Don Cheadle, Samuel L. Jackson, and Lupita Nyong’o, the movie is star-studded with Black actors.

The storyline, too. The lead character, T’Challa (played by Chadwick Boseman) has to defeat a longtime enemy (Michael B. Jordan) to preserve his African empire of Wakanda to assume his rightful place as king. The best part is that it’s consistent with the comic: Black Panther is depicted in an all-Black universe where Black people rule with supernatural abilities.

If that ain’t the Blackest storyline I’ve ever heard, I don’t know what is.

It makes sense why the African-American community feels a personal connection to this film: in many ways and to a lot of people, this is the homecoming of America’s first Black superhero. And the fact that a studio as big as Marvel is not only putting their dollar, but their effort behind making an all-Black film, makes it that more special.

Last year, in clear respect for the film’s constituents, Marvel studios decided to switch the portrayal of one of the main characters of the film. M’Baku, a hard-bitten, ruthless warrior who first appeared in Avengers #62 in March 1969, was originally draped in white fur under the moniker “Man-Ape”, but, for the sake of the film, was given qualities that portrayed dignity and strength.

Thats not the only way the influence of Black Panther supporters have made their presence felt. On January 7th, a Disney fansite, Disney Pins Blogs, posted an old Black Panther pin from 1941 where the Black Panther was depicted by a white man and people were not having it.

The uproar was so loud, the Pins Blog had to make an official apology as well as explain that it was a “lighting issue.” 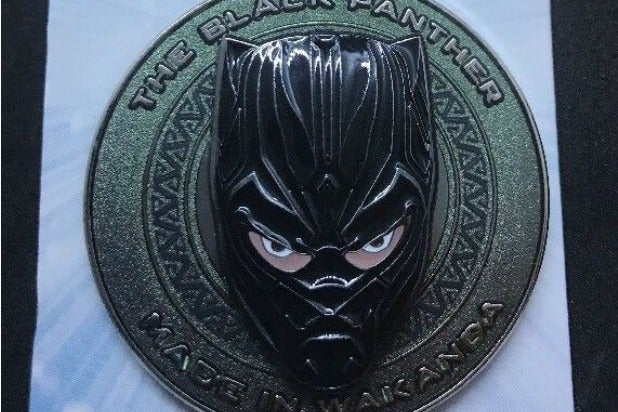 The Blackness has been infectious, too. From the fanbase to the cast, it’s clear that the film is more than just a superhero movie, it’s a moment for African-Americans in cinema.

On Monday Jan 30th, the studio sent its invitation for the premiere in Hollywood with a mandatory dress code that read: “royal attire requested.”

What resulted was a red carpet full of vibrant hues, bold patterns, and outfits inspired by traditional African clothing.

What a night! What a phenomenal film!! Congrats to all the amazing folks behind @blackpanther

The cast of #blackpanther looked like royalty on their purple carpet! Amazing!! Especially in love with my favorite male on earth @michaelbjordan ! I can not deal with his perfection. Anyways I have not been this hype for a #marvel #film in years!! So excited to see it! #filmmaking #director #inspiration #writer

The overt Blackness that oozes from the Black Panther hype is just as timely as it is necessary.

Sure, there was Wesley Snipes’s Blade and Hancock starring Will Smith in 2008 was fun, but there’s yet to be a film with this kinda of cast and backing yet. In fact, before Blade, the only major comic book movie with a Black man in the title role was 1997’s Spawn, starring Michael Jai White.

Even if one does point to Netflix’s Luke Cage and the CW’s Black Lightning as examples of Black leads, they don’t attract the viewership or have the reach that Marvel Studios does.

What a better time than now, with this administration, with the groundbreaking #metoo and #timesup campaigns, to introduce the world to its first bonafide Black superhero and keep breaking boundaries?

After 17 films since the Marvel Cinematic Universe began, Black Panther will finally represent people of color; Kendrick Lamar is producing the soundtrack and its already doing numbers. If you can’t be supportive of the Black pride that innately comes with this film, then maybe it’s not for you.

It’s at times like these where we should appreciate, not question, rallying behind a common cause.

Black Panther is unapologetically black, and it’s about damn we had a film that was.

Previous ArticleBest new tracks of the week: The Weeknd and Kendrick, Rick Ross, Lykke Li, & more
Next Article#GirlsBehindTheGames is inspiring more women to break into the gaming industry
MOST POPPIN’