Ever worked at a 3-star NYT restaurant? You might not want to
PHOTO CRED: Yente Van Eynde from Pexels
By Chef Harold Villarosa June 10, 2020

Chef’s note: Names have been changed for the sake of defamation – and the drama it might bring.

As far as reviews go, especially from a ballbuster like Sam Hass, this was like being nominated for an Oscar. This wasn’t Mr. Henderson’s first and wasn’t his last. The past two tenants of the space in the trendy (and rich as fuck) Tribeca area also received this particular award.

Ever since the doors opened in April of 1985 the culinary individuals that walked through and cooked in this kitchen are what you would call chef royalty. The first chef was young and ambitious as he created classic French dishes that helped make the once ghetto area of Tribeca into the posh area it is now. He then proceeded to create his own empire a few blocks down and became one of the best chefs in the country.

The latest tenant didn’t come until 2008 when a revamp was needed and like always having an eye for talent, Mr. Henderson tapped into his young upstart, a new radical chef. Having worked at Marco Pierre White in London and Pierre Gagnaire in Paris, this guy was the real deal. With him leading the team and the new restaurant, not only did they receive a 3-stars from NYT but they earned a coveted 2-star Michelin review.

So fast forward to March 2014 — I was finishing my stint at the West Village gem Fedora. There was a buzz in the culinary world about the chef at this No Name restaurant and the team he was putting together, a squad of culinarians, to open this new establishment. Having also worked for Gordon Ramsey in London and Charlie Trotter in Chicago, this was the most anticipated opening in NYC.

I don’t remember how I got into this conversation, but as it usually goes in this industry someone vouched for me. I met the chef and we just talked about food and nothing else. It seemed so focused but at the same time, he knew the type of people he wanted to work there. After exchanging our food philosophy and how we felt about the craft, he hired me.

Our team was diverse and consistent with fine dining. There was Ryan from New Orleans, who just did a stint at Daniels, working the cold station. Crazy Phil who just left Aureole worked the fish. Paige, who also came from Daniel, was on pastries. Justin, the junior sous chef, was from Per Se and lastly Big Mike working meat from Bouchon bakery. Then there was me working entremets from Fedora. 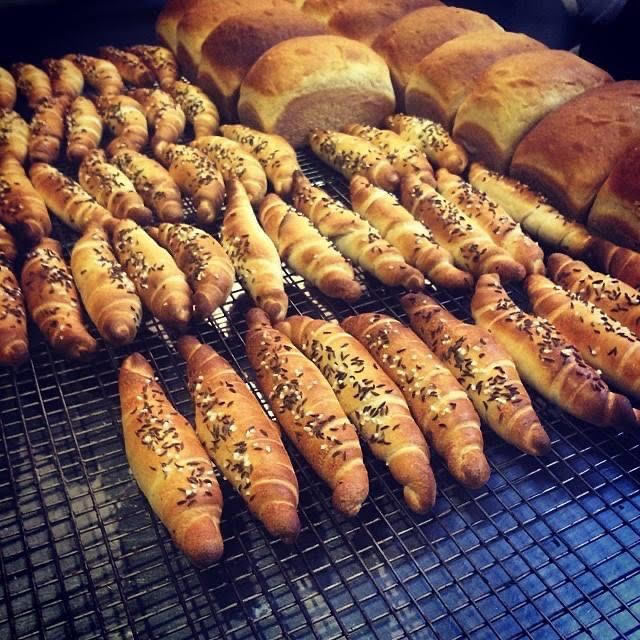 The chef’s philosophy was to push yourself until the casket dropped. We were all given a binder with recipes and pictures of the dishes. Obviously I’ve worked in Michelin-style kitchens before but as the help — not the main guy. So I was super intimidated and that hindered me and created a lot of the problems that I experienced.

10 am – gather vegetables in the walk-in and put all away deliveries. 11 am – start veggie production for the station, from celeriac root purée to roasted eggplant purée, Bruniose 2 quarts of eggplant, 2 quarts of red pepper, and 2 quarts of zucchini.

If you worked in that kitchen you know, the basement is where the storage was and I lived down there. Dehydrating parsley in the microwave to make parsley powder, slicing the eggplants on the slicer so you have even cuts, and don’t forget to clean it! Because if you don’t you will get a new butthole opened by the sous chef. 1 pm? Shit! I’m falling behind! Whose watching your purées?

Shit, I burned the fucking eggplants – gotta start over! What time is it? Shit, I got to make baumkuchen! For you guys that don’t know baumkuchen, it is a layered cake famous in Austria and it’s made of whipped egg whites with cake flour and it’s cooked thin, layer by layer in the salamander. Shit! It’s 2:30 pm! Gotta make a family meal in the next hour and a half I have to:

Once I look up it’s 4:30 pm and I am way behind. The station looks like a tornado came through and said fuck you pay me! Gotta heat this cold pasta real quick before service! Everyone else’s station was clean and ready and I was just overwhelmed. Don’t ask for help! You’re the man! You can do this! Life lesson learned – ask for help stupid.

Chef asks me right at 4:45 pm just to fuck with me, “Haroooold, did you make pasta?” I froze, white as can be, sweating my balls off, making sure my station was set up. I forgot the fucking pasta. I look up sheepishly and said, “no, chef.” With a cunning smile and sort of “watch this young buck” look, he pulls out pasta dough beautifully kneaded and rested, pulls out the pasta machine, and in a matter of 15 minutes shows why he’s the head chef.

Beautiful sheets of pasta shimmering in his hand, arms waving like he’s conducting an orchestra, with the dust of Caputo flour dusting the wooden table as he bangs out 15 orders of tagliatelle pasta in front of me. My romantic monologue gets interrupted by the chef de cuisine Yosef, a big ogre looking motherfucker, screaming at the top of his lungs, “Is your station ready asshole, or are you gonna stand there and jerk off to chef making pasta?!” 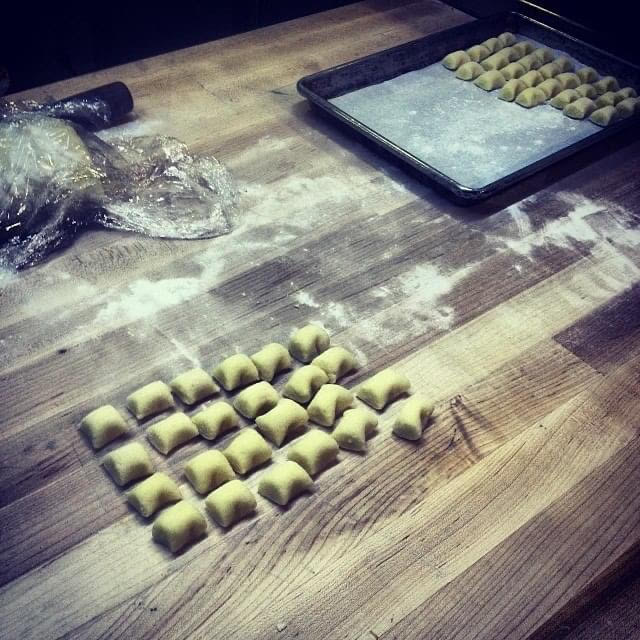 I hurriedly cleaned my station and wait for the first call, “Chomage!” (Which is French, btw!) I had no clue what he was saying but figured it out – he was calling out the order. “Chomage! One tagliatelle, beet salad, octopus pastrami, on back veal, turbot, rabbit.” In unison, without fail and at the same fucking time I yelled, “Oui Chef!” Mind you none of us spoke French but for some reason, it guided our life.

Now I’m getting my pots on the plancha, buerre blanc the veggie for the rabbit dish, grilled leeks for turbot, blanch my pasta, run to the front station to start marinating beets and laying down the lemon yogurt. Run back and make the sauce for the pasta – add the caviar – don’t burn the leeks! Run back, plate the beets, and pull all pots back before they over reduce.

Chef’s system was the Gordon Ramsey system so every fucking 30 seconds from 5 minutes out we had to tell each other “5 minutes out.” Once we get down to zero, you should have all your pans to the chef so he can taste and plate at the pass. This would go on till 10:30 pm and we would take one hour and a half to clean up and go home.

So this is what it is – it’s a kitchen and chef had it that way. One night, supposedly six chefs from whatever land that had Michelin stars up their ass were having dinner at our restaurant. They were the last table, a six top, and for the grace of god they ordered every entree on my station.

I remember this night so vividly. Everyone else was breaking down and it was Mike and I dealing with this table. He had two dishes and I had the other four. I had to get the veggies ready for his dishes and also for mine. So just imagine about 12-13 small handled pots lined up on my station seasoned well and ready to go.

Chef fires up the table. I bring them all back up to temperature and start passing everything up. He’s tasting and nodding his head so I thought I was good. He was up to the last dish and asks for the leeks for the turbot. I froze I totally forgot them.

I drop them on the grill and yell out, “20 seconds!” I turn and all I see is rage and anger in his face as he scolds me saying, “You’re a fucking loser! Do you want to be a superhero? Who the fuck you think you are? You are nothing!” He picks up the plates and tosses them towards my direction and says, “start over!” I wanted to die that night. Just a samurai sword my head off.

I failed the man, He was trying to impress his friends and I blew it. Our relationship became sour after that and he never forgave me.

Fast forward to the day the NYT article comes out. Everyone was jubilant and going crazy. I had no clue what was going on, just moving along trying not to be yelled at today by these white guys.

Chef walks over to everybody and either shook their hand or gave them a big hug, congratulating each person like they won the lotto. When he approached me he had this look in his eyes, as a father does to a kid that just got spanked and is hyperventilating. He said, “congrats chef,” and just gave me a high five. I’ve never felt so down in my life. I knew then I didn’t belong there and had to move on. Two weeks later I gave my notice and proceeded on my way out.

I’ve never shared this story before to anyone. It was one of the lowest moments in my life as I began to dive into a deep depression. Was I good enough? Did I belong in these elite kitchens? As I moved forward in life I learned it was moments like these – even though hard and difficult at the time – are what made me.

I learned to cope, and in the end, I understood empathy. I lead with that now – knowing where a person comes from and knowing what it took for them to get there. I learned wonderful and hard lessons there.

But one lesson, in particular, that sticks with me every day: never forget where you came from, otherwise, you will become an asshole. That is now embedded in my soul.

Previous ArticleLet's talk about Ayman Safiah: Palestinians are fighting their own battle
Next ArticleHere is how to keep those vintage t-shirts fresh for any occasion
MOST POPPIN’